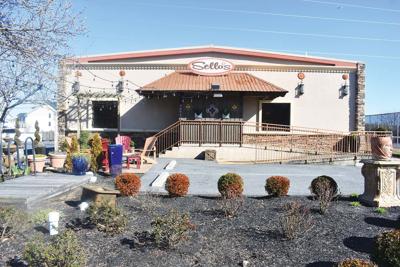 (March 13, 2020) After collaborating with the original owners since last August, Justin and Brittney Acita became the new owners of Sello’s Italian Oven and Bar in West Ocean City last Wednesday.

Located on Golf Course Road in West Ocean City, the restaurant has been a favorite of locals and frequent visitors since opening in 2015, when restauranteurs Pino and Karen Tomasello converted the former Avery Gallery building to a distinctive bar and dining room, with a menu of traditional Italian fare, brick oven pizza, and American dishes.

The Acitas have a long history with the Tomasellos, which helped the ownership transition after Pino and Karen decided to retire after decades in the industry.

“Karen and Pino owned Frescos, which was in town on 82nd Street, which is now Ropewalk,” Brittney said. “I worked for them for seven years as their head server there, so that’s how we crossed paths. Even when I stopped working there, we remain very close friends.

Since the end of last summer, the Acitas have worked with the Tomasellos to learn their cooking methods and to ensure the recipes remain the same.

“Nothing will change taste-wise on the food that is on the core menu,” Justin said. “But we’re going to do our own thing with specials and stuff to add additional items to.”

According to the couple, they have been warmly received by the restaurant’s patrons.

“The reopening was really good,” Justin said. “There were a lot of good vibes.”

According to Brittney, the restaurant served more than 100 dinners last Thursday, the Acitas’ first night as owners, and the place remained packed throughout the night until closing time.

Justin and Brittney plan to continue holding wine tastings, as the Tomasellos did, and create their own special menus like adding burgers, clams and mussels that will be cooked in the wood-fired oven.

The Acitas assure that the main menu items will remain the same. This includes the Pasta all’Ortolana, Fiocchi Rosa, Tortolloni di Manzo, Salmone Oreganata, Vitello Sello’s, wood-fired pizzas and a variety of desserts and cocktails.

The Acitas said they will continue to own and operate Pickles Pub, as well as their two other businesses – a liquor store and the Original Pickle Shots – but are eager for what the future brings at Sello’s.

There are also plans to have special events throughout the year, including an appearance by a friend from Nashville who challenged and beat celebrity chef Bobby Flay on Food Network’s “Beat Bobby Flay” later in the fall.

Sello’s, which can seat around 150 guests, is also available for private parties and accepts reservations.

“The atmosphere is just very different than most places you find down here,” Brittney said. “It’s very warm and welcoming. You really don’t feel like you’re at the beach, which sometimes it’s nice to check out.

“We’re just really honored that Karen and Pino chose us of all the people to do this,” she continued. “We’re really thankful. And like I said, the support from the community is just been amazing … thank you guys so much.”

Sello’s will also extend its bar hours to midnight on Thursday, Friday and Saturday, and will be open on Mondays starting April 1. A new drink and wine menu also is on the way. Currently, the restaurant’s hours are from 4-9 p.m. Sundays through Thursdays and 4-9:30 p.m. on Fridays and Saturdays.

Partly cloudy. A stray shower or thunderstorm is possible. High 78F. Winds NE at 10 to 15 mph.