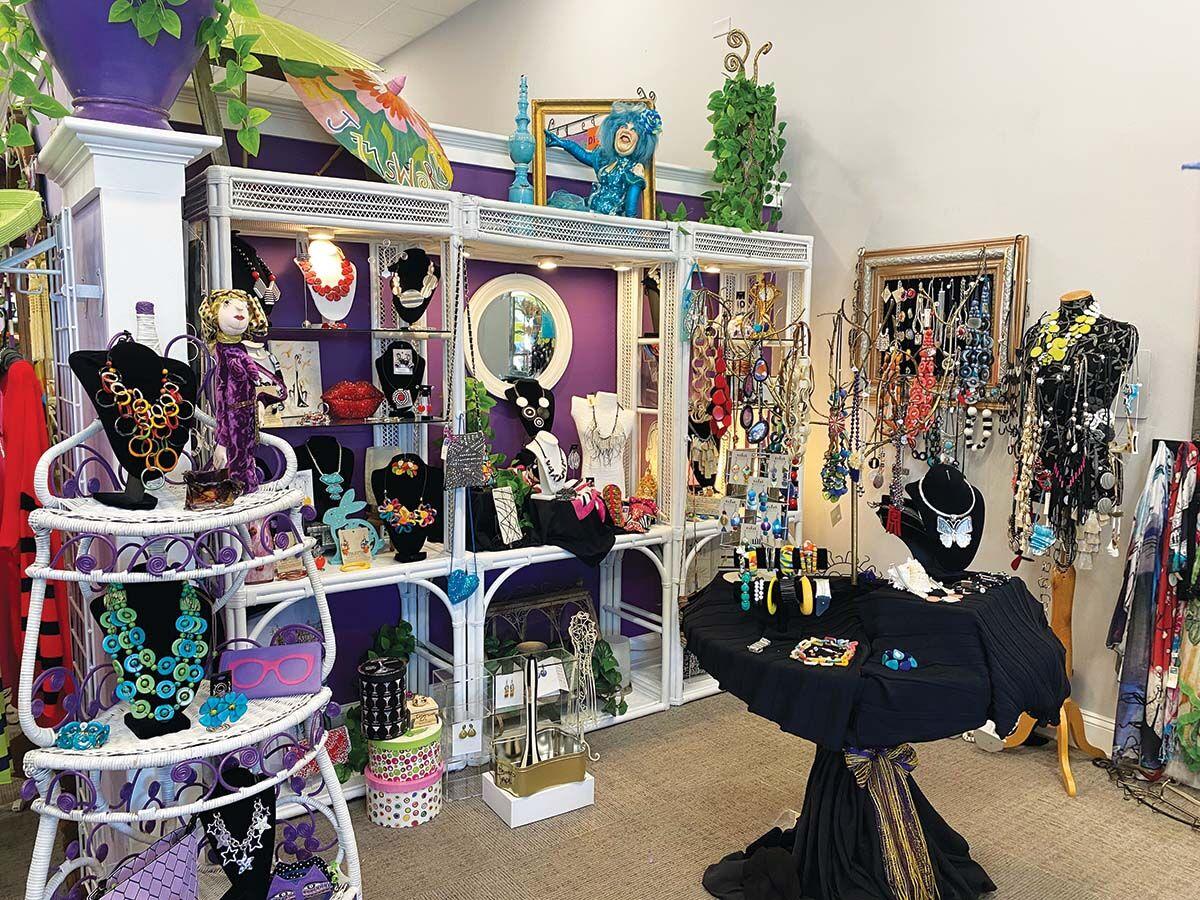 In addition to women’s clothing, CraZy LadyZ! sells a variety of jewelry and accessories. The bou- tique is hosting a week-long celebration to mark its grand reopening at a new location, 12319 Ocean Gateway, in West Ocean City. Events include a carrot hunt and “Sleevy Wonder” Day. 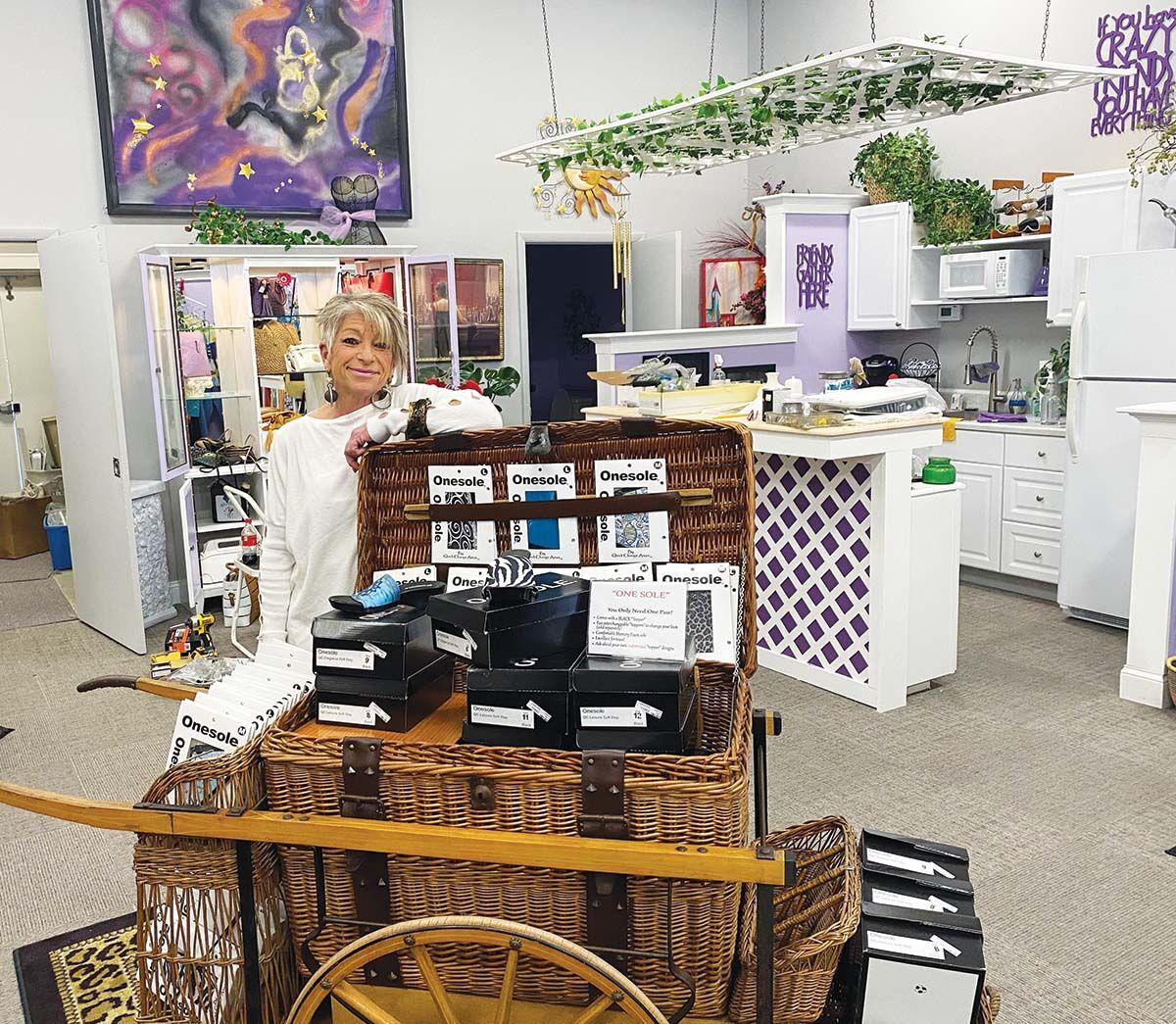 Jan Patterson (pictured) has owned CraZy LadyZ! with Louise Reardon since 2005. What was once a tiny boutique with one location in Chincoteague, Virginia, is now a company with storefronts in West Ocean City and Ocean View, Delaware.

Sixteen years, one expansion and two moves later, the women’s clothing boutique kicked off a week-long celebration yesterday for the grand reopening of its West Ocean City boutique – about one mile east of the old location in the Ocean Gateway Center.

“I’ve always wanted to be in this (retail) space, and it’s all about timing,” said co-owner Jan Patterson. “And the timing was just perfect.”

The new boutique is around 2,400 square feet, Patterson said, an upgrade of only a couple hundred square feet from the old boutique, which closed in November.

But the value is in the location itself, said co-owner Louise Reardon.

Instead of being tucked away behind a Sherwin Williams paint store at its old location, CraZy LadyZ! is only a couple hundred feet off the westbound stretch of Ocean Gateway, easily visible to passersby.

The celebration features events such as an Easter carrot hunt, where patrons can hunt around the boutique for hollow, plastic carrots that contain discounts and gifts, and “Stevie Wonder & Sleevey Wonder” Day, which will showcase attire from the brand of the same name.

Patterson and Reardon have owned CraZy LadyZ! since 2005, but their relationship goes back 35 years to when Patterson was a job recruiter and Reardon was the vice president of a software company that employed Patterson’s services.

Eventually, Reardon left her job to partner up with Patterson in her business.

Owning CraZy LadyZ! came down to being in the right place at the right time. Patterson said she had come to enjoy shopping at a boutique called Crazy Lady in Chincoteague, Virginia. In 2005, she and Reardon bought it and changed the name to CraZy LadyZ!

“We thought it would be so much fun to own a store like this,” Reardon said. “It looked like it’d be really cool. We said to the owner one day, ‘If you ever want to sell it (let us know),’ and she called us.”

Patterson added that the boutique was originally just a hobby.

“We had no intentions of leaving corporate America,” Patterson said.

For three years, Patterson and Reardon ran the boutique in addition to their day jobs. But when the Great Recession hit in 2008, the impact on the job recruiting industry was devastating.

“It was a natural transition (to working in the boutique full time),” Patterson said. “We’ve always been very hands-on (with running the boutique) and it was impossible to do retail and recruiting at the same time – just impossible to give each part 100 percent.”

The pair ran CraZy LadyZ! in Chincoteague until 2012 before moving the boutique to Ocean View, Delaware. A couple of years before that they expanded to West Ocean City.

Patterson and Reardon pride themselves on the inclusive environment that they cultivate in their boutique. Their clientele is so loyal and dedicated that they don’t see a need to be located in the more touristy areas of Ocean City, Patterson said.

“We have people who come specifically for us from Philadelphia, New York, Washington, D.C.,” Patterson said. “Our store is not really an ‘Ocean City’ kind of store. We are a resort store offering some really cool, out-of-the-box stuff for the boutique shopper.”

Patterson said she and Reardon are particular about their wares, which she believes is a major selling point to their clientele.

“As a business owner and somebody who is in this community, I care about my customers,” Patterson said. “I can’t sell anything I don’t believe in and don’t like.”

Shirley Moran, who has been patronizing the boutique since its Chincoteague days, concurred.

“The clothes are a very unique and nice quality,” Moran said. “You never see yourself walking down the street. They don’t buy a bunch of tops that look the same. (It seems) they don’t ever keep more than five or six pieces of the same thing in stock

“The people who work there are always so nice and friendly,” Moran continued. “They come right up to you to ask if they can help you but don’t bother you. Sometimes they make helpful suggestions, and you always get a little refreshment if you want it when you go in.”

Patterson and Reardon employ 14 people — 12 of whom are part-time.

Store manager Lorraine Murphy praised the ambiance that the staff has created.

“It’s upbeat, it’s fun,” Murphy said. “The staff and owners, we’re more like a family than we are a working association.”

The week of festivities kicked off Thursday morning with a ribbon-cutting and blessing of the new location. The Easter carrot hunt on Saturday will be run in conjunction with an Easter egg hunt sponsored by Monogram Furniture, the boutique’s next-door neighbor. CraZy LadyZ! will be closed on Easter Sunday.

Thunderstorms in the evening will give way to clear skies overnight. Low 66F. Winds NNW at 5 to 10 mph. Chance of rain 70%.