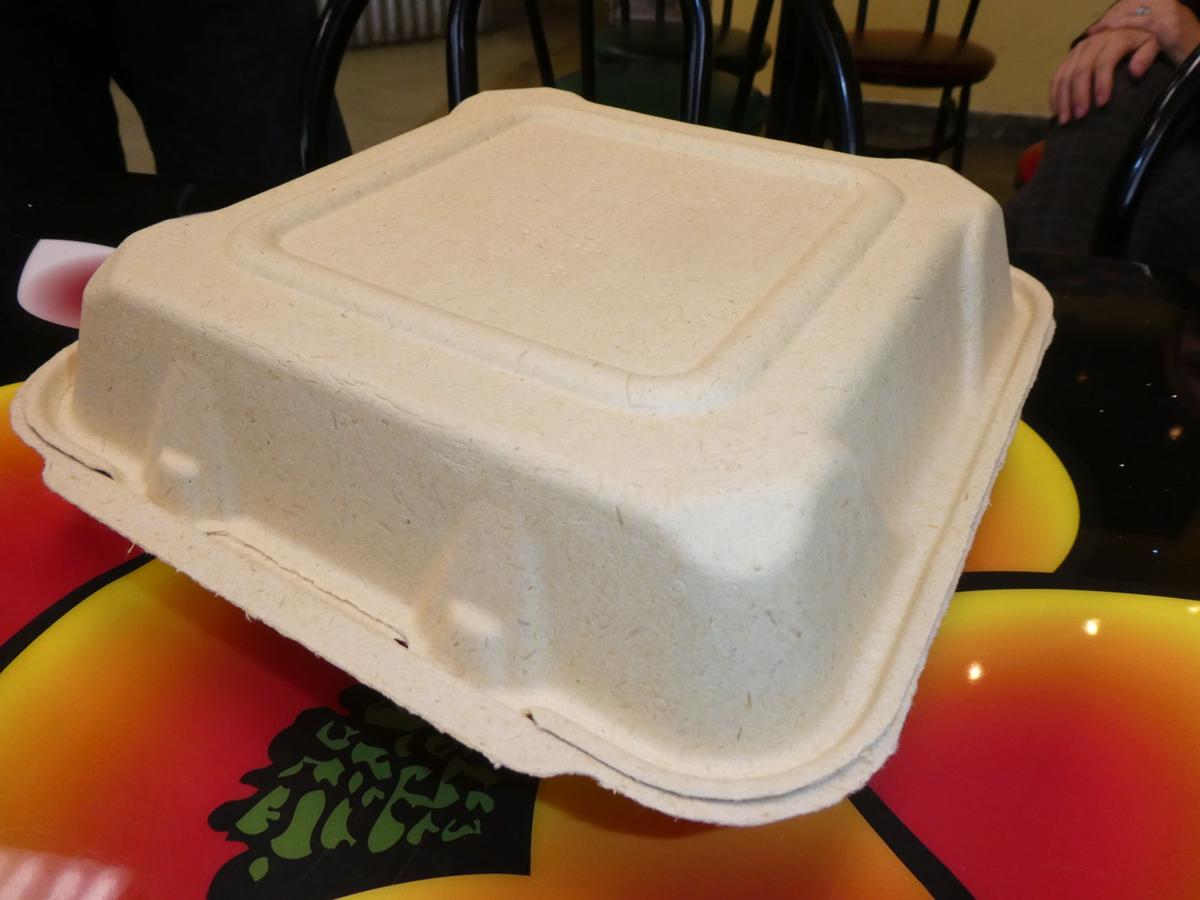 This takeout box, used at Mother’s Cantina restaurant on 28th Street, is made out of sugarcane and is one of the alternatives available to restaurateurs, nonprofits and businesses as they prepare themselves for a statewide Styrofoam ban effective July 1. 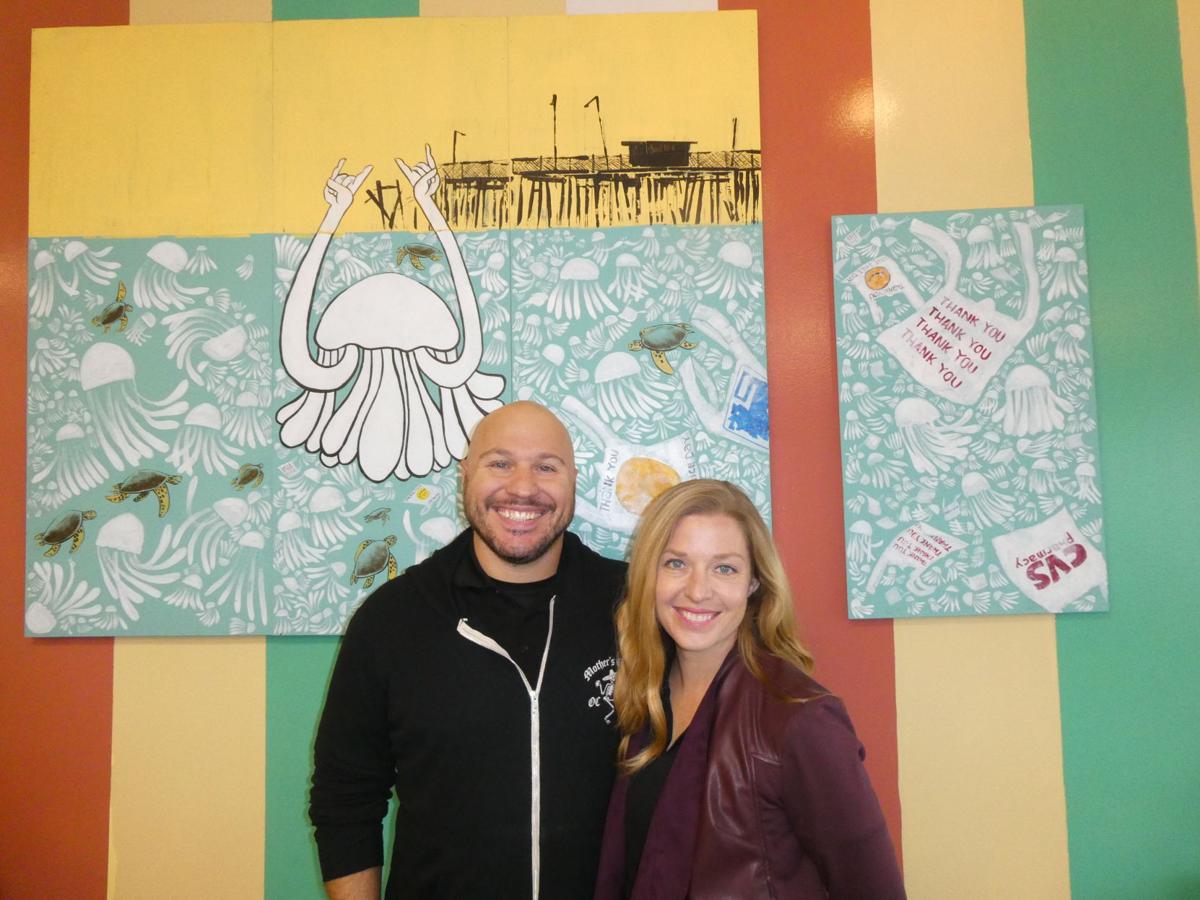 Owners of Mother’s Cantina Restaurant on 28thStreet Ryan and Neely James will assist the city in educating local restaurateurs, nonprofits and businesses that will be affected by Maryland’s statewide ban on Styrofoam, effective July 1. 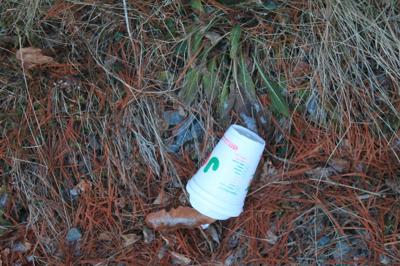 (Jan. 17, 2020) Ocean City must ready itself for a huge change, as the ban on the sale or the distribution of expanded polystyrene, commonly known as styrofoam, food service products in Maryland takes effect on July 1.

As the date quickly approaches, Worcester County Environmental Health Director Edward Potetz paid a visit to the Ocean City Green Team last Wednesday to explain his concerns with the legislation and how the Maryland Department of Health will enforce it.

On April 3, 2019, the Maryland General Assembly gave its final approval to the historic, statewide ban on styrofoam. The move made the state the first in the nation to bar the popular food service products, completely.

While the legislation was a big win for environmentalists, Potetz called the ban a “big blow” to Ocean City’s restaurant industry.

Under the guidelines, expanded polystyrene food service product means a product that is:

• Used for selling or providing food or beverages

This means any food container, plates, hot and cold beverage cups, trays and cartons for eggs and other foods made with styrofoam cannot be sold in the state.

Additionally, while “food service” may lead to the assumption that the ban affects restaurants, bars and grocery stores, the legislation also prevents schools and nonprofits from selling or providing the containers, as well.

The legislation does offer some leeway, as it does not include food or beverages that have been packaged in styrofoam before a food service business receives it and styrofoam containers used to package raw meat, fish, poultry or seafood.

Nonetheless, Potetz said the move would still have negative consequences.

“This is going to create a lot of problems for us,” Potetz said. “One of our concerns is going to be our temporary vendors — how are we going to reach out to those who we don’t even know is coming into the county for these temporary events? They’re going to show up with this stuff, and you know what’s going to happen — they can’t use it.”

If a business or organization is found with styrofoam food service products, it will have three months to get rid of it, or else face a fine of up to $250.

Potetz said, however, the health department’s goal was not to penalize, but rather educate and provide resources to those most likely to be affected.

Furthermore, while the ban includes schools, churches, the fire department, etc., these entities can request a one-year waiver to get rid of their styrofoam food service products.

A larger scale yet-to-be-addressed issue, however, was how the ban could act as a disincentive for major food franchises, such as Chick-fil-A, Potetz said, and cause them to relocate to nearby states like Delaware or Virginia.

While the city may not have every solution ready to go, it is working with local business owners, such as Mother’s Cantina restaurant owners Ryan and Neely James, to hopefully engage and educate as many people in the resort as possible.

“Ryan and I have been prioritizing our efforts to eliminate styrofoam in our [area] restaurants and in our community since eliminating polystyrene containers and plastic from all of our businesses in 2016,” Neely said. “As an active member of the Maryland Green Registry, Ocean City Chamber of Commerce, Ocean City Green Team and the Surfrider Foundation’s first Ocean Friendly Restaurant, we feel it’s our responsibility to inform local hospitality industry professionals regarding how to make the switch.”

James said she and her husband would work with city leaders to hold information sessions to highlight important product vendors, best practices and product cost management.

They have cut out 99.9 percent of single-use plastic from their business and no longer use Styrofoam takeout containers.

The only single-use plastic items they still use are trash bags, but they are hoping to find a suitable alternative in the near future.

Cloudy and damp with rain early...then becoming partly cloudy. Low 43F. Winds SW at 10 to 20 mph. Chance of rain 100%. Rainfall around a quarter of an inch.

Sunshine along with some cloudy intervals. Morning high of 47F with temps falling to near 35. Winds NW at 15 to 25 mph. Higher wind gusts possible.