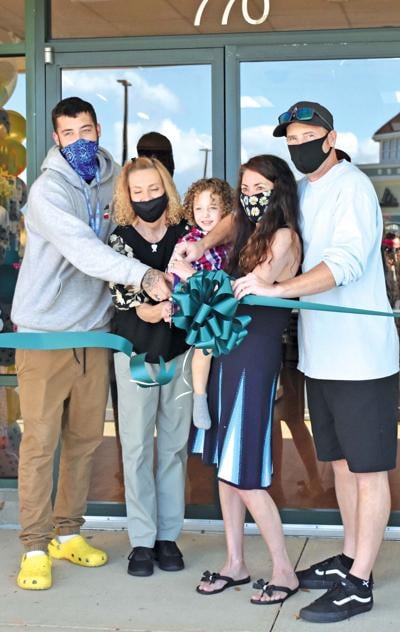 On Tuesday, a ribbon-cutting ceremony was held at the store, which is located in the Outlets Ocean City.

Delmar Smith said the new location is comparable to the Doggie Style Canine Café the couple opened in 2005 in the Inlet Village on the southern edge of the Ocean City Boardwalk.

“It’s a doggie style canine café just like this,” he said.

The longtime small business operators have charted continued growth over the last decade and a half after opening Treasure Island in 2009 and OC Socks last year in the Inlet Village.

“Before that we had a store in Solomon’s Island for about 12 years,” he said.

Prior to 2005, the couple ran Bears by the Bay in Calvert County, but after Delmar retired from the Maryland State Police the pair settled in West Ocean City.

Frequent patrons of the Inlet Village’s Canine Café will find some familiar faces at the new spot at the Outlets Ocean City.

In addition to English bulldog ambassador, Kermit Z Dog, the location is being managed by longtime cohort, Linda Cline.

Since unlocking the doors at the dog boutique last Saturday, community response has been overwhelming.

“So far it’s been a good experience and we’re excited,” he said. “West Ocean City is definitely growing.”

In fact, 2020 has witnessed the Smith’s retail footprint swell northward after opening Sock Avenue in Rehoboth Beach earlier this year.

“That’s actually a dog boutique and sock store,” he said. “It’s the largest sock store in the world that we know of.”

The Delaware-based store, which echoes the success of OC Socks, is stocked with roughly 2,000 styles of foot coverings.

“That was a huge success this year even through covid,” he said.

“The weather for the last two months has been great,” he said. “It’s like an extended season.”

“This store is like our store in Rehoboth Beach [and] has a combination of our best-selling socks,” he said.

The ongoing pandemic also helped spur the Smiths to launch their fifth storefront.

“Another reason we opened this store is for income in the offseason,” he said.

In past years, the Smiths spent a large part of winter vending at holiday craft shows, which have largely been canceled due to pandemic health restrictions.

“We go to the [Kennedy Kreiger] Festival of Trees in Timonium and we do a big Christmas show in Harrisburg, Pennsylvania,” he said.

With typical cold weather routines altered, the savvy retailers rewrote the script for 2020.

“This is a good opportunity to make money where we couldn’t normally,” he said.

To that end, Smith said the trio of stores in the Inlet Village would be open daily through Christmas.

“After that they’ll be open weekends weather permitting,” he said. “If it’s 15 degrees and wind blowing, we’re not opening.”

Both the Doggie Style Dog Boutique & Bakery in West Ocean City and Doggie Style Canine Café in Ocean City are open Monday through Thursday from 10 a.m. to 8 p.m. and Friday through Sunday from 9 a.m. to 9 p.m. For more information, call 443-624-0564 or email doggiestyleinoc@yahoo.com.

Windy with showers and thunderstorms this morning. Then becoming sunny during the afternoon hours. Morning high of 59F with temps falling to near 45. Winds WNW at 20 to 30 mph. Chance of rain 90%. Higher wind gusts possible.