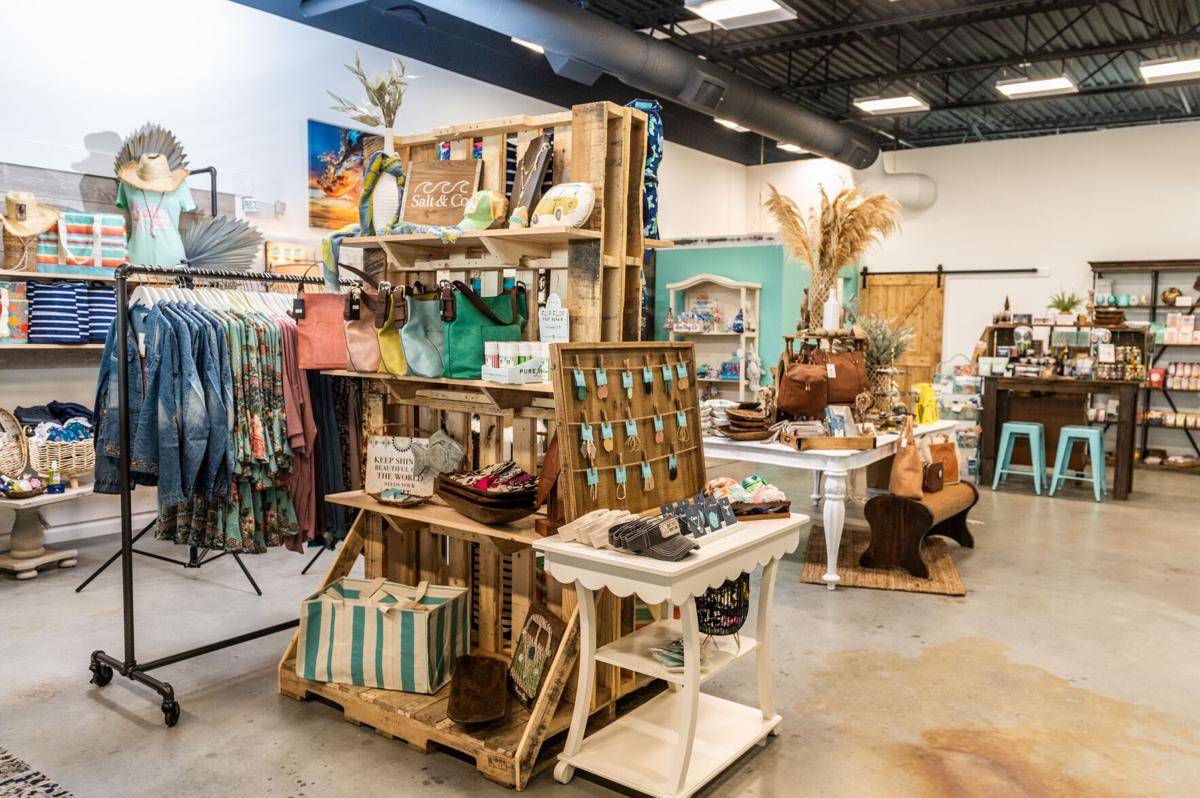 Salt and Co specializes women’s fashion, handcrafted items, glassware with uplifting messages, custom-made Ocean City hats and more. The boutique store in West Ocean City opened in May and will have a ribbon-cutting ceremony to celebrate their joining the Greater Ocean City Chamber of Commerce, today, Friday at 10:30 a.m. 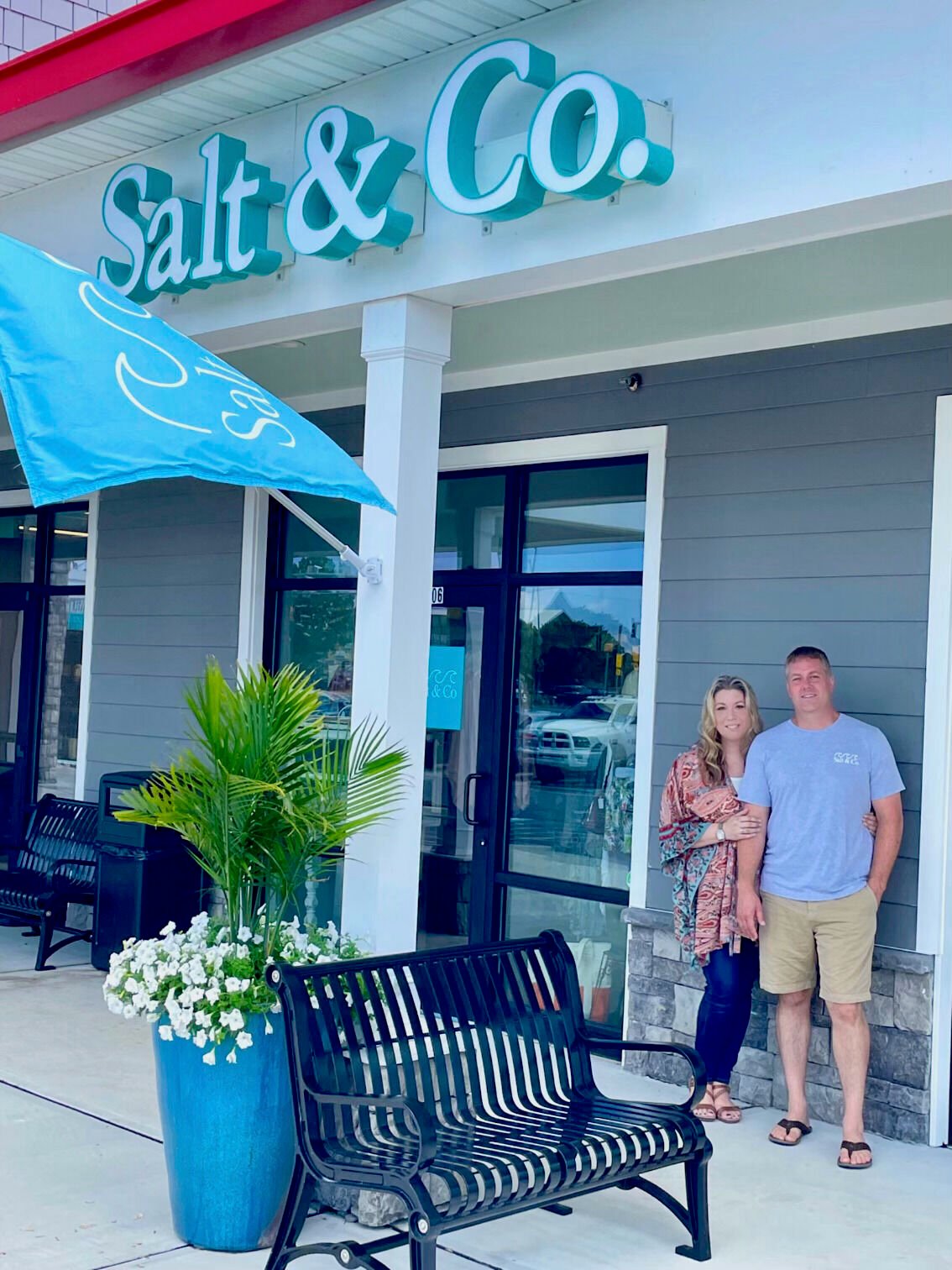 Christopher and Amie McCaslin and their two daughters are finding a new beginning on the coast after two fatal floods wiped out their Ellicott City business in 2016 and 2018. Their move to Ocean City has been vital in the healing they’ve needed, the family said.

When Salt & Co owners Christopher and Amie McCaslin expanded their boutique business to Ellicott City in 2015, they were excited to join one of the longest-standing, picturesque small-business communities in the state.

Then, in 2016, a devastating flash flood sacked the Main Street business area in the Howard County community, killing two people and destroying nearly 200 businesses and homes. It took out the McCaslins’ business, too.

“They kept saying it’s a once in a thousand-year storm and that’s really truly what we were believing too,” said Amie McCaslin. “The chances of this happening again in our lifetime, we thought it was pretty rare. We were told we’d never see it again and we even told our kids that. Our oldest daughter went through a lot of emotions seeing it … But the community rallied behind all the businesses. We felt so much support from everyone and we felt like we wanted to give it one more try.”

They got back on their feet — no easy task since nothing had been covered by insurance. They moved to what they felt to be a safer location on top of the Main Street hill and, in 2018, they reopened their doors.

Then it happened again.

The 2018 flash flood again wiped out many businesses, including theirs, again. That flood killed one person.

After experiencing the second “once in a thousand-year storm” in less than two years, the McCaslins regrouped and decided to move to Ocean City. It made sense, especially with the family’s historical ties to the resort, Christopher McCaslin said.

In May, they opened Salt & Co in West Ocean City.

“We love Ocean City,” he said. “As a baby, I was here. My grandparents bought a bayside place on 52nd Street in the ’50s, so I kind of grew up here in the summer. My brother and I used to spend our summers here. We’d have a little boat, we’d do a little fishing, go to the beach, get Dumser’s ice cream. Big crowds at night — we had a great childhood. This is like a second home to me. Living and working here has been awesome. It’s a hidden gem to me. I don’t know why anyone wouldn’t want to live here.”

They changed the business’s name, too. A La Mode Boutique in Ellicott City became Salt & Co in West Ocean City. Their 14-year-old daughter, Ashley, designed a new logo and, according to her mother, was the brainchild behind the whole rebranding.

“So many people come to the beach for healing or as a way to escape and salt’s an essential ingredient to healing,” Amie McCaslin said. “It’s relatable for a lot of people, not just what we’ve been through.”

The McCaslins have another daughter too — 9-year-old Cailin.

Indeed, the healing that the family has needed shows through in the store’s ambiance and selection — women’s fashion, handcrafted items, glassware with uplifting messages, custom-made Ocean City hats and more. They also sell bracelets whose profits go to the local chapter of the humane society.

“We don’t just want to be a business,” Amie McCaslin said. “We want to be involved in the community.”

And they’re certainly finding ways. Christopher works with a local backpack ministry and they’ve found an “amazing” church, Amie McCaslin said. There will be a ribbon-cutting and giveaways to celebrate their joining the Greater Ocean City Chamber of Commerce, today, Friday at 10:30 a.m.

The store’s hours are fluid, but right now they’re open 10 a.m. to 6 p.m., seven days a week. While it’s a ways off to make a final decision, the McCaslins aspire to keep the store open year-round.

“That’s one of the reasons we wanted to open on this side of town since that’s where most of the locals live,” Christopher McCaslin said. “We’re trying to make this a destination that resonates with the locals.”

After all the devastation it took the family to get to where they are, Amie McCaslin said now, they feel like they’re in the right place — physically and emotionally.

“Going through two (fatal) floods and everything was traumatic to us, our family, our town, but now we’re able to say we’re on the other side and we feel like that was part of the plan,” McCaslin said. “Otherwise we would have never moved here full-time. We feel like we’re home and this is where we were supposed to be. That journey that we’re all on, sometimes you can have those peaks and valleys and we’re so happy that we can say that we’re where we’re supposed to be.”

“We finally feel like everything is falling in place.”

This story appears in the print version of Ocean City Today on July 16, 2021.