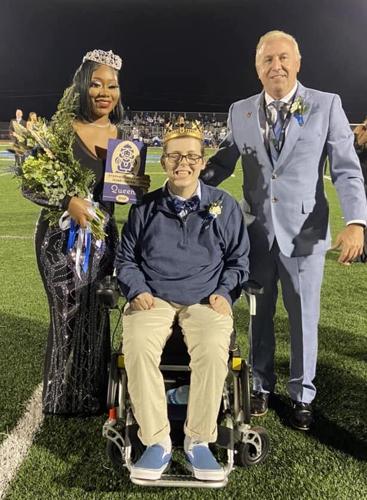 Joshua Alton, 17, who was diagnosed with Stage IV Metastatic Ewing Sarcoma in July 2021, was named Stephen Decatur High School’s Homecoming King. He is pictured with Queen Daniya Smith and Principal Tom Sites during halftime of Decatur’s homecoming game against the North Caroline Bulldogs on Oct. 7. 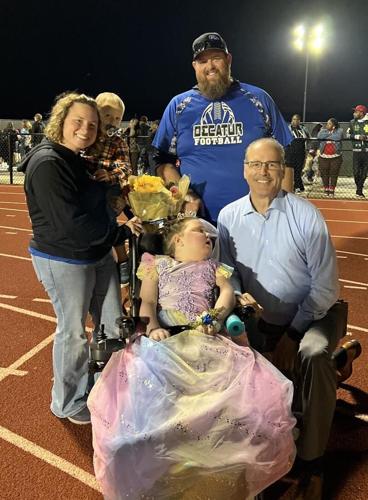 Joshua Alton, 17, who was diagnosed with Stage IV Metastatic Ewing Sarcoma in July 2021, was named Stephen Decatur High School’s Homecoming King. He is pictured with Queen Daniya Smith and Principal Tom Sites during halftime of Decatur’s homecoming game against the North Caroline Bulldogs on Oct. 7.

Alton, 17, who was diagnosed with Stage IV Metastatic Ewing Sarcoma in July 2021, beamed as he sat in his wheelchair on the football field the evening of Oct. 7, flanked by Decatur Principal Tom Sites and Superintendent Lou Taylor.

Dressed in tan slacks, a blue shirt and bowtie – his father taught him how to tie it – Alton listened as shouts of happiness rose from the crowd after the announcer said, “Your 2022 Stephen Decatur High School homecoming king is Josh Alton” during halftime of Decatur’s homecoming game against the North Caroline Bulldogs.

The same evening, 5-year-old Lakelyn Draheim, who is battling a highly aggressive brain tumor, was designated Homecoming Princess. Her older brother is a member of the Decatur football team.

“The kids voted for Joshua. After they announced he was Homecoming King, the entire student body started chanting his name,” Taylor said. “It was very heartwarming, just a good feeling. It just shows the quality of our student body at Stephen Decatur High School and their priority in making choices.

“Josh deserves that, and it gives me hope that this generation is making good decisions. To see the gleam in his eye and the smile,” Taylor added.

At first, Alton wasn’t too sure about being nominated. He had been out of school so long he thought his classmates wouldn’t remember him, his mother, Tara Alton, said.

“When they announced his name to introduce the court, the entire senior class stood up. That moment was so special. The smile on his face was priceless,” she said.

“Then when they called his name, I’m not sure he knew whether to smile or cry. You could tell that he truly felt loved and encouraged by his classmates. The Class of 2023 really came through for him,” she said.

In recent days, Alton has been feeling tired and has some pain but he seems to be a little stronger, his mother said.

In the past eight weeks, the cancer has spread aggressively, so he won’t be receiving any more treatments.

“We are focusing on quality of life and making his next several weeks or months as special and life-giving as possible. We continue to hope and pray for a miracle and that God will heal his body,” Tara Alton said.

In a recent Facebook post, Mrs. Alton wrote, “Medicine says he doesn’t have much longer, but Jesus is much stronger. We are still going to keep praying for a miracle … I pray for that every day, every hour.”

She added a photograph of her son as a boy, carefree and running over piles of leaves with his older sister on a fall day, his jacket open.

More than 160 comments promised prayer and support for the young man who, in August, celebrated an early Christmas with dozens of friends and neighbors at their Ocean Pines home.

Santa Claus arrived, riding in an Ocean Pines fire engine and Alton had the magical look of Christmas in his eyes as he watched the jolly elf get out of the truck, carrying a stack of neatly wrapped presents, and walk toward him as friends and family, gathered around, clapping.

In the front yard of the Alton home stood a giant inflatable snowman. Christmas carols played. A tub of freshly baked cookies was passed around, flavorful snowballs were courtesy of The Snowball Stand and wreaths and strings of lights hung on the house. Inside, there was a 9-foot tree.

“This is really fun,” Alton said, telling a guest Christmas is his favorite holiday and explaining during the summer of 2021, he starting having back pain. He was working at Baja Amusements near Ocean City and started losing his balance.

By August, doctors had decided not to continue chemotherapy, his mother said, “as there is nothing more they can do with it.”

“We are planning to live life to the fullest for him and with him. We are heartbroken and crushed, but clinging to the little mustard seed of faith we have that God can heal and is still in the business of performing miracles,” she wrote in a Facebook update.

“Either way, we know God is in this 100 percent and that He holds Joshua ever so close,” she added.