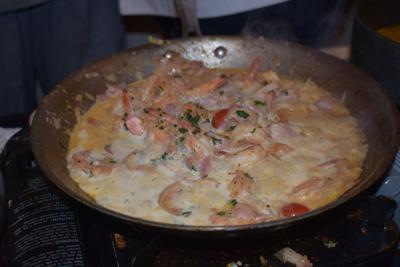 (Feb. 28, 2020) The second annual Art of the pARTy fundraiser was considered a cuisine success after selling out to a crowd of over 100 people and raising over $4,000 for culinary scholarships at the Atlantic Hotel in Berlin on Friday, Feb. 21.

To promote food as a form of art, the Worcester County Arts Council and the Delmarva Chefs and Cooks Association created a scholarship for students of creative cuisine last year, and netted more than $3,800 through their first food sampling party.

“It was a great event,” Phil Cropper, president for the Delmarva Chefs and Cooks Association and culinary instructor at Worcester Technical High School. “We’re just happy to get the community support for the arts and student scholarships.”

The organizations that participated in the event were Centerplate of the convention center on 40th Street, Marlin Moon on 33rd Street, Box Car 40 of Pittsville, Baked Desserts in Berlin, Coastal Coffee Roasting in West Ocean City, Princess Royale on 91st Street, Coastal Cupcake in Berlin, Washington Catering of Snow Hill and the Handy Seafood Company in Salisbury.

“I thought it went well, everyone seemed very positive,” Cropper said. “They liked the addition of the live music this year. I got emails sent to me from people who attended that were just gobsmacked because they didn’t know what to expect and they really loved the event.”

The money raised from last year’s party will be used for scholarships this year, since the inaugural fundraising event took place after the scholarship deadline. Additional money raised this year could be used to help members of the chefs’ association continue their education by sending them to conferences and conventions.

Cropper hopes to continue using the Atlantic Hotel to host the event for years to come.

“We would like to keep it at the Atlantic Hotel because we like the vibe and we like the small community and the ambiance that the hotel offers,” Cropper said. “It’s going be based on whether we keep the event at 100 or we try to elevate the event to make it more attended. As a committee we’re happy with the current venue and with having 100 people.”

Students can apply for the culinary scholarship before April 15 at the Worcester County Arts Council website at www.worcestercountyartscouncil.org /index.php/site/grants_scholarships/ or the Delmarva Chefs and Cooks Association website at www.delmarvachefs.com.