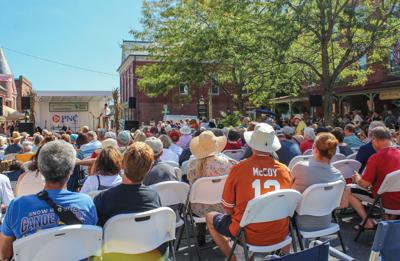 (Sept. 24, 2021) After taking a pause in 2020, the annual Fiddler’s Convention returns to downtown Berlin this Friday through Sunday.

Berlin Chamber of Commerce Deputy Director Steve Frene said the 29th year of the musical extravaganza will see a few tweaks to the kids and adults’ competition on Saturday.

“It’s one of Berlin’s biggest festivals [and] the only one that goes for three days,” he said. “In past years, we’ve actually had the competition live on Saturday.”

Frene said the approach was altered this year with youth and adult competition winners performing and receiving awards on Saturday from 11 a.m. to 2 p.m.

“What we did is we had musicians submit videos,” he said. “We looked at about 15 entries.”

After shutting down the event in 2020 because of the pandemic, Frene said the layoff helped spur many pickers to upload content online.

“It’s really the Saturday part that’s going to be just a little bit different,” he said.

In past years, youth and adult performers would convene for an extended competition on Saturday with winners selected that afternoon.

“They’d have to come up on stage and play live and be judged,” he said.

With upwards of 30 players in peak years, the number has dropped as low as 10 more recently.

“We’ve noticed a dwindling of competitors over the years,” he said.

“The winners had to be able to come to Berlin to perform,” he said. “Everybody said ‘yes.’”

Besides catching video competition winners, fans on Saturday will also be treated to some amazing child performers

“The things that they love is to see the kids play music,” he said. “We have a couple of children performers that have been selected to be honorable mentions who have agreed to come and perform.”

Headlining acts run all three days of the Fiddler’s Convention, starting with the Gina Furtado Project on Friday from 7-10 p.m.

“She is actually a former competitor at the Fiddler’s Convention from many years ago,” he said.

Furtado has been nominated three times as banjo player of the year by the International Bluegrass Music Association.

Saturday’s line-up opens with a live set by the U.S. Navy Band Country Current at 2 p.m.

“They have a Bluegrass unit,” he said.

In addition to hitting the stage at numerous bluegrass festivals throughout the U.S. since its inception in 1973, in 2011 Country Current was the first military band to appear at the South by Southwest music festival in Austin, Texas.

In the same vein as Friday’s headliner, Country Current member Patrick McAvinue also competed in the Berlin Fiddler’s Convention as a youth.

“It’s a nice story that two former child competitors actually came back to be paid performers,” he said. “It brings it full circle.”

“We’re trying to reinforce children and they’re playing of this music,” he said.

“Sunday is what we call the ‘Bluegrass and Gospel Jamboree,’ that is hosted by my band, Stevenson’s Crossroads,” he said.

“Gospel music always has played a big part in bluegrass,” he said. “That’s kind of a way of paying homage to the great giver of talent.”

Unlike past events when Sunday’s acts played on the Taylor House Museum lawn, the gospel-themed set will take place on the Main Street stage.

Frene said the main stage would be set on the north end of Main Street by the Sterling Tavern on Friday and Sunday, while on Saturday acts will perform on the south end by the Atlantic Hotel.

Frene said ample parking options are available including a free shuttle on Saturday.

“We’re going to have a shuttle on Saturday from 11 a.m. to 6 p.m. from Berlin Intermediate School,” he said.

In addition to town parking lots, both the Berlin Fire Company and Buckingham Presbyterian Church will have parking available for a donation.

Berlin's Fiddlers Convention is back for its 30th year. Festivities kick off Friday night with competitions, entertainment, vendors and more throughout the weekend.