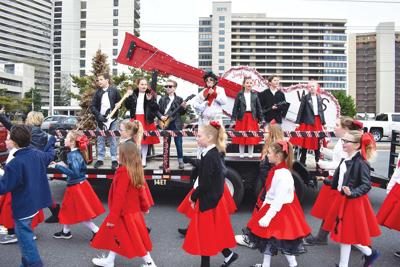 Coastal Highway between Old Landing Road and 120th Street, southbound, will be closed from 8 a.m. to 1 p.m. for the parade.

“There’s definitely good growth this year on the event, which means the event will be a little bit longer duration, but it also means that people will have a larger variety of items to enjoy as spectators,” Frank Miller, special events director for the Town of Ocean City, said. “

Originally created and run by the Gold Coast Mall Merchants Association, on 115th Street, for over 30 years, the Town of Ocean City has been coordinating the annual Christmas parade for the last five years.

“It’s a great kickoff for the holiday season and the whole community comes out,” Special Events Coordinator Brenda Moore said. “It’s a lot of fun.”

More than 8,000 people were estimated to have watched the parade last year, which was attributed to nice weather, Moore said.

Many local businesses and nonprofits will join Trimper’s Rides and Harrison Group’s commercial floats, which have participated since the parade’s inception, including the Carousel, i.g. Burton, and the OC Stars from Ocean City Elementary.

Trophies will be awarded at the Carousel Hotel on 118th Street following the parade for first, second and third place in each category.

In addition, two special trophies will be presented. The Coca-Cola Award will go to the parade entry who displays the most energy and fun. The Carousel Group will present an award to the best Ocean City vacation-themed unit.

“There are lots of new entries this year,” Moore said. “That’s probably the most exciting thing for us is [that] it’s building. People want to be in this parade. It’s exciting to see the energy coming in. We won’t know until the day of the parade the creativity they’ll bring, but it’s looking like a lot more floats.”

“This is the epitome, for the town, in terms of family friendly fun,” Miller said.

ABC 47 television anchor Brooke Butler and Steve Webster, the vice president of flight operations for the Ocean City Air Show, will share the master of ceremony duties and provide a play-by-play of the parade for spectators.

The event will last approximately two hours and seating will be located in the Food Lion parking lot on 118th Street for spectators along with the judges’ stand.

Hundreds of people participate in the parade annually and thousands of spectators are expected to line up along Coastal Highway to watch the procession, Miller said.

Santa, one of his elves and Mrs. Claus will conclude the parade in a sleigh sponsored by Jolly Roger Amusements. Santa, Mrs. Claus and their elves can also be seen at the Winterfest of Lights at Northside Park on 125th Street, until Christmas Eve.

Traffic patterns will change beginning around 8 a.m. on Saturday. Spectators will not be permitted to watch the parade from the median area of Coastal Highway.

“This parade for many years shuts down the southbound side of Coastal Highway,” Miller said. “We still allow southbound traffic, but it’s condensed all over to the eastern lanes of Coastal Highway which means if you’re traveling through Ocean City just expect it may take a little longer to get from north to south and south to north. You’ll have to plan for extra time.”

Due to the high volume of pedestrian traffic, everyone is reminded to use crosswalks and cross with the traffic signal.

There is no fee to participate in the parade. To register, contact the Ocean City Special Events Department at 410-250-0125.

A few snow showers scattered about the area this evening, otherwise a good deal of clouds. Low 26F. Winds NNE at 15 to 25 mph. Chance of snow 30%. Higher wind gusts possible.