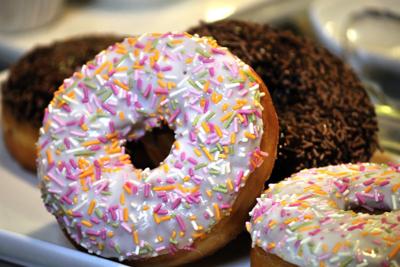 (Jan. 31, 2020) The First Presbyterian Church will host its fourth Grace Parker all-you-can-eat breakfast of the winter season, Wednesday, Feb. 5, from 7 a.m. to noon.

“It was originally started by the women of the church to raise funds,” said Head Chef Chris Greenwood, who also organizes the event. “We moved the church from downtown Ocean City to its current location on 13th Street, and the ladies wanted to have a kitchen put in and they had to raise money to purchase the equipment.”

The breakfasts take place the first Wednesday of the month from November to March. The last Grace Parker Breakfast will be held on Wednesday, March 4.

The preparation for breakfast starts the day before, Greenwood said. Volunteers, most of them known as “Woman of Worship,” will come in to set up the tables and decorate the room. Preparation of the buckwheat, ham and sausage will also get started.

On the morning of Feb. 5, volunteers will begin arriving at 4:30 a.m. to start cooking. Later, the servers will arrive up until 7 a.m. The big rush starts about an hour later and lasts until 10 a.m.

“If there’s any political happening [or] elections, politicians will come to be seen,” Greenwood said. “We get a lot of Ocean City workers who make it their monthly tradition to come and be with us on that Wednesday morning and it’s a good time for all.”

About 25 volunteers help make the tradition a success every month. The first breakfasts were held more than 60 years ago, however, no one is sure of the date.

Although the exact year could not be determined, the breakfasts started sometime between 1955 and 1960, when construction began on the new church.

In 1955, the congregation bought four lots at 13th Street and Philadelphia Avenue.

In 1962, the First Presbyterian Church moved from North Division and Baltimore Ave. to 13th Street on North Philadelphia Ave. and its previous location was sold to the Baptist Church.

To raise money for a new kitchen in the First Presbyterian Church’s current location, Grace Parker, a cook and head of the kitchen at the church, decided to start cooking breakfasts. She made her own jellies and biscuits, Greenwood said.

“We use this fundraiser for the church to build community within the church, so people come together and it’s a day of fellowship for us as well as for the community,” Greenwood said.

The proceeds go toward projects, missions, scholarships and other special needs of the church such as new tables. Since he started working with the fundraiser, Greenwood estimated the church has raised over $100,000, though he does not know how much was raised since its inception.

After Parker died, in 1986 her daughter, Lorraine Rose, took over the reins. Greenwood has been the head chef since 2000, when Rose’s health started to decline. He promised the ladies of the church if they wanted to continue the breakfast tradition, he would take over cooking and ordering duties.

Intervals of clouds and sunshine in the morning with more clouds for later in the day. High 57F. Winds SSE at 5 to 10 mph.