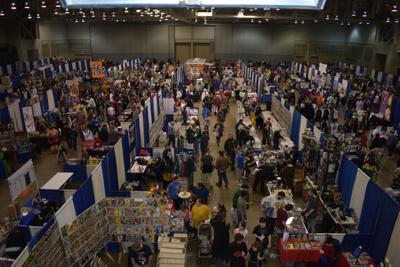 In addition, nearly 1,000 pounds of food was collected for Diakonia, a nonprofit organization, which provides emergency housing, food services, counseling and other assistance to its guests.

According to organizer James Dufendach, so many people visited the Ocean City convention center for Comic Con, which included cosplay, workshops, comic books, anime and costume contests, that he almost ran out of wristbands and thought he would need to use his backup supply.

“There’s a ceiling on the show and I think we’re probably real close to it,” he said. “Well … I keep saying that. I keep saying and it keeps getting bigger than I had anticipated. But … I feel good about it.”

The inaugural event was held at the Grand Hotel and Spa on 21st Street. About 2,500 people attended.

More than double the amount of food was donated to Diakonia this year, compared to 2018 when around 450 pounds was collected.

Dufendach was also impressed with his staff for being able to tackle the extremely long lines, which despite its size, never exceeded a wait of more than 15 minutes to enter the convention.

“This was wonderful,” Deptford, New Jersey resident Jason Hettel, who dressed as Steampunk Batman, said. “Last year was fabulous ... it really, really was a bang-up event, but [this year] outdid itself. It was a wonderful event, with gracious people and having such a good time I enjoyed every minute of it.”

Others commented on how professional the convention was this year.

“I’ve been coming here since it first started,” Salisbury resident Jae Johnson said. “This is the most successful con they’ve had in a while. There was a lot of people here. I will be coming back, and honestly, I’m glad to see how far they’ve come.

“This year was a little hectic, but it was a very good thing to see,” she continued. “There were so many people together and not too many problems. I thoroughly enjoyed this year. I think it had that strong, sturdy sense of, ‘We know what we’re doing.’”

“A lot of people ask for that, and then I have a lot of people who go, ‘I love that it’s a one-day thing,’” he said. “There’s pros and cons to both sides and there’s no right answer. What I want to do is not a two-day show.”

Despite this, Dufendach is looking forward to next year’s Comic Con, and making it even better than this one.

“We learn every year. In those three years we’ve learn so much,” he said. “I spoke with the other collaborators and we went over what could run faster or better next year.”

Overall, Dufendach considered the event a huge success due in part to his staff and the vendors who attended.

“The only thing I want to say is thank you, everyone, for all your support,” he said. “Please continue to support us. We [greatly] appreciate it. We’ll see everybody in 2020.”

Windy with a few clouds from time to time. High 53F. Winds WNW at 20 to 30 mph. Higher wind gusts possible.