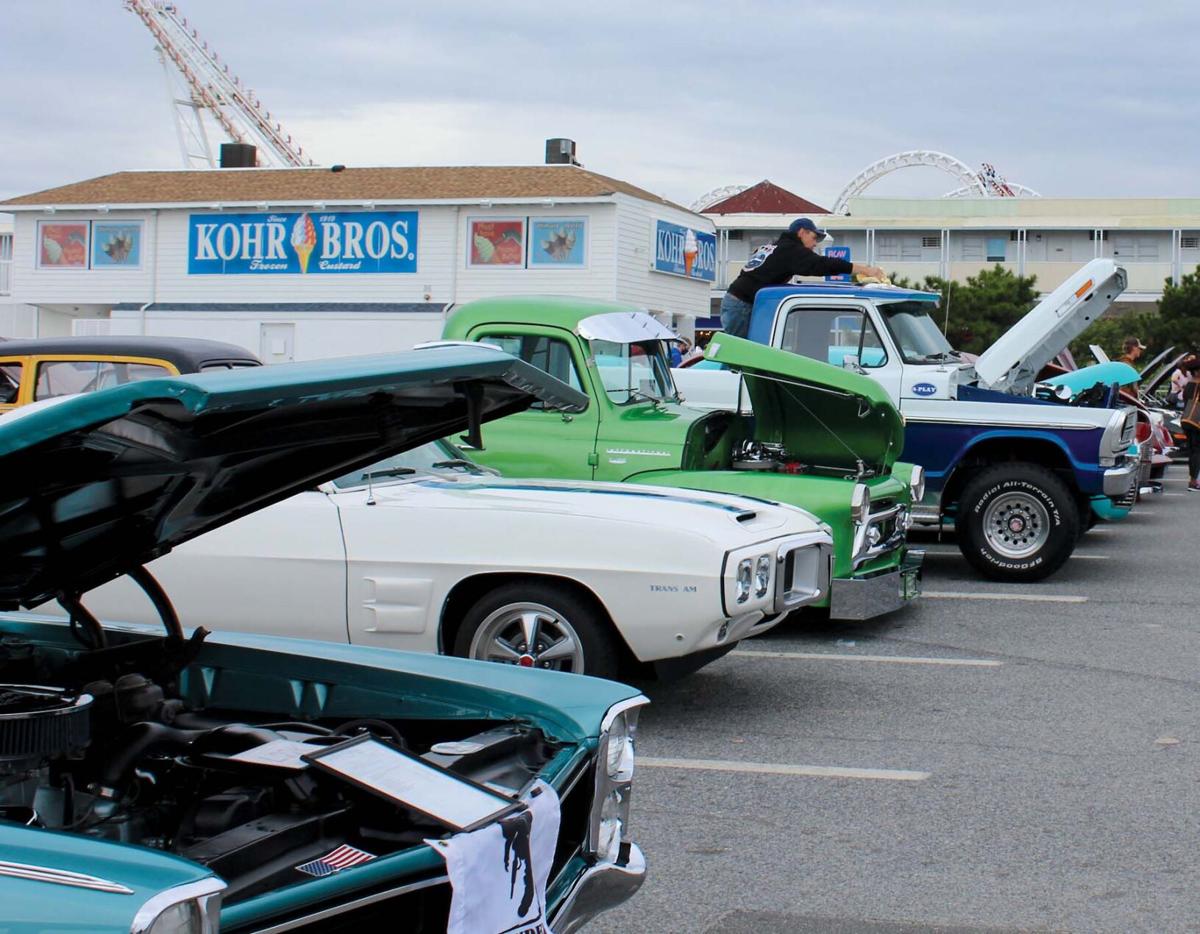 More than 3,000 hotrods, muscle cars, classics, and street machines dating back to 1979 and earlier will flock to Ocean City this weekend for the 30th Annual Cruisin’ Ocean City event. 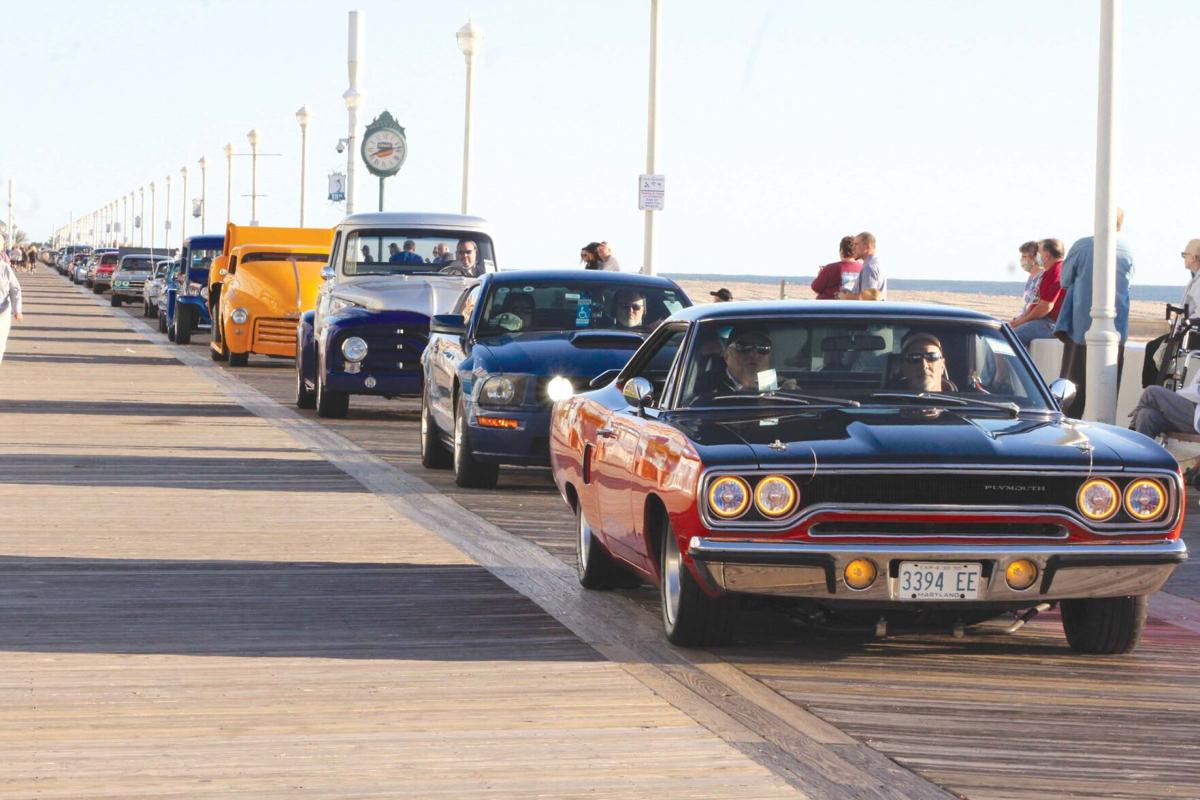 The 30th Annual Cruisin’ Ocean City car event will feature morning Boardwalk parades from Thursday to Saturday, beginning at 8 a.m. at 27th Street, that lead to south to the inlet.

More than 3,000 hotrods, muscle cars, classics, and street machines dating back to 1979 and earlier will flock to Ocean City this weekend for the 30th Annual Cruisin’ Ocean City event.

The 30th Annual Cruisin’ Ocean City car event will feature morning Boardwalk parades from Thursday to Saturday, beginning at 8 a.m. at 27th Street, that lead to south to the inlet.

(May 21, 2021) The deep humming of engines followed by loud roaring bursts caused by the internal combustion of fuel being pumped through gas lines with the press of a pedal will be the norm this weekend, as more than 3,000 muscle cars, classics, street machines and hotrods flock to the resort area for the 30th annual Cruisin’ Ocean City event.

This year, organizers Meredith Herbert, Jacklyn Lehr and Bob Rothermel plan to give attendees what they said is one of the hottest hot rod shows on the East Coast, with activities taking place all over Worcester and Wicomico counties, and in Ocean City in spots such as the inlet parking lot and Ocean City convention center.

“We’re just really excited to be celebrating 30 years,” Herbert said on Wednesday. “After the year we had, we are extremely excited to gather in Ocean City to enjoy a fun, family-friendly event.”

One of the features of this year’s event is a ride on Saturday that will take participants on a tripe between Ocean City, Snow Hill, Pocomoke City, and Salisbury, where they will finish the day with a Delmarva Shorebirds baseball game.

In addition to the baseball game, special guests like Larry Wilcox, who played Officer John Baker in the television show “CHiPs,” and David Newbern and Mike Cotton from “Faster with Finnegan” will be at the car show this year.

Organizers said products from Advance Auto Parts, AMSOIL, Advantage Lifts, Barrett-Jackson Auctions, TREMEC Transmissions and more will be showcased at the inlet parking lot for the duration of the event, which runs from Thursday, May 20 through Sunday, May 23.

Vendors will also be set up at the Ocean City convention center, both inside and outside, selling specialty items, arts and crafts, jewelry, and T-shirts. Also happening inside the convention center will be the Car Corral and Swap Meet, on Thursday, Friday, and Saturday.

The event features morning Boardwalk parades from Thursday to Saturday, starting at 8 a.m. at 27th Street and heading south to the inlet.

To cap things off, the “Grand Finale” awards, starting at 2 p.m. on Sunday and consisting of more than 500 trophies, plaques and awards will be handed out at the inlet lot, along with over 3,000 giveaways.

While Cruisin’ participants know not to showboat on local roads and highways, non-participants who come to town during the event don’t always abide by the rules. To keep a lid on that behavior, city officials imposed a “Special Event Zone” designation on Coastal Highway and its connecting roads on Tuesday, and it will remain in effect until Monday. While the zone is in place, a stronger-than-normal police presence consisting of the Ocean City Police Department and other area law enforcement agencies will be on patrol.

Inside the Special Event Zone, established speed limits are reduced and fines will be increased for violations – like construction zones.

Police urged spectators to not incite “burn-outs” by motorists and to keep sidewalks clear for pedestrians. Those who incite such activities will be charged along with the driver who performs the burn-out.

“Crusin’ Ocean City has always held safety as our number one priority,” event organizers said in a press release. “The event does not tolerate unlawful activities or the disrespect of Ocean City.

“We encourage everyone [who] comes to Ocean City for Cruisin’, both participants and spectators, to respect the town and abide by the rules,” they added.

More information about the Special Event Zone can be found at www.oceancitymd.gov/specialeventzone.

As for the car show, tickets are $10 a day for Thursday and Sunday, while Friday and Saturday will cost $15 per day. Four-day event passes are available for $35 at the event, and kids 14 and younger are free with a paying adult.

Showers and thunderstorms likely - heavy rainfall is possible, especially during the morning. High 76F. Winds WNW at 10 to 20 mph. Chance of rain 100%.