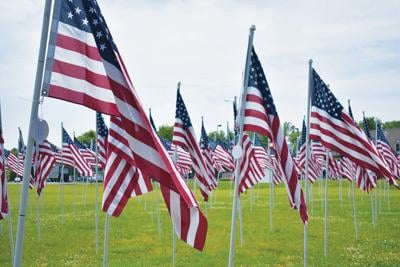 (May 15, 2020) Although the dedication ceremony slated for Armed Forces Day this Saturday was shelved due to the covid-19 pandemic, the Worcester County Veterans Memorial at Ocean Pines’ Flags for Heroes display remains on track.

“We didn’t want to cancel this years flag display because we felt there were more people out there today than ever before that should be thanked for their positive influences on our lives,” she said. “Flags for Heroes is about being an inspiration to somebody.”

In total, 200 flags will shade the landscape to the west side of the Veterans Memorial near Route 589 in Ocean Pines with a patriotic mass of red, white and blue from Armed Forces Day on May 16 through Flag Day on June 14.

Gilmore said while the Flags for Heroes exhibition in Ocean Pines, now in its third year, is essentially unchanged the focus has also shifted to essential workers.

“We never give much thought to how essential they are,” she said. “It’s put them in a whole new light and they are certainly the heroes of right now.”

Largely intended for U.S. Armed Forces members, during the past two years a smaller percentage of flags have been dedicated to heroes of a different ilk.

“It’s an opportunity to say thank you to a veteran for their service and that’s what probably 80 percent of the flags have gone to, but the other 20 percent have always been to other people who have been a hero in someone’s life in some way, shape or form,” she said.

“This year we have that opportunity to say thank you to all those essential workers and hospital employees,” she said. “It’s more of an extension of the program than it is a change of course.”

Appropriate safety measures will be followed during display set up.

“The only people that will be together at any time are the people that are installing the flags and we’re going to take every precaution of social distancing as that procedure is done,” she said. “We felt that it was super important for the display to go up this year.”

The prior pair of Flags for Heroes endeavors, with individual sponsorships costing $50 and corporate partners contributing anywhere from $250 to $2,000, have helped raise funds for the Veterans Memorial.

“That’s not the main point this year because we’re not even going back to businesses and reminding them that they supported us last year,” she said. “We don’t feel the economy is right to even ask that question.”

“We also have Delmarva Power that came right back in and gave us support,” she said.

Gilmore said since sending correspondence in early March to some past sponsors about half of the allotted flags have been reserved.

“We’re getting a little bit of that corporate support but most of what’s coming back are individuals,” she said. “That’s the bread and butter of it, each individual $50 sponsorship.”

Gilmore said the focus shifted after the covid-19 pandemic tossed society a proverbial curveball and regardless of the level of participation the same size display is planned.

“We’re going to put up the 200 flags we put up last year [and each] has a medallion that … names the hero and the sponsor,” she said. “Our focus this year is to have an opportunity to say thank you to all essential workers and let them know they are appreciated and are the heroes in our lives.”

On a separate note, Gilmore said covid-19 pandemic has also delayed plans to mark the 15th anniversary of the Worcester County Veterans Memorial at Ocean Pines this May.

“Memorial Day is the 15th anniversary of the dedication of Veterans Memorial,” she said. “It was dedicated on May 30, 2005.”

Gilmore, who joined the Veterans Memorial Foundation in 2004, credited co-founders Roseanne Bridgman and Board Member Emeritus Sharyn O’Hare for envisioning the project that broke ground on Veterans Day in 2004.

“I was there for the groundbreaking,” she said.

Contingent on ongoing developments, the intent is to mark the occasion at a later date.

“We hope to do that sometime in the fall,” she said. “We still want to recognize the 15th anniversary, it’s important.”