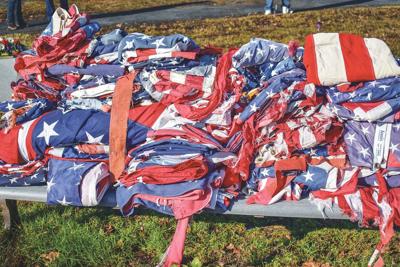 (Nov. 15, 2019) Boy Scouts of Troop 261, Cub Scouts of Pack 261 and Girl Scouts of Troop 621 will properly discard hundreds of flags during an annual retirement ceremony, held at the Worcester County Veterans Memorial at Ocean Pines, Saturday beginning at 9 a.m.

The Ocean City-based scout troops will place worn and torn flags into a fire pit for a respectful burning, in accordance with the U.S. Flag Code. Ocean Pines Public Works and the Bishopville Volunteer Fire Company will assist during the ceremony.

“The American flag means so much to so many people,” Scoutmaster Ken Nichols said. “Just like on Veterans Day, our veterans died trying to protect that flag and what it means.”

A large fire pit will be set up in order to properly retire the flags. Before being placed in the pit, flags will be folded properly, and then sent into the flames with a salute in respect to those who fought and served in the U.S. Armed Forces.

“The American flag isn’t just a piece of cloth ... we’re not just retiring the cloth, we’re retiring the emotion and everything else with it,” Nichols said. “We don’t want that flag to end up in a garbage dump somewhere and that’s why we retire it [this] way.

“I would love to see more of the American public be made aware of the meaning of the flag,” he continued. “There’s been a lot of things in our society over the last couple of years ... people have the right, but it’s a bit of an oxymoron to say, ‘Well it’s my God given right to do X,’ well it’s that same flag that gave you that right.”

The ceremony will end with scouts working together to fold the final flag before sending it into retirement.

Partly cloudy skies during the morning hours will become overcast in the afternoon. High 47F. Winds NE at 5 to 10 mph.