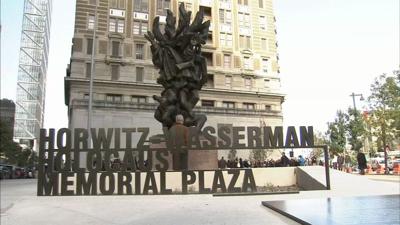 (Nov. 9, 2018) In 1964, the first public memorial to the Holocaust in the United States was unveiled in Philadelphia, located along Benjamin Franklin Parkway. More than 50 years later, the area surrounding the memorial expanded and adopted technological advancements for education and further remembrance.

Ocean City resident Jerry Greenspan spent his childhood in Philadelphia, where the memorial was constructed. His father, Harold, was one of the Holocaust survivors who helped to design and dedicate the first Holocaust memorial in North America.

The bronze-on-black granite sculpture called “Six Million Jewish Martyrs” was the work of artist Nathan Rapoport, who fled his native Poland when the Nazis invaded Warsaw.

“This is a memorial to remember the past and the fathers, mothers, brothers and sisters that never made it here,” Greenspan said. “Their voices will continue to be heard and their stories will never be forgotten.”

Greenspan’s father passed away in January 1999, but not before imparting a special request to his son and daughter regarding the memorial.

“Before he passed away, he asked me and my sister to look into developing this plaza,” Greenspan said. “His request was to take this gift that he left for the Philadelphia monument and to develop the rest of the plaza. It was just a grass plot with a little wall around it, but nothing was there beside trees.”

Greenspan, his sister, Claire Akselrad, and members of the Philadelphia Holocaust Remembrance Foundation began expanding the memorial in 2002, completing the project this year, on Oct. 22. The project took 16 years and cost approximately $13 million to complete.

In addition to the original sculpture, four focal points were also added to the memorial. The new surroundings include three sections of train track from the Treblinka railroad in Nazi-occupied Poland, which are four to six feet long and have been embedded in the pavement. Six pillars were constructed to represent the six million martyrs of the Holocaust.

Another focal point is the now grown sapling of the original Theresienstadt tree raised by students in German occupied Czechoslovakia.

“A teacher and her young children took a portion of their water and nurtured this tree,” Greenspan said. “It grew from a sapling to a large tree and we were given a sapling which is over 20 feet tall now.”

Finally, new trees were planted to represent the resistance and growth, as well as show that life could go on after the Holocaust.

“A survivor who spoke that day said, ‘You can cut the tree down, but the roots survive this horrific event, and we were able to be reborn in a sense,’” Greenspan said. “Our roots of our existence are never exterminated. We have continued to grow and be a part of society today.”

Another addition to the memorial comes from the partnership between the Philadelphia Holocaust Remembrance Foundation and the USC Shoah Foundation to bring educational content and technology to the renovated plaza.

An app specifically developed for the plaza allows visitors to use their phones, iPads and other mobile devices to connect to video testimonials of Holocaust survivors and witnesses. The videos draw from the USC Shoah Foundation’s Visual History Archive, which has over 54,000 eyewitness accounts of the Holocaust, along with photos, documents, maps and other educational materials.

Greenspan hopes the modern technology will help to educate younger generations about the Holocaust.

“What we’re going to do is continually have kids from elementary school to high school go on trips to the memorial provided by the Holocaust museum,” Greenspan said. “Hopefully in the future there will be more stability around the world and that this provides some place of remembrance not only for Jewish people but all religions and a place we can find some compassion and understanding for other people.”

Partly to mostly cloudy. A stray shower or thunderstorm is possible. High 74F. Winds S at 5 to 10 mph.