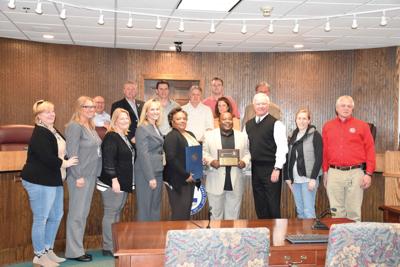 (March 29, 2019) Al “Hondo” Handy has been a pillar at the Ocean City Recreation and Parks Department for nearly 40 years.

After close to four decades of working at the department, located at Northside Park on 125th Street, Handy has decided to end this chapter of his life and start a new one in retirement.

Handy already has some plans for his retirement, such as writing books about his experiences, particularly about his favorite basketball player, John “Hondo” Havlicek, who inspired his love of sports.

Before he enjoys that chapter of retirement, however, Handy wants to raise money and awareness about cancer for the John H. “Jack” Burbage Regional Cancer Center in Berlin.

“Everybody’s affected by cancer,” Handy said. “My mother had cancer, a few of my really close friends that worked with me here had cancer, a number of family members had cancer. I said when I do retire, I’m going to try and do some kind of cancer fundraiser. We just recently got this facility here in AGH and I’m like, ‘This is the perfect timing for me.’”

An Eastern Shore resident for most of his life, Handy attended Stephen Decatur High School, where he was a member of the 1970 state championship basketball team.

He studied physical education at Salisbury University. During his college years, he played basketball, baseball and soccer. After suffering an injury, he decided to become a student assistant director, where he discovered his love for managing sport clubs and activities.

“I’ve been here for a long while. I have a lot of friends [and] a lot of kids that I started with now have their kids and they’re coming back to the program and they’re coaching for us,” Handy said. “They knew our philosophy and I was just hoping that this would be an opportunity for not just me to give back, but everybody that’s been touched with cancer to give back too.”

For Handy, working at the Recreation and Parks Department didn’t feel like work because he loved the job so much.

“Sports has always been a part of my life. If you love it, it seems like you’re not working,” Handy said. “It feels like there’s not enough time in the day. That’s what happens because you’re always trying to make things as perfect as you can.”

Over the years, Handy has been recognized with many awards, including the Citation Award by the Maryland Recreation & Parks Association, Best Youth Organization Director by Coastal Style Magazine, and Ocean City Citizen of the Year in 2015 by the Ocean City Chamber of Commerce and the Ocean City Elks Lodge.

Handy will officially retire from his position on Sunday, March 31, after 39 years and three months of service, and will host a retirement party next Friday.

Tickets are available to celebrate Handy as he prepares for retirement with a fundraiser for cancer in Morley Hall at Seacrets on 49th Street, Friday, April 5, from 6-9 p.m.

The event will include music by DJ Tuff, food provided by Seacrets and comments from several guest speakers from the Recreation and Parks Department, including past directors.

Susan Petito, director of the Ocean City Recreation and Parks Department said Handy has positively impacted the lives of thousands of people.

“His charismatic smile and bubbly laugh draws people in, and you just can’t help but to love him right away,” she said. “He has been our liaison to the community for most of his career, and his outreach has brought tremendous goodwill and support to the department. He has embraced this community as his family, and I believe the community has embraced him in the same way.”

He has served on the board of the National Alliance of Youth Sports, bringing coaches trainings to the department and spearheading a Global Gear Drive to collect sports equipment to send to underprivileged children around the world, Petito said.

He has been the department liaison to the Ocean City Drug and Alcohol Committee since its inception, and has been a key player in the Play It Safe program offered to high school graduates each June in Ocean City.

“Hondo has been the face of our department for many, many years. He’s been an excellent representative of what’s great about recreation and parks, and he will be dearly missed,” Petito said.

Handy wants people to know the April 5 event is not just a retirement party, it is a celebration.

“I’m calling it a celebration because it is going to be a celebration,” Handy said. “So just come and have fun. Help me celebrate my new chapter of my life and wish me well.”

Tickets cost $40. To purchase a ticket, text OCHONDO to 41444, or visit www.atlanticgeneral.org/ochondo.