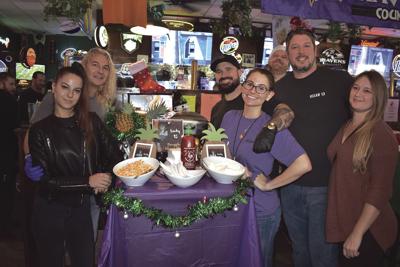 The Cookoff raises funds and collects toys for Worcester County G.O.L.D. (Giving Other Lives Dignity), a local nonprofit helping children, adults and families in need during the holiday season.

“Originally, it was started by the parrot heads, the Parrothead Club of Ocean City, which is unfortunately no longer in existence, but it’s something that they started years ago to help benefit Worcester County G.O.L.D. and get toys for needy families in Worcester County,” said Chili Cookoff Organizer Joel Feldman of the Horizon Group Team at Keller Williams Realty.

For 19 years, the Parrothead Club of Ocean City sponsored the Chili Cookoff and when the group disbanded, Feldman and his team offered to take over the event.

“Once the Parrothead Club went away, we didn’t want to see it stop,” Feldman said. “We’ve all kind of pitched in and everybody’s continued to keep it going.”

Several restaurants will provide samples of their chili, ranging from spicy, hot and mild in the attendee-judged competition.

Attendees will vote for their favorite recipe to determine which restaurant will take home the top prize. First place will receive $250, second place and best in show will each take home $100, and $50 will be given to the third-place finisher.

There will also be a best in show award, which has nothing to do with chili and everything to do with how the restaurants involved decorate their stations, Feldman said.

“We don’t want people to show up with a black tablecloth and say, ‘Here’s our chili,’” he said. “We want them to get into it, especially during the holidays.”

Music will be provided by a DJ, and drink specials will also be available.

Last year, about 200 people attended the event and donated enough toys to fill two SUVs for Worcester County G.O.L.D. About $3,000 was raised for the organization as well.

“The toys came in and there’s just so many of them that it’s just hard to accurately count how many we had, but it was a pretty big amount,” Feldman said.

The event is sponsored by the Horizon Group Team at Keller Williams and Shore Grounds Maintenance.

Greene Turtle West, is one of the key components of the competition, Feldman said.

“Just the fact that the Greene Turtle basically closes down their whole operation … they take all the tables out, they take all the booths out … there is food available, however, they close down for the event,” Feldman said. “They really do give up a lot for us to be able to hold the function there because it’s a lot of work for them as well. So we just want to make sure that people understand what they’re sacrificing as well.”

“Any restaurant that wants to get in they can still get in,” Feldman said. “It’s a good time. And honestly, it’s gotten fairly competitive these last couple of years.”

The cost of admission is $10 or a new, unwrapped children’s toy. Worcester G.O.L.D. asks that donations not include toy weapons, jewelry or singular gifts exceeding $40 in value.

Restaurant representatives can sign up to participate in the Chili Cookoff by contacting Feldman at Joel@HorizonGroupRealEstate.com or call 410-365-7344.