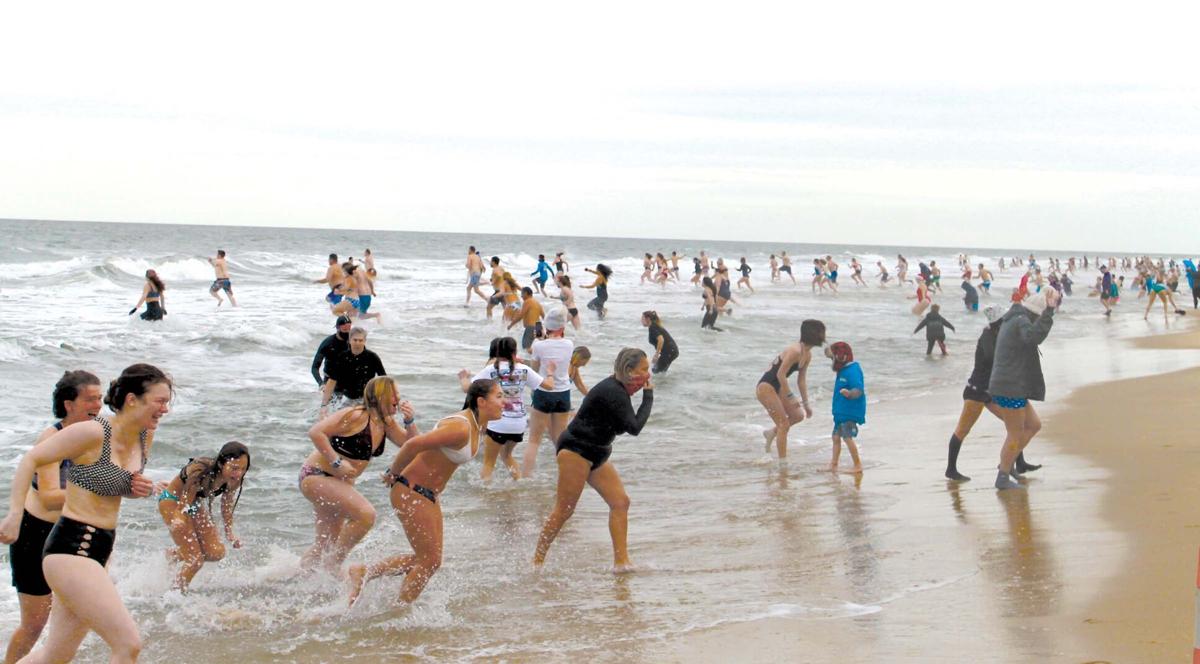 More than 400 penguins take a dip in the 47-degree ocean on New Year’s Day during the 27th annual Atlantic General Hospital Penguin Swim, held between 91st and 94th streets. See story on page 21 and more photos on page 30. 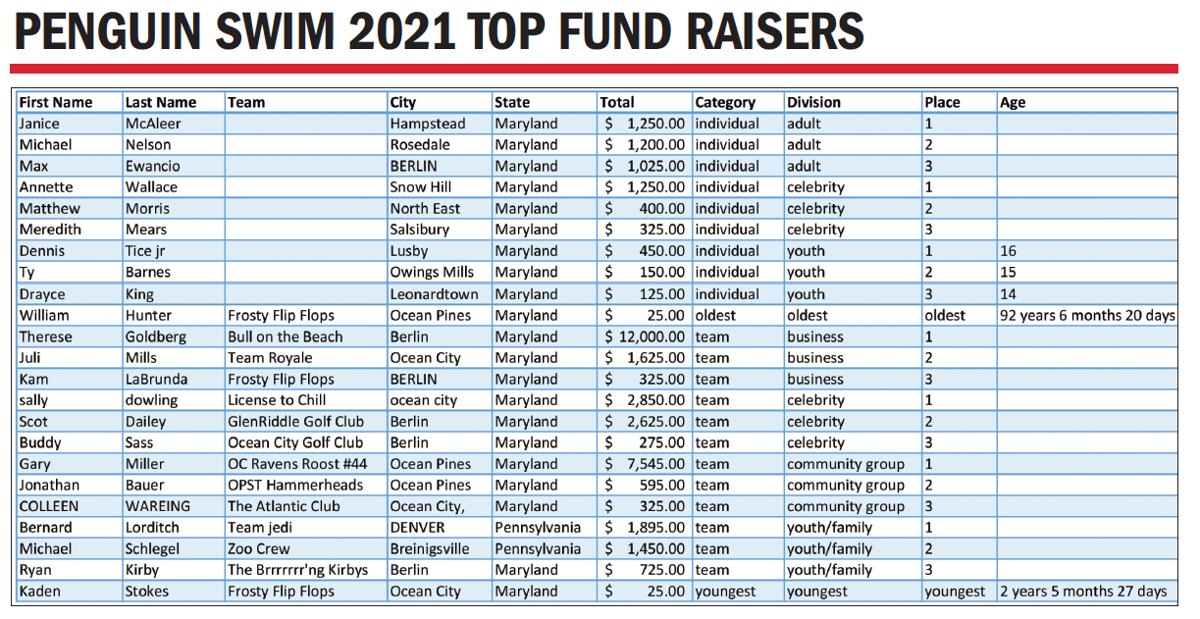 More than 400 penguins take a dip in the 47-degree ocean on New Year’s Day during the 27th annual Atlantic General Hospital Penguin Swim, held between 91st and 94th streets. See story on page 21 and more photos on page 30.

“[A total of] 389 registered directly for the Penguin Swim, with an additional 130 through Bull on the Beach,” said Director of Marketing for Atlantic General Hospital, Sarah Yonker.

“Overall, I think the event went swimmingly well,” said Michael Franklin, president and CEO of Atlantic General Hospital, who participated in the swim with his children, Nick and Lilli. “There was a lot of positive energy on the beach. The multiple-block registration setup kept people safe and moving, the PA system used in the lifeguard stands kept everyone informed and engaged while waiting to jump in, and the weather cooperated once again.”

Typically, the event takes place on the beach and in the water on 91st Street. This year, the swim area was increased from 91st to 94th streets because of covid-19 and social distancing restrictions. Masks needed to be worn while on the beach, but not required when in the water.

Cones were also set up along the beach to promote social distancing.

“The cone setup was a great idea. It was very straightforward, and clearly demonstrated the expectations for keeping everyone safe,” Franklin said. “It appeared to me that everyone respected the rules and the spacing because of the cones. It also made it helpful to find your stuff when coming back out of the ocean. I believe this was a very successful event in the midst of difficult circumstances.”

“We didn’t assign individual cones, but we had registrants assigned to different beach entrances to keep the event more orderly and to enhance social distancing efforts,” Yonker added. “Once participants and their spectators were on the beach, they were asked to choose a cone and stay with it … Ocean City Beach Patrol did a wonderful job distancing the cones so there was a 25-foot radius around each one.”

Colby Phillips, director of Amenities and Operational Logistics for the Ocean Pines Association, as well as a part-time sergeant and longtime member of the Ocean City Beach Patrol, was again the Penguin Swim emcee and helped set up the beach in the 48-degree weather, for the event.

“I actually liked the setup this year better,” she said. “From where I was, which is in the guard stand in the middle, having everyone spread out along several blocks really was nice because people were not running into each other. Everyone was very respectful of the spacing and staying in their groups and wearing their masks when not running into the ocean, which was awesome.”

Phillips took the plunge for the first time in 1999 with the OCBP. She started assisting with the event the next year. She has been the emcee since 2009 and a member of the event committee for several years.

“I think it went great. With covid being a factor, for safety the staff and committee did a fabulous job with all of the details,” Phillips said. “This event takes a long time to prepare for every year and covid added challenges, but it went off great and safe and that was the goal.

“I love this event, not just because it’s funny to watch people run into freezing cold water screaming, and I enjoy having a microphone and an audience,” she added laughing, “but AGH is a fabulous hospital with an amazing team of many different people in many roles and seeing the community come together to support the hospital is really cool.”

Those who were unable to participate in the Ocean City event, had an opportunity to do a virtual swim, where they could go into the water wherever they were and post videos and photos on social media using #OCPenguinSwim.

Bull on the Beach on 94th Street, has been participating since the first year. The team has raised more than $642,000 for the Berlin hospital.

Overall, nearly $1.6 million has been generated through the swim since its inception.

An awards ceremony recognizing top fund raisers in several categories is usually held each year inside the Princess Royale on 91st Street, but because of covid, a virtual event will take place instead next week.

A mix of clouds and sun this morning, then becoming windy with thunderstorms developing this afternoon. Storms may contain strong gusty winds. High 66F. Winds SW at 20 to 30 mph. Chance of rain 90%.