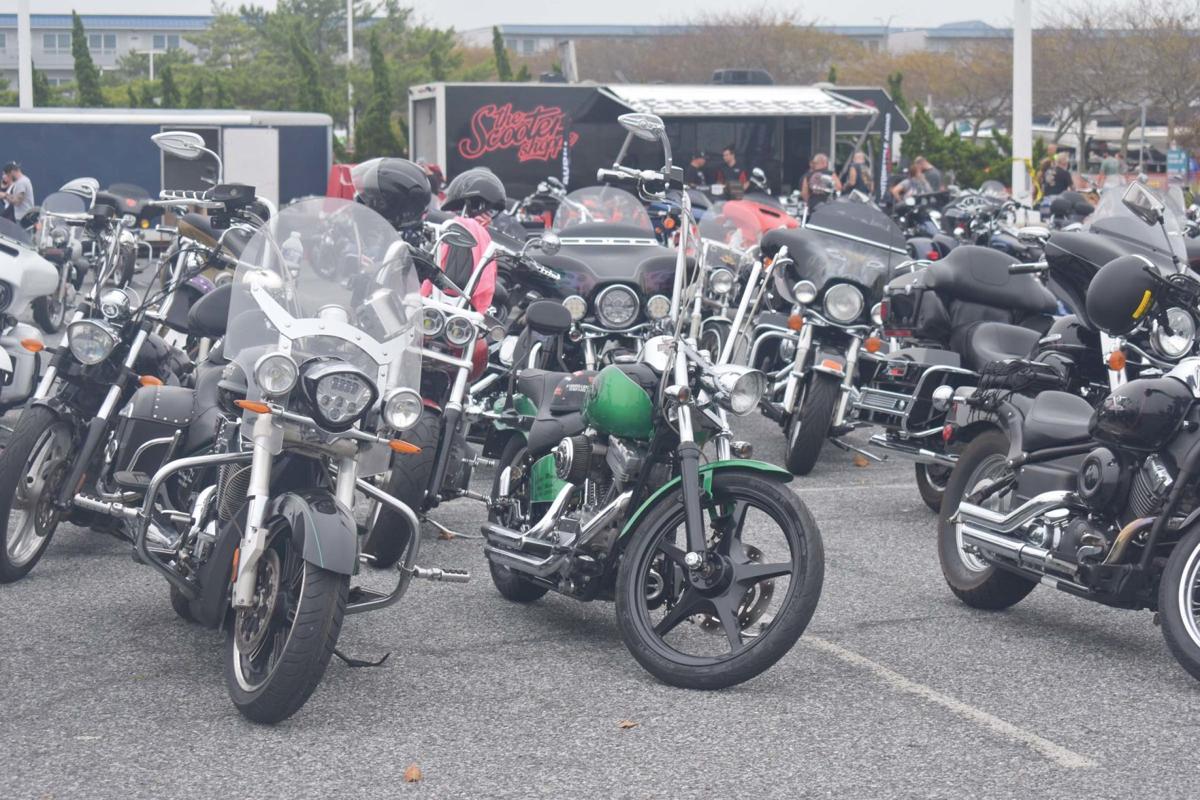 Thousands of motorcycle riders will come to the resort for the 19th annual Delmarva Bike Week, the ninth annual Ocean City BikeFest and the 11th annual Bikes to the Beach, this weekend to check out various new models, merchandise and participate in activities. 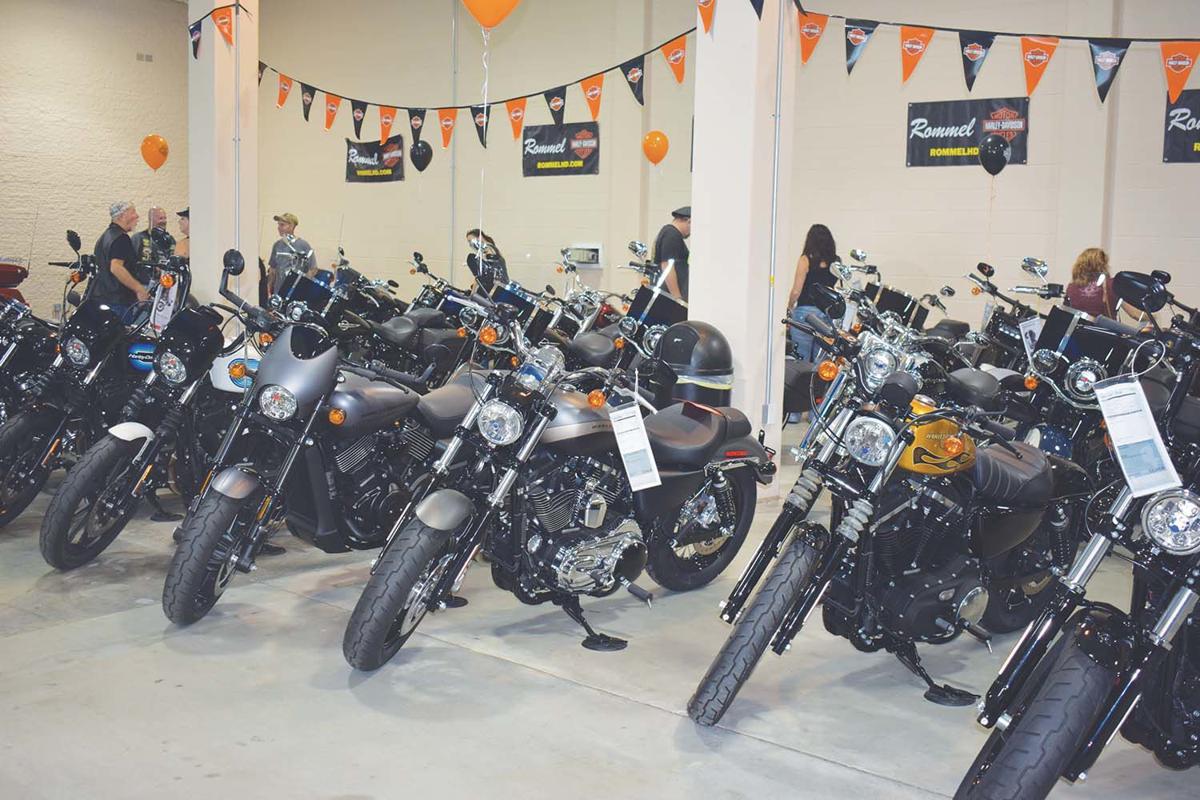 Motorcycles and merchandise will be on display at the 40th Street convention center parking lot this weekend.

(Sept. 13, 2019) Thousands of motorcycle owners and enthusiasts will be in town for the 19th annual Delmarva Bike Week, the ninth annual Ocean City BikeFest and the 11th annual Bikes to the Beach, all of which kicked off on Thursday.

Events taking place throughout the weekend include live music, motorcycle demos and shows and hundreds of vendors selling merchandise.

BikeFest activities have taken over the inlet parking lot and outside the convention center on 40th Street.

The event draws as many as 150,000 to 175,000 attendees, and is one of the largest motorcycle festivals in the country, ranked third only to Daytona, Florida, and Sturgis, South Dakota, according to Event Organizer Chase Micheal.

“There are two other weekend rallies that are arguably very similar … one is in Arkansas and one is in Florida,” Micheal said. “But for all intents and purposes, we are the largest weekend rally.”

Outside the convention center, tents contain dozens of vendors selling a variety of bike merchandise and offering promotions. Food and drinks will also be available for purchase. There will be craft beer for sale as well.

“New for this year, at the inlet, we will have a custom semi [truck] that is a tribute to veterans that will be on site and on display,” Micheal said.

The concert times have changed as well, with musical acts finishing up at 9:30 p.m. The main acts will end at 8 p.m., and another band will play for an additional hour and a half.

Free parking for motorcycles is available on a first come, first serve basis and entry to the convention center is free. Activities excluding concerts are free as well.

Tickets for concerts during the event costs $80 for a weekend pass or $45 for a day pass.

Ticket holders can also purchase a commemorative OC BikeFest and Delmarva Bike Week poker chip for $5 each, while supplies last.

Visit www.ocbikefest.com to purchase tickets and for a full schedule of concerts and events.

“This year kicks off efforts to leave only our footprints in the sand,’’ Micheal stated in a press release. “We are taking action to reduce single-use plastic products such as bags, bottles and straws, recycling cans and asking vendors to begin using compostable materials.

“Since September of last year, we have been planning ways to make OC BikeFest [greener],” Josh Chamberlain, founder of Go Green Ocean City, stated in a press release. “We will be implementing phases over the next five years which will have a positive impact on our environment and surrounding communities. We will make OC BikeFest the model event nationwide.”

Those who volunteer with Go Green OC will receive a free entry to the event all weekend long and free bus rides.

“The Delmarva Bike Week was created by the dealership – the local Harley dealership. It was out of necessity for getting people together to ride on the Eastern Shore,” Micheal said. “It’s grown into one of the largest motorcycle rallies in the country beside Sturgis and Daytona. It’s probably the second or third largest [motorcycle] event in the country.”

Delmarva Bike Week Cruzin’ the Coast participants will ride around to eight locations throughout Wicomico and Worcester counties. Riders have the opportunity to choose between taking their own routes or using the suggested one by the event.

Riders must get all eight destinations/sponsors to stamp the playing card to be eligible for the cash prize drawings. They will have more than three days to complete their stamps.

Registration costs $25 and includes a Cruzin’ the Coast T-shirt and the playing card/map. The events start at 9 a.m. and end at 7 p.m.

New this year will be the Hooligan Race, which will take place at the stadium beginning at 3 p.m. The race will be a 1/8-mile grass race on Saturday.

Classes range from Hooligan, Vintage, Pull Start (also known as a Boonie) and Mini Bikes. Riders must be 18 years or older to participate and cannot have a pro license, lights or front brakes. Heats will comprise of six laps and the main event will have eight.

Musical acts include The Roadduck Show, Brickyard Road Show, Jason Morton and the Chesapeake Sons, Poverty Ridge, The Bodine Brothers, The Few and The Original Booze Brothers, all of whom will perform live during the event.

Vendors will range from clothing to accessories for motorcycles and cars, lights and other merchandise.

• Bikes to the Beach:

At Hooper’s, located at the base of the Route 50 bridge, visitors can listen to live musical entertainment Friday and Saturday, in addition to checking out several vendor booths.

“It’s always been a relaxed, fun atmosphere. It’s free and kind of an easy event for bikers to come down to, walk down and see the scenery and listen to some music and grab some good food,” Hooper’s Manager Patrick Brady said. “There’s plenty of parking and a lot for bikers to do.”

The vendor booths will feature merchandise for sale such as LED lights, T-shirts, patches, head gear, custom seats and accessories for bikes.

“We’re really excited, especially after last year where they called for a state of emergency so a lot of the biker crowds canceled their trips, so we’re looking forward to a nice crowd this year and welcoming them back to Ocean City,” Brady said.

At Oasis Bar N’ Grill in Whaleyville, several activities will be set up including a battle between greased midgets and pigs on Saturday and Sunday from 2-5 p.m. In addition, meet MC Sean Allison, star from “Boardwalk Empire” and “The Wolf of Wall Street.”

Thunderstorms likely this evening. Then a chance of scattered thunderstorms overnight. Low 73F. Winds light and variable. Chance of rain 100%.

Variable clouds with scattered thunderstorms. High near 80F. Winds ESE at 5 to 10 mph. Chance of rain 60%.