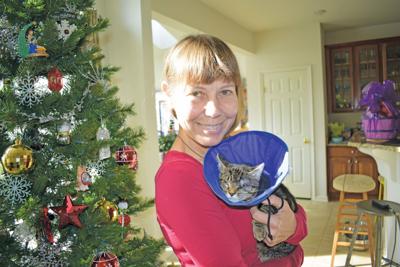 (Jan. 3, 2020) Susanne Hoshino has helped nearly 2,000 animals through her organization, Kindness Matters Rescue, which she founded in 2010.

For the last 10 years, Hoshino has lived by her motto, “working together we save them, because every life matters.”

Hoshino, a resident of Berlin since the 1980’s, has spent her life caring for animals and people alike. Equipped with medical knowledge and experience from her former occupations as a nurse and physical therapist, Hoshino uses her skills to help rescue and tend to animals who would otherwise be euthanized and forgotten.

In 2019, Hoshino rescued 296 animals – 196 dogs and 100 cats – spanning from multiple animal control facilities and kill shelters in Maryland and Virginia.

Since she first started Kindness Matters Rescue, she has rescued just under 2,000 animals, ranging from cats and dogs to more unusual animals like raccoons.

“Rescuers are usually optimistic and try to look at the positive side,” she said. “So, I just feel happy that I could help all those animals.”

Most of the animals she has rescued were expected not to survive, riddled with illnesses, starvation and in poor living conditions. Hoshino used her medical training to nurse hundreds upon hundreds of animals back to health and worked around the clock to find them a forever home.

Hoshino travels around picking up animals from shelters. She receives very little monetary assistance from the community, spending a large sum of her own money to care for her rescues.

After nursing the animals back to health, she sends them off to various rescue operations all across Delmarva, spanning as far away as Hughesville, Maryland, to Wilmington, Delaware. She works with more than 25 animal rescue organizations including Worcester County Humane Society, Town Cats and K9 New Life.

Hoshino takes in just about any animal she can, because in her mind, all animals are worth saving. She uses every available space in her own home to care for these rescues.

There have been many unique cases for Hoshino throughout the years, including just recently when a homeless woman came to her home to ask her to take care of her dog, Mr. Duke, while she stayed at a shelter that could not accept her pet.

“I saw them on my doorstep and it was freezing cold, and here it is, Christmas time, and they had nowhere to go,” Hoshino said. “She came to my door wearing flip flops and my heart just broke for them.”

Mr. Duke is an older dog with a large tumor on his stomach. Hoshino said she will check with a vet to see if it is safe to remove.

The woman plans on returning for her dog once she gets back on her feet, Hoshino said.

Kindness Matters Rescue was approved as a nonprofit in May, which enables her to rescue more animals, she said.

Those rescued will be trained to become service animals for veterans and people with disabilities.

“I had saved a lot of animals not being a nonprofit, but I really thought it through and I felt I could save more and do more if I became a nonprofit,” Hoshino said. “That’s why I took that step, and while there’s an expense to it and there’s a lot of paperwork to it … it has been a good decision.

“Animal controls in the state of Virginia will only release to a nonprofit if the animal is going to cross state lines or the animal is not fixed before it leaves a shelter,” she continued. “That gave me the ability to go there and get the animals directly into my nonprofit.”

Hoshino also has three foster families in the area that she can rely on. Those fosters – Shannon Savage Lindsey, Yvonne La Chapelle and Jacqueline Martins – help her save as many animals as possible every year.

“By having fosters, you save lives because it gives the animal a place to stay [and] it allows the animal to be in a home and decompress, which is a lot different than being in a scary animal control,” she said.

Hoshino encourages the public to contact her if an animal needs assistance, and to adopt rescue pets. She accepts pregnant mothers, bottle-fed babies … any pet in need. She is also looking for more families who are willing to foster animals.