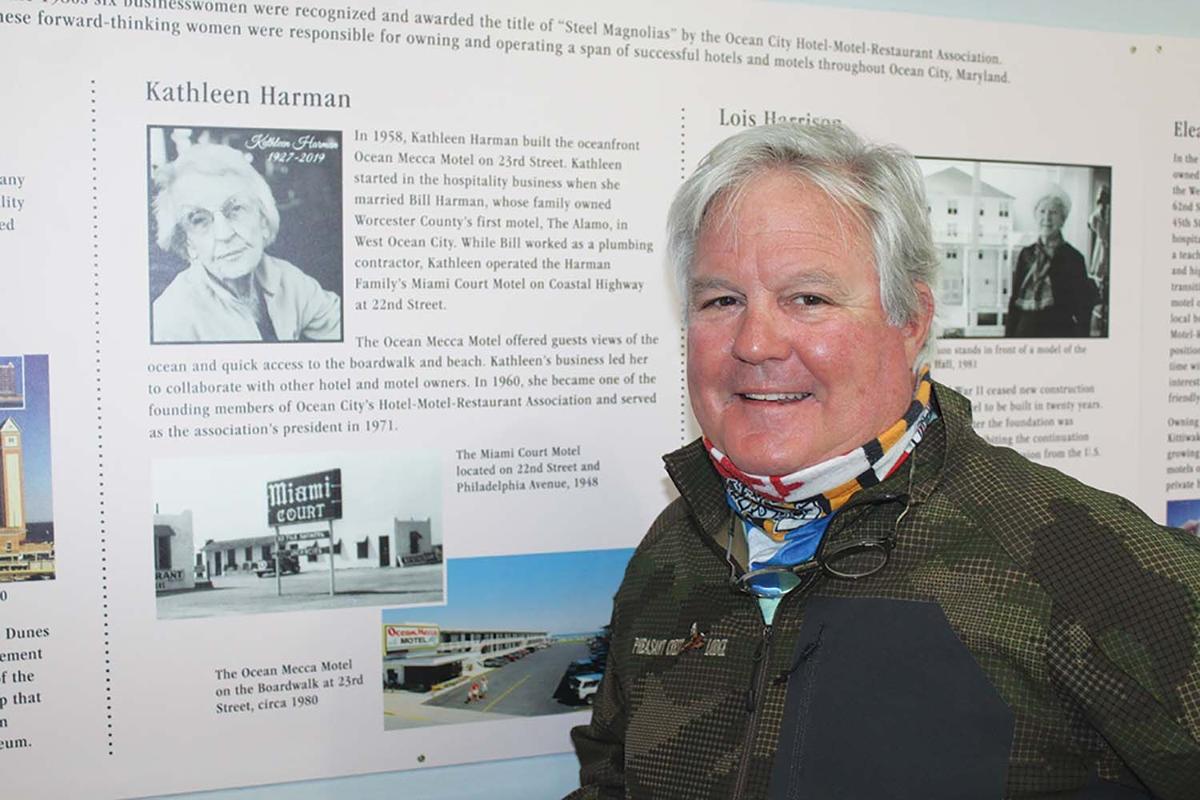 Shawn Harman, owner of Fish Tales and Bahia Marina on 21st Street, remembers his mother, Kathleen, as someone who always looked out for others before herself, evident through her role in founding the Ocean City Hotel-Motel-Restaurant Association. 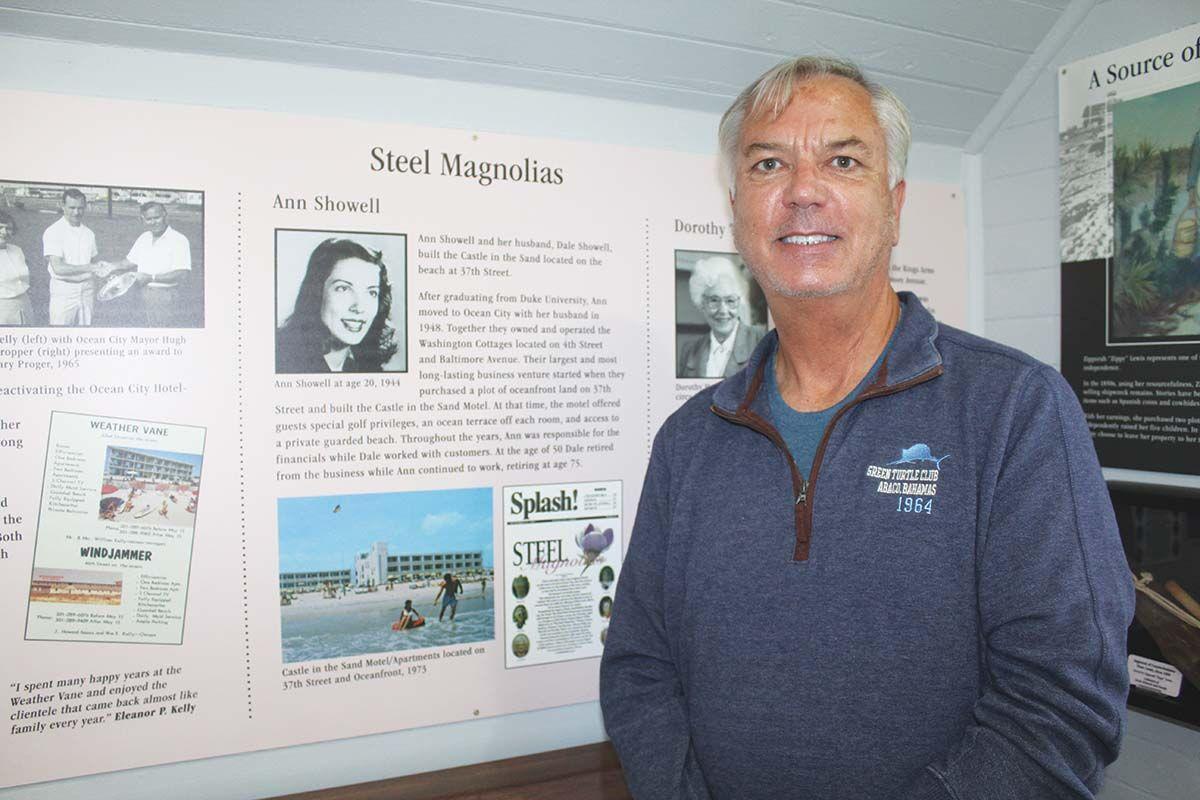 Adam Showell, Sr., owner of Castle in the Sand Inc., said it was his mother, Ann, who acted as bookkeeper for Castle in the Sand Hotel, then motel, located on 37th Street. Showell said his father, John Dale, was the visionary, while Ann was the detail person.

(Oct. 9, 2020) The Ocean City Life-Saving Station Museum kicks off this year’s History Week with a new exhibit in tow, “A Feminine Touch,” which commemorates the women who helped build the resort from the ground up.

Entry into the museum, located on the southern end of the Boardwalk, will be free for area residents all History Week, from Oct. 10-16.

“History week highlights the mission and objectives of the museum, which inspire and bring into focus where we as a town come from,” museum board President Nancy Howard said. “It can help us decide where we’re going. History week exemplifies that mission and those objectives, [and] we hope that people will take away a better idea of why OC is so special.”

One aspect of Ocean City’s history that the museum seeks to highlight are the women who helped build the resort’s tourism industry.

“It [a feminine touch exhibit] focuses on women from the 1800’s all the way up through the early 1990’s,” Museum Assistant Curator Christine Okerblom said. “Some of them partnered in business with their husbands, but a lot of these women in this exhibit did it themselves entirely.”

Unlike the women of their time, Ocean City women largely ran the show. While the men went to the docks, the women operated the hotels, motels, restaurants and storefronts.

Among the many female pioneers were Kathleen Harman and Ann Showell — two of six women recognized as Ocean City’s powerhouse entrepreneurs, formally celebrated in the 1980s as the Steel Magnolias.

Harman, alongside her husband, Bill, whose family owned Worcester County’s first motel, The Alamo in West Ocean City, built the Ocean Mecca Motel on 23rd Street, which is still in operation, and the Miami Court Motel on 22nd Street.

In 1960, she co-founded the Ocean City Hotel-Motel Restaurant Association and became its president in 1971.

“She was unafraid,” said her son, Shawn, who owns Fish Tales restaurant and Bahia Marina on 21st Street, bayside. “At times she was unfiltered — she would say what everybody was thinking, but was too afraid to say.”

Harman said his mother was an advocate and pushed for collaboration between the public and private sectors in order to not only help Ocean City thrive, but also hold its elected officials accountable.

“She started the Ocean City Hotel-Motel-Restaurant Association in an effort to get more pressure on the politicians to make things better for us,” Harman said.

Harman said just like other Ocean City women, his mother was the driving force of the family.

“All of these people that are up here [the exhibit] have hardworking husbands, but the husbands were in the background and the women were out front,” Harman said. “My father built the motel, but my mother ran it.”

Even long after she retired, Harman said his mother remained the matriarch of the family.

“She’d come into the restaurant and sit down and everybody would come over and call her ‘Nana’,” Harman said. “They [employees] work for my wife and I, but she was still head of the family.”

Ann Showell played a similar role for her family’s business — the Castle in the Sand Hotel, then motel, located on 37th Street.

Although Showell came from an educated background, graduating from Duke University, she spent the first several years of her life in Ocean City playing the role of mother and wife.

Once all of the children grew old enough to take care of themselves, however, Showell reentered the business world and began running the financial operations of the Castle in the Sand.

“She became the controller of the console, bill paying, income statements and cash flow, because those were details my father, [John Dale], didn’t know too much about,” said her son, Adam Showell, Sr., who owns Castle in the Sand Inc. “He was the visionary and she was the detail person — that’s what made them a great match.”

Showell said his parents loved working together and did so happily until Dale retired at the age of 50. Ann did not retire until she turned 75.

While Ann was a force to be reckoned with, Showell said his mother maintained a robust social life and made it her priority to take care of her family and others before herself.

“Mom was loved by all and she always returned it,” Showell said. “She had the most spectacular friends from living in Ocean City and even though she loved North Carolina, [where she was born and raised], Ocean City was everything to her.”

This year’s history week will look slightly different, but will offer plenty for residents and guests to do.

On Sunday at 1 p.m., the museum will do a live broadcast of its, “Pieces of Our Past,” program featuring never-before-seen artifacts.

A wooden leg, original rocking chairs from the Commander hotel, and a 1940s chocolate bar in the shape of a whiskey bottle are just a few items that will be showcased.

“Pieces of Our Past” is a fundraiser for the George and Suzanne Hurley Memorial Scholarship Fund. This scholarship is open to Stephen Decatur High School graduates who plan on furthering their education at Salisbury University, Wor-Wic Community College, or UMES.

In collaboration with the Worcester County Library in Ocean City on 100th Street, a tour of the museum centered on the life of a U.S. life-saving service keeper will be held on Monday from 1-3 p.m. There will also be a discussion of the book, “In the Heart of the Sea.”

On Tuesday at 2 p.m. at the library, there will be a screening of the film, “Ash Wednesday Storm,” which documents the storm of 1962.

All week long at 1 p.m., the museum, in its boat room, will host a free program called, “History of Our Surfmen,” which will showcase the equipment used by keepers during rescue missions.

Cloudy skies early, then partly cloudy in the afternoon. High 73F. Winds S at 5 to 10 mph.