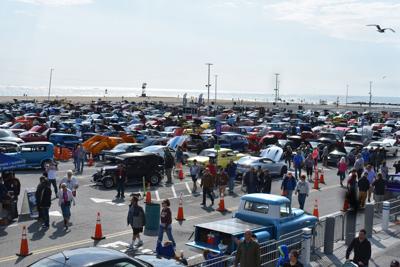 (Oct. 9, 2020) Engines will roar this weekend, as car enthusiasts return to the resort for the 23rd annual Ocean City Endless Summer Cruisin’ event.

Admission cost is $15 on Friday and Saturday and $10 on Sunday. Children under 14 get in free with an adult.

Bob Rothermel, owner of T.E.A.M. Productions and co-producer of the event, said the Cruisin’ brand, which includes spring’s Cruisin’ Ocean City and fall’s Endless Summer Cruisin’, got its start about 30 years ago when car shows first began growing in popularity.

“We were seeing these small parking lot events in the metropolitan area — the Baltimore, Washington, Annapolis corridor — and we were seeing it grow,” Rothermel said. “We thought, ‘Gee, what if we harness that and create one big event?’”

Originally, the event started off as an addition to the newly formed Springfest festival, and a few years down the line Endless Summer Cruisin’ was tacked on.

As the event grew, however, it became its own activity to help extend the resort’s peak season.

Rothermel said there were several factors that made Ocean City an ideal location for car shows.

“It’s the beach — what is more iconic than taking a picture of a classic car in front of the beach?” Rothermel asked. “Ocean City is a magnet that draws people and it’s conveniently located between Baltimore, Philadelphia, Pennsylvania, and Washington D.C.”

While the event’s prime market is the Mid-Atlantic region, Rothermel said the car show attracts people as far west as Indiana and as far south as Florida.

This year, covid-19 killed the spring edition, which had been scheduled for May 14-16, and while the fall event has survived so far, Rothermel said the unpredictable nature of the pandemic could prove fatal at any moment.

“The challenges are still here,” he said. “We never know, as an independent promoter, whether or not the government will shut it down. If there was a spike in cases all of a sudden they could shut us down tomorrow.”

To do so, Rothermel said the organizers have worked closely with the Worcester County Health Department and will be requiring masks, install hand sanitation stations at each event location, place markers to encourage one-way traffic, spread out vendor booths and widen aisles to allow more space between participants.

All staff will be screened every morning, front staff will wear masks and gloves, sanitation will be frequent and Plexiglas walls will be installed where possible.

Final pre-registration sign-ins will take place Friday and Saturday from 7:30 a.m. to 4 p.m. at the convention center.

Scheduled to appear this year is television personality Aaron Kaufman of “Shifting Gears” and “Fast N’ Loud.” Kaufman will be at the beachside inlet on Saturday from 10 a.m. to 3 p.m.

Vendors also will set up shop inside and outside of the convention center.

New this year will be a drive-in movie at the inlet lot scheduled today and Saturday at 7 p.m.

Participants will have to pay for parking in the inlet lot.

There will be car shows and corrals at the inlet lot and convention center Friday from 9 a.m. to 5 p.m., and on Saturday there will be a neon and LED light show at Trimper’s Rides on South First Street.

Remaining on schedule this year is the event’s iconic Boardwalk parade.

“The Boardwalk parades originated with Cruisin’,” Rothermel said. “No one was doing anything like that and we looked for something unique so that people would want to come to Ocean City to be a part of it.”

The Boardwalk parade was key to the event, as the first had been scheduled for a Thursday to help extend the weekend room stays, Rothermel said.

The parade will kick off at 8 a.m. today and Saturday, beginning at 26th Street.

“We’ve heard nothing but positive feedback for deciding to move forward, rather than canceling it,” Rothermel said. “We think the negative wrap that some car shows get — we’re going to be able to take care of our own. I think everyone is looking forward to a great weekend and hopefully we’ll be able to enjoy shows like this for a long time to come.”

The city has been under Special Event Zone regulations since Tuesday, which means the speed limit is 30 mph, fines are higher and enforcement will be stricter, including the possibility of arrest.

To learn more about the Special Event Zone visit https://oceancitymd.gov/oc/departments/police/special-event-zone/

Showers in the morning, then becoming windy with a steady rain in the afternoon. High 71F. S winds at 10 to 15 mph, increasing to 25 to 35 mph. Chance of rain 100%. Rainfall near an inch. Winds could occasionally gust over 50 mph.