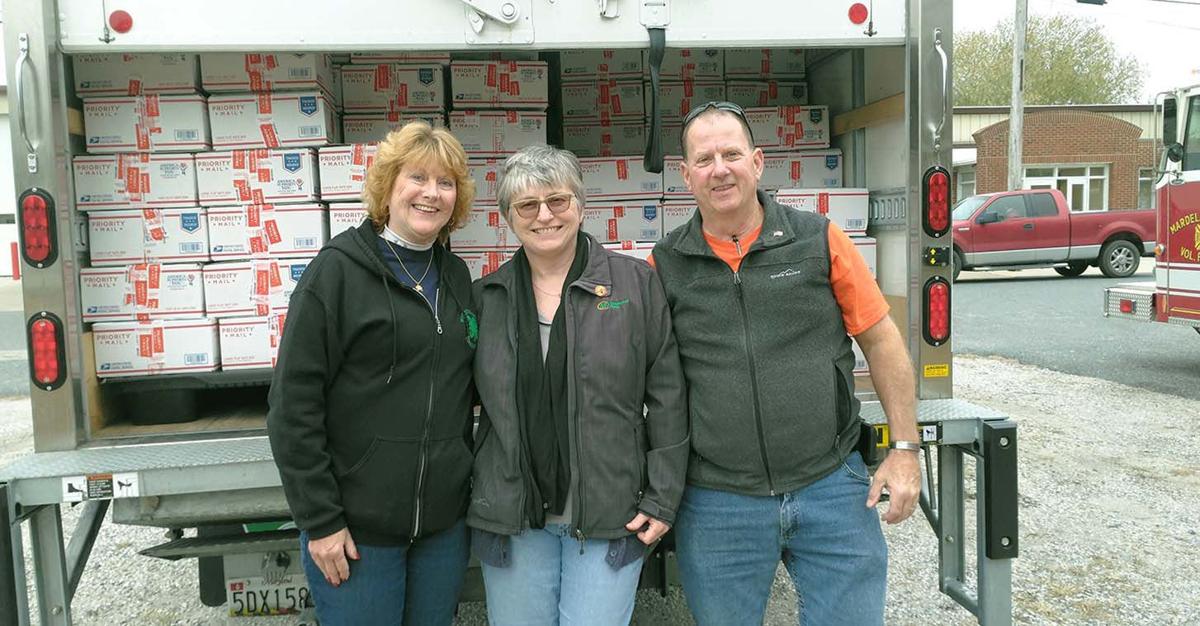 Kathy Decker, left, co-leader of 4-H Voyagers Club and Diana and Jeff Merritt, founders of Operation We Care stand in front of one of two trucks containing a total of 1,200 boxes for U.S. military during the 25th packing party held in Mardela Springs, Maryland on Sunday, Nov. 17. 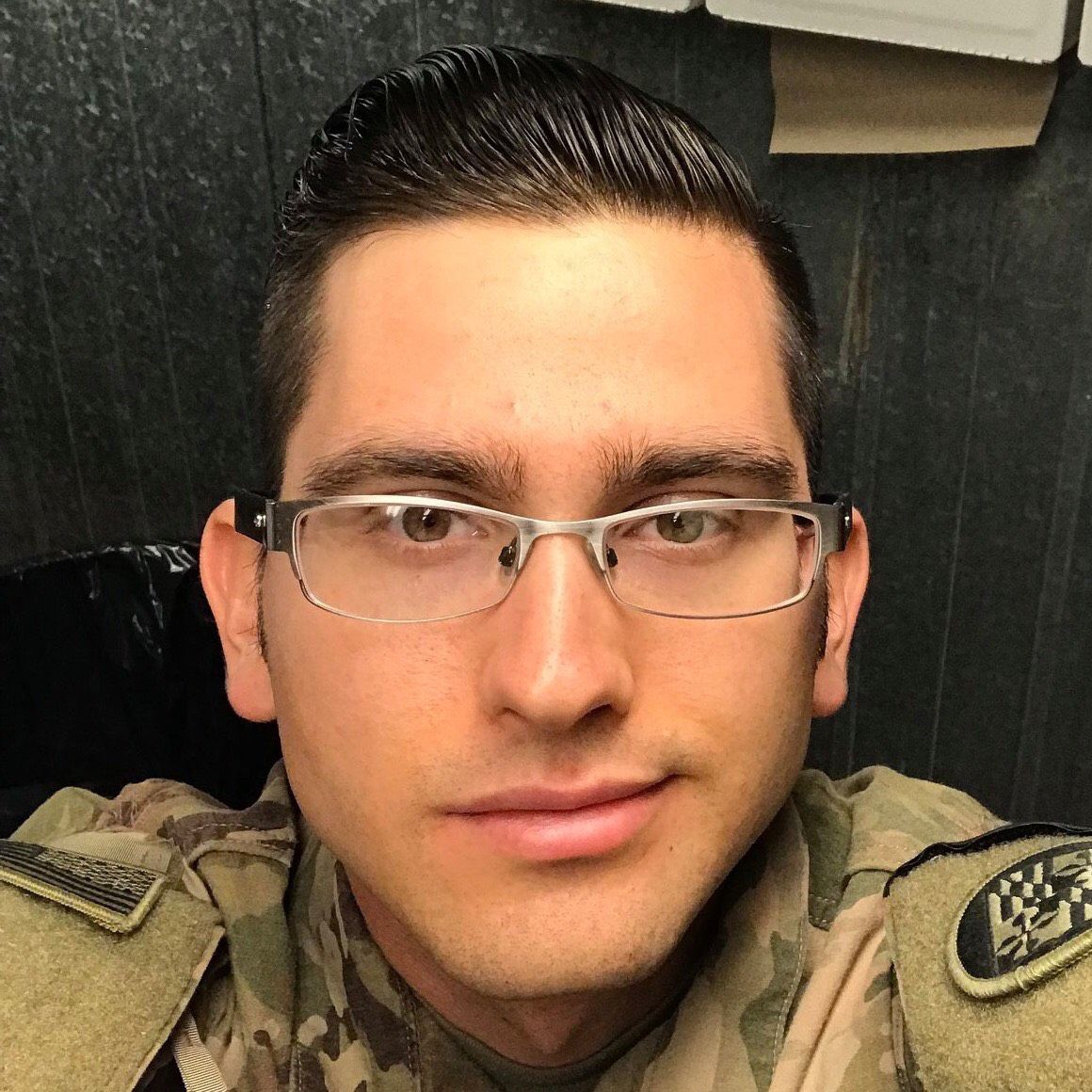 Tyler Kennedy is a Worcester County local who is currently deployed overseas in Afghanistan until early 2020. 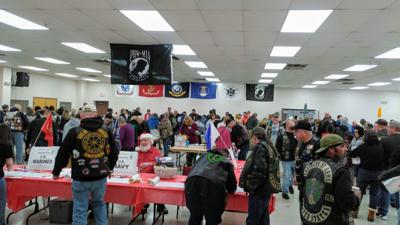 (Nov. 22, 2019) Members of the Worcester County 4-H Club and Operation We Care volunteers packed around 1,200 boxes to send to U.S. troops overseas, including more than 150 to a Worcester County resident and his unit.

Stephen Decatur High School graduate Tyler Kennedy, 25, is a specialist enlisted at the 244th Engineers company under the 253rd Engineers Battalion, who was deployed to Afghanistan in January.

The boxes, filled with a variety of supplies like deodorant, gum, disposable razors, hot chocolate, Pop Tarts, Girl Scout cookies, Boy Scout popcorn, instant oatmeal, canned pasta and Fisher’s popcorn, will be sent to Kennedy who will then distribute the packages to his entire unit.

“The boxes are so important for us because they are a physical and tangible reminder of back home, and that there is light at the end of the tunnel,” Kennedy said. “Not every day is, ‘go, go, go,’ and [inactive periods] are often and routine nearly inescapable. The care packages are a little infusion of something different, which can be hard to find at times. They also let us know that people we may not be intimately familiar with have us in their thoughts.”

Kennedy is also a former employee of Frontier Town Western Theme Park, where he has played the deputy, a robber and other characters during his tenure at the amusement park.

“I truly enjoyed my time working there, being in the shows especially,” Kennedy said. “My favorite role was the town deputy, a role that many customers seemed to enjoy my portrayal of as well.”

His family wanted to send him and his unit some packages, and reached out to Operation We Care and the 4-H Club to provide those supplies.

The 4-H Club participated in the 25th annual packing party alongside volunteers from Operation We Care in Mardela Springs, Maryland, on Sunday, Nov. 17, where approximately 300 people packaged over 1,200 boxes in less than four hours. The packing party was invitation only.

“The 4-H Club has been working with Operation We Care for three years,” 4-H Club Co-Leader Kathy Decker said. “The whole idea of supporting the troops has just expanded into more than putting toiletries and Girl Scout cookies and what have you in these boxes to get to the deploy troops. That’s the main focus, of course, but it’s just expanded into so much more under Jeff [Merritt]’s leadership and Diana as well.

“Not everybody’s family can afford to send packages,” she added. “So this may be the only thing that they get to open at holiday time. For them to open that and see the pictures and the greetings, from the letters from the schoolchildren and the treats, necessities and toiletries, razors, toothpaste, toothbrush … all of that means a lot.”

Decker also knows Kennedy, which made this project extra special.

“I’ve known him since he was a young boy,” Decker said. “His family has been involved with Frontier Town’s Western Theme Park since nearly the beginning. [A friend] mentioned that Tyler was in Afghanistan and I said, ‘Well, my goodness, we’ve got to send him packages.’”

“We started 12 years ago in October of 2007,” Jeff Merritt said. “I just went to my wife and I said, ‘Hey, what do you think about packing care packages for the troops for Christmas?’ In November, we gathered about 15 of our friends to pack 65 boxes.”

Since its inception, Operation We Care has packed and shipped out over 18,000 boxes to troops deployed overseas.

Merritt realized the importance of sending packages to entire troops, not just a few individuals.

“When we get an address, we like to actually send packages to their entire unit because we’ve discovered over the years that an average of 12 percent is not receiving any mail at all,” Merritt said. “I [talked] to one of the soldiers that returned from his deployment to Kuwait … he said that he had guys in his unit that would order stuff for $5 from Amazon just so they could get a box in the mail.”

“When you are stationed or deployed somewhere around the world and you get a box from somebody that you don’t know it’s fairly emotional, as you can imagine,” he continued.

Operation We Care allows families to request packages be sent to their loved ones. Then, the entire unit is sent packages.

“For example, the parents might live in Ocean Pines, but their son is stationed in California and then he gets deployed,” Merritt said. “Then I find out the son has 68 Marines in his unit and we send all the packages to their son and he distributes them to everybody in his unit.”

Operation We Care packing parties take place twice a year, in May and November, though it will still send out packages to individuals if a family requests it.

The packages for Kennedy’s unit were processed on Monday and are expected to reach his unit within two weeks.

Kennedy expected to return from his deployment in early 2020.

“I would like to send a heartfelt thanks to the 4-H Club [and] Operation We Care, on behalf of both myself and my unit,” Kennedy said. “The 4-H Club is an excellent activity, allowing its members to experience responsibility and animal interactions, along with physical activity. It is wonderful that the 4-H Club exists to allow youth that experience and the positive personal growth their activities engender.”

For more information or to donate to Operation We Care, visit www.operationwecare.org.

Children ages 5 to 18 years old are invited to join the Worcester County 4-H Club, which is a development program and part of the College of Agriculture and Natural Resources out of the University of Maryland, College Park. To sign up, call the extension office in Snow Hill at 410-632-1972.

Partly cloudy skies during the morning hours will become overcast in the afternoon. High 47F. Winds NE at 5 to 10 mph.