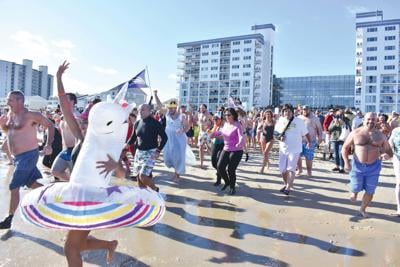 (Jan. 10, 2020) More than 700 men, women and children raced into the ocean to raise money for Atlantic General Hospital during the 26th annual Penguin Swim on New Year’s Day.

“It was a warm and wonderful day to hold our 26th annual Penguin Swim,” said Michael Franklin, president and CEO of Atlantic General Hospital. “It’s always great to join community members and visitors in supporting one of the most important assets in our community. The swim is a fun and unique way to kick off the new year.”

The penguins were joined on the beach on the sunny New Year’s Day by about 100 others, who gathered at Bull on the Beach bar and restaurant on 94th Street prior to the event.

At 1 p.m. they all rushed into the ocean at 91st Street. Most participants only got their feet wet, while several others completely submerged their bodies.

Plunging into the ocean has become a tradition for many penguins, including Jina Coffiey of Delaware, who has participated in the swim for over 15 years. This year she dressed up as one half of a pair of flip flops.

The fundraising goal this year was $80,000. As of earlier this week, about $89,063 (net) has been raised, but that number is expected to increase as donations are still being counted.

“It’s a huge success,” Atlantic General Hospital Event Coordinator Joy Stokes said. “I think that it’s just amazing for our community hospital to be [raising] this much money out of just jumping in the ocean.”

There were many interesting costumes and teams who participated this year, but according to Stokes, one of the few penguins who stuck out to her were the ones who got married right before the event.

“They got married right before, right outside of the gates on 93rd Street,” Stokes said. “They go to Bull on the Beach and so the Bull on the Beach parade became part of that wedding and then they ended up jumping in after.”

A primary sponsor of the Penguin Swim, Bull on the Beach on 94th and Second Street on the Boardwalk, has donated just over $630,000 over the past 25 years to Atlantic General Hospital.

Bull on the Beach had the distinction of ranking first place in the business category, raising almost $28,000 for Atlantic General Hospital this year.

In 25 years, the Penguin Swim has generated about $1.5 million for the hospital.

“It’s [amazing] starting 2020 off together, celebrating Atlantic General Hospital, celebrating a beautiful day in Ocean City,” Franklin said. “This event has raised over $1.5 million so far for Atlantic General Hospital in this community. We get people from all over the Mid-Atlantic states coming for this event and we appreciate what you’re doing to help this community.”

The Berlin hospital has been providing health care to residents of Worcester, Wicomico and Somerset counties, as well as Sussex County, Delaware, since May 1993. For more information about Atlantic General Hospital, visit www.atlanticgeneral.org.