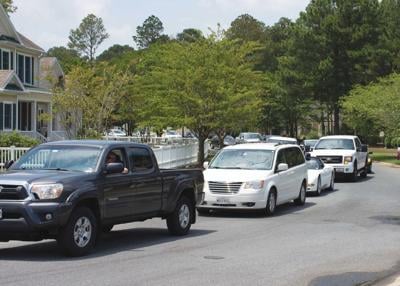 Charlie Dorman, past president with the Ocean City-Berlin Optimist Club, helped organize the gathering of law enforcement and military officials for his longtime friend, who is now in hospice care.

“He’s a retired police officer of 30 years from Anne Arundel County,’ she said. “I reached out and Sgt. George Coking called back and said they be honored to lead the procession down here, which they did.”

Coking took pole position on Monday and was the first vehicle to pull up to the Stansell House front porch to greet Juckett.

“He got out of the car with a mason jar with flowers,” she said. “He handed them to my husband and said, ‘these are very special and I picked these … from my garden to deliver to you.”

Juckett, a cold-war era U.S. Army veteran who served as military police from 1959-1962, was honored this year through the Ocean City Elks Lodge #2645 Hometown Heroes program.

Juckett’s Hometown Hero banner is currently flying on the Boardwalk near the Purple Moose Saloon on First Street.

“We had Army National Guard Major Gen. Janne Brickhead Morton there because he was in the army,” he said. “His picture is one of the ones hanging on the Boardwalk this summer.”

Dorman said Juckett, who retired in 1990, was an active member of the Ocean City-Berlin Optimist Club.

“He did everything with the Optimist Club,” he said. “Anything that they had to do … he was just that kind of guy.”

“You could count on him anytime for anything until he got where he couldn’t drive,” Dorman said.

“In the boat show, he was also the guy that took care of my hospitality room,” he said.

Close to 20 family members stood beside Juckett, who was wheeled out on the hospice front porch to welcome the crowd of well-wishers Monday afternoon.

Dottie Juckett said her husband was in good spirits during the ceremony and fully comprehended the wealth of glad tidings.

“Everybody in the cars was crying,” she said. “The whole thing was emotional, not just for me and my husband, everyone was very emotional.”