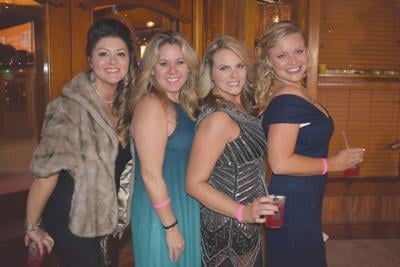 The eight-member prom court, which included three men and five women, collected over $183,000 to trump last year’s overall fundraising total of $127,000. The candidates raised funds by hosting events and raffles over the last few months.

Embers Restaurant Manager Rush Stehley was named prom king. He broke the fundraising record for a single prom candidate by bringing in $50,000.

“It was just an amazing experience. The whole night was just amazing,” Stehley said. “The whole thing has been just a rewarding experience, just to see the generosity of people for such a great cause. It just blew my mind the amount of support out there.”

Stehley was especially ecstatic about exceeding his personal goal of $35,000.

Beth Scaniffe of Whiskers Pub in Ocean Pines was awarded the title of prom queen for raising $32,402.

“I’m so excited,” Scaniffe said. “It was an awesome adventure. It was time consuming, but it was so well worth it for the kids. Our community jumped in and helped out when needed.

“Everybody did an awesome job,” she continued. “Whether you won or not, we raised a hell of a lot of money. I want to thank all my friends and family for getting me here, especially my dear friend, Tanya Knott. She worked so hard even when she didn’t have to.”

Both winners expressed interest in mentoring new prom court candidates in the future.

Wayne Littleton, coordinator for the Believe in Tomorrow Children’s Foundation Beach Respite Housing Program, thought the entire event was a huge success, despite not reaching his lofty goal of $200,000. The event had 310 guests attending.

“I always have high expectations, but the court did a wonderful job as usual, and they worked very hard and we’re very happy,” Littleton said. “I think one of the best things we’ve done is different events have been created and they’re being passed down every year. The creativity in the last couple of years has been unbelievable.

“It would be interesting to see if somebody breaks [Stehley’s] record next year,” he continued. “I just can’t thank everybody enough.”

All the funds raised from this year’s prom campaign will go toward the construction of the respite house on 65th Street, which is expected to be completed at the end of the year.

Believe in Tomorrow Children’s Foundation provides hospital and respite housing services to critically ill children and their families. Since 1982, Believe in Tomorrow has provided over 900,000 individual overnight accommodations, from every state in the U.S. and more than 82 countries worldwide.

Each of the four condos feature kid-friendly décor and paintings with at least two bedrooms, a full bathroom, a fully-stocked kitchen, living and dining room areas.

Families can also vacation at the Believe in Tomorrow House in Fenwick Island and House by the Bay on 28th Street.