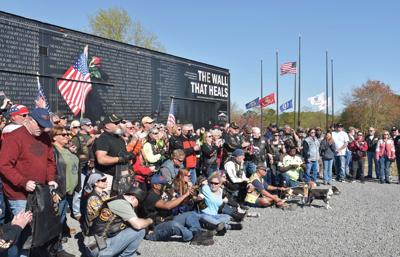 (April 23, 2021) Flag-waving crowds lined roadways in Ocean Pines on Tuesday afternoon to welcome the Vietnam War Memorial replica “Wall That Heals” for a stopover at the Worcester County Veterans Memorial.

Escorted by a squadron of law enforcement vehicles, motorcyclists and Corvette enthusiasts, the three-quarter-scale traveling replica of the Vietnam Memorial in Washington, D.C. arrived with a thunderous rumble after departing from Purdue Stadium in Salisbury just after 3 p.m.

The 50-plus foot tractor-trailer hauling the exhibit from North Carolina to Maryland lumbered up Route 589 to Cathell Road to roaring applause from an appreciative sunshine-drenched crowd.

At 375 feet long and bearing the names of 58,279 U.S. Armed Forces members who died during the Vietnam War, the display is the largest of three mobile reproductions of the D.C. memorial that were built in 1982 by the nonprofit Vietnam Veterans Memorial Fund.

“We figure about a couple hundred,” he said. “We actually had members of our foundation come from several different states and join in.”

Adkins said many Hogs and Heroes members are military veterans and value the importance of honoring past sacrifices made overseas.

“We completely stand to support our military, our veterans, law enforcement officers and all of the first responders,” he said.

After pulling into Ocean Pines on Tuesday, the exhibit was being assembled on Wednesday.

The Wall That Heals will be on view in Ocean Pines 24 hours a day through Sunday at 2 p.m.

To provide historical context, the Wall That Heals display also features an “Education Center” that includes a timeline of the Vietnam War with further details about the D.C. memorial.

Participants in today’s candlelight vigil will have the opportunity to peruse the wall as names of “hometown heroes” from Worcester County, as well as from other counties on the Eastern Shore of Maryland and Virginia, and Sussex County, Delaware.

Roughly 100 seats will be provided during the ceremonies, but audience members are encouraged to bring their own seats if possible.

Coronavirus protocols such as mask mandates and social distancing will be observed.

For more information on the Worcester County Veterans Memorial Foundation or the Wall That Heals exhibit, visit www.opvets.org.

For information on the Vietnam Veterans Memorial Fund, visit www.vvmf.org or call 202-393-0090.

The 50-plus foot tractor-trailer hauling the Wall That Heals makes a slow turn onto the lawn at Veterans Memorial Park in Ocean Pines on Tuesday.

Some clouds this evening will give way to mainly clear skies overnight. Low 51F. Winds NNW at 10 to 15 mph.

Some clouds this evening will give way to mainly clear skies overnight. Low 51F. Winds NNW at 10 to 15 mph.

Except for a few afternoon clouds, mainly sunny. High 64F. NNW winds shifting to ENE at 10 to 15 mph.