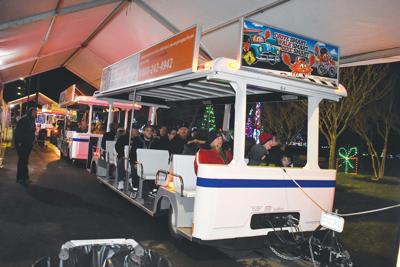 (Jan. 10, 2020) Despite running six less days than last year and several evenings of rain this season, over 103,000 passengers rode through the 26th annual Winterfest of Lights from Nov. 21 to Dec. 31 at Northside Park on 125th Street.

The 12-minute tram ride took guests through 58 acres of more than 400 displays of fairytale characters and holiday figures accompanied by festive music.

Even though the overall number is less than 2018’s, which saw more than 105,000 passengers, Special Events Superintendent Frank Miller believes this year was a great success, especially since the event was in operation six days less.

“Overall, we were very happy with the result of Winterfest this year,” he said. “We had a very strong turnout. Our numbers were strong for a shorter duration … we would have had a very strong year if we were looking at the same number of days for the event as last year.”

Attendance during the final weekend of the 26th annual event increased significantly compared to the last couple of years. There were three weekends in a row where the event saw well over 6,000 attendees, Miller said.

The busiest time was Thanksgiving weekend, Friday Nov. 29 to Sunday, Dec. 1, when more than 16,000 people took a ride on the tram.

However, more people are beginning to visit Winterfest during the weekdays as well, Miller said.

“There’s a trend that we’re starting to see where we have … very heavy crowd volume starting to appear on weekdays between Christmas and New Year’s as compared to just weekends,” he said. “A lot of the time it used to be weekends were very heavy. On weekdays, we could end up with a thousand people here, maybe two thousand there. Now, our numbers are up … even seeing 5,000 on a Friday night.

“I think people are starting to realize that this same experience can be had on a weekday as it can on a weekend,” Miller continued.

For the eighth year in a row, a fireworks display synchronized to music was set off at midnight on New Year’s Eve at Northside Park. It was well attended with 4,302 people riding the Winterfest Express and over 6,000 people coming out to join in the festivities, though the number might be slightly off with consideration of the attendees watching from Abbey Burger Bistro across the street, Miller said.

Inside the Winterfest pavilion, people enjoyed 3-D displays like the Park Place Jewelers Ring, where a few proposals took place this year, according to Miller.

“It seemed everybody enjoyed the normal traditional ride through the 58 acres of Northside Park and the 400-plus displays that we have,” Miller said. “And, they enjoyed the inside of the Winterfest pavilion because we did change up a number of things this year inside of there.”

More is expected to change for the 2020 Winterfest of Lights, as Miller and his team have already developed some ideas that could be incorporated into the event, including a day for guests’ pets.

“For 2020, we are looking at the option of adding a special day for our four-legged friends to come and enjoy Winterfest, and if we do that, it’s going to happen on the front end of Winterfest prior to the official opening day,” Miller said. “So, it’s a bit of a teaser that our dogs get to experience.”

More 3-D displays are also expected to be included in the 2020 Winterfest of Lights festivities as well. Other changes are expected as the year progresses.

“We’re looking to try to add some other new ascetics to the ride, like this year,” Miller said. “We’re now pulling the Jeep-based trams instead of the old trams. The new tram cars all had new sound systems in them, which enhanced the ride experience for all of our patrons. So hopefully, people noticed a difference there and enjoyed the music that we had put in it.”

Winterfest of Lights has a different layout each year to keep excursions fresh for returning visitors. Riders are challenged to find their favorite displays in new locations. The city’s crew began setup in early October to transform the park into a winter wonderland.

Mostly cloudy. A stray shower or thunderstorm is possible. High around 70F. Winds SSE at 10 to 15 mph.