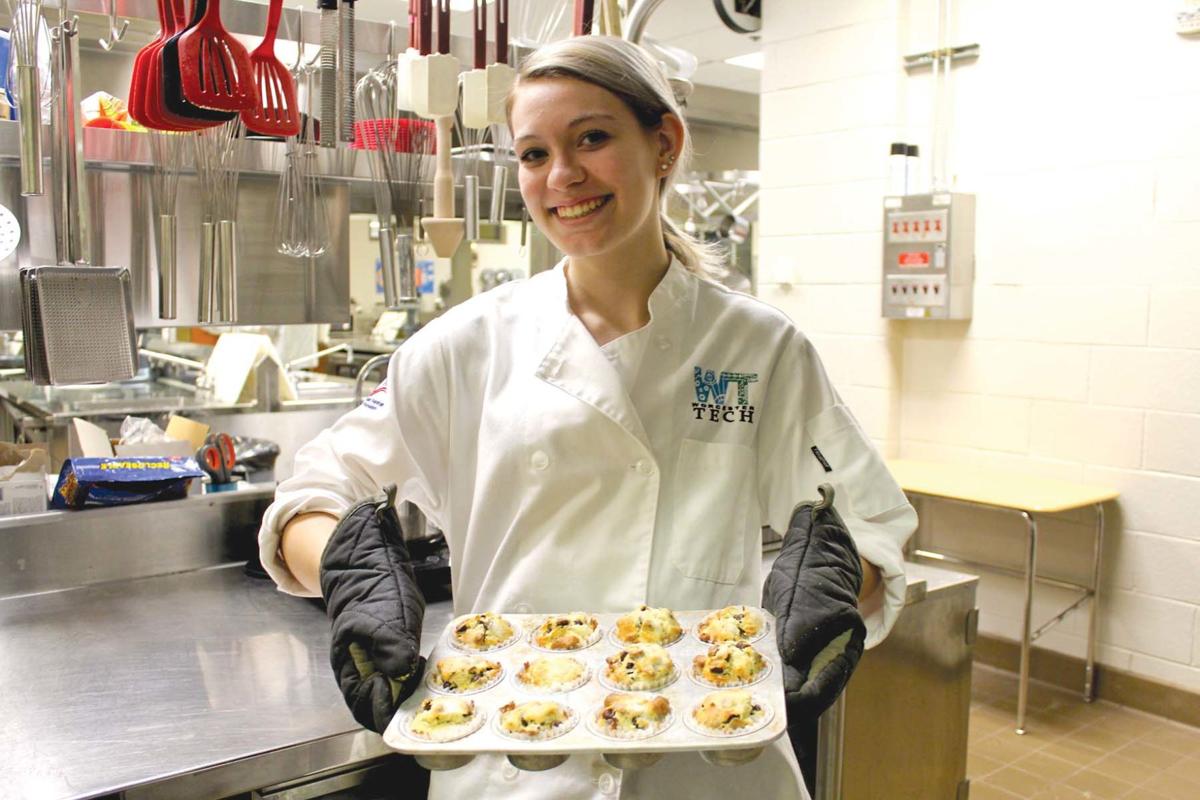 Anna Butler, a junior at Pocomoke High School, shows off the muffins she made during the baking and pastry class at Worcester Technical High School in Newark earlier this week. 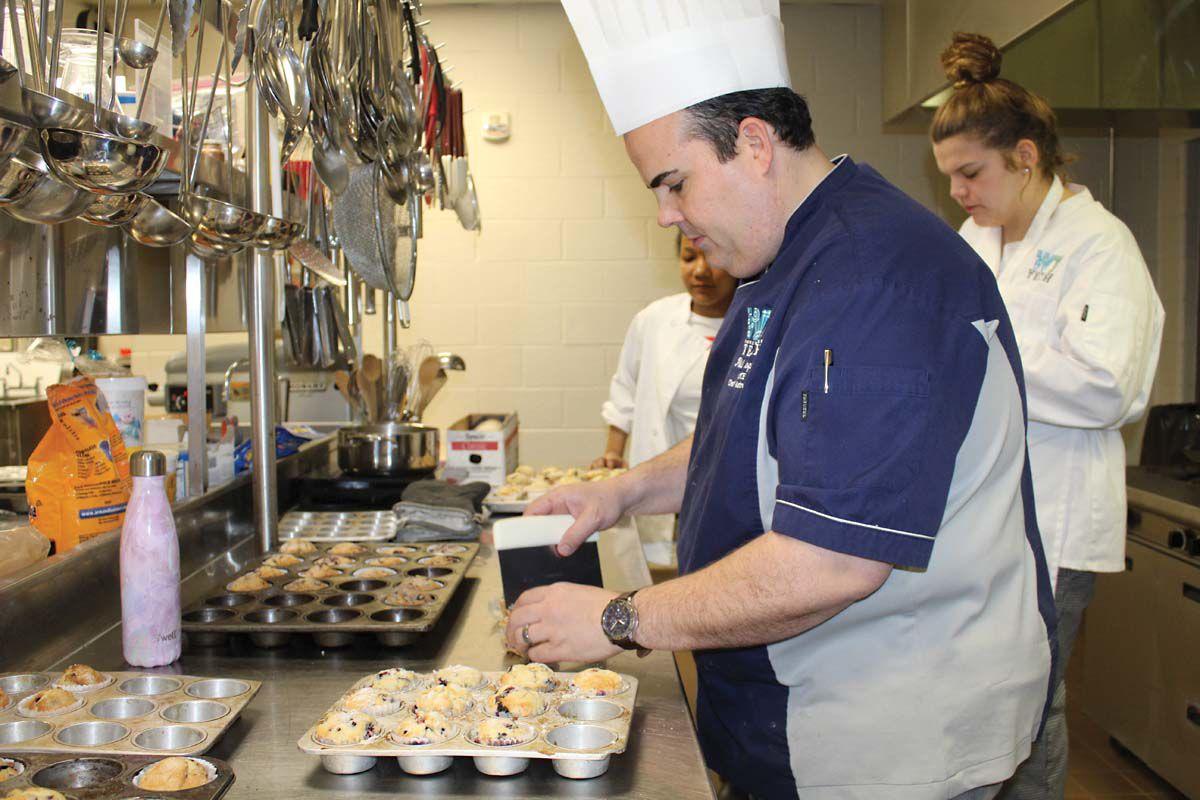 Phil Cropper, the culinary instructor at Worcester Technical High School in Newark, checks the muffins the students made during the baking and pastry class on Monday. 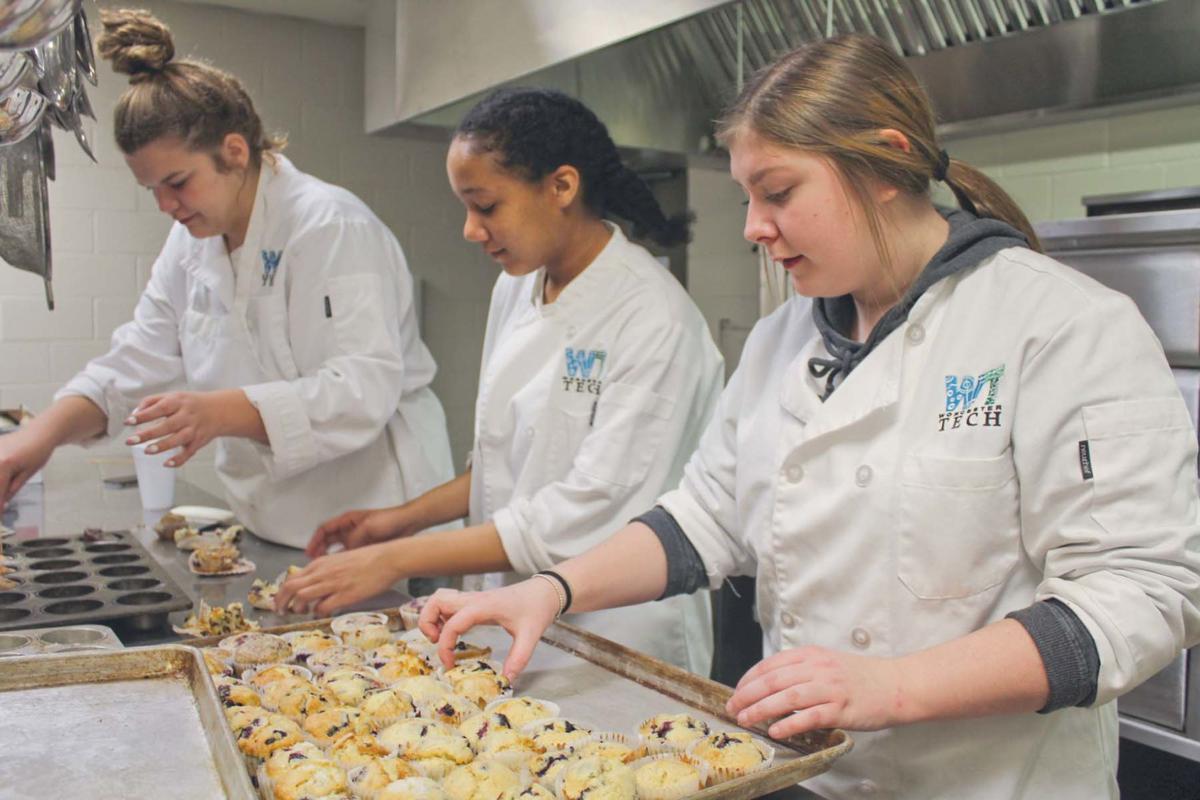 Cleaning up after baking muffins at Worcester Technical High School in Newark during their baking and pastry class, from left, are Isabella Holland, a junior at Pocomoke High School, and Brittany Bowen and Jacklyn Snyder, both seniors at Stephen Decatur.

(Feb. 28, 2020) In a $3.5 million kitchen, students at Worcester Technical High School in Newark have the opportunity to learn through accredited baking and pastry, and culinary arts programs.

The school got the new kitchen about 10 years ago, which has allowed students to learn more than just the basics.

Worcester’s culinary department only accepts high school juniors and seniors, who are taught the foundations of professional cooking during the first semester. They can then choose between culinary arts or baking and pastry for the second semester.

“It’s pretty great for the kids because they have this opportunity of earning the certification and getting the training in high school without having to technically go to college if they choose not to,” Cropper said. “They can go right into the industry and work or they can go to college and further their education. It gives them that choice.”

Because of recent changes, this is the first year that students automatically receive the certified title since Worcester’s program is accredited by the American Culinary Federation, according to Cropper.

In the past, students had to take a two-day practical test and a 380-question exam and pass with at least 75 percent.

“We are one of only three exemplar-rated American Culinary Federation programs in the state of Maryland,” Cropper said. “We get accredited every five years. We received the exemplar status, which is the top honor for culinary arts.”

Because the baking and pastry program is only two years old, it cannot receive exemplar status for another three years, but Cropper hopes it will. He said that both programs are a great first step for students.

“If they work hard in high school and get their certification, it’s a great stepping stone into a community college or a four-year university to study culinary arts,” Cropper said. “If a student’s not sure what they want to do and they’re enrolled in the program and they realize that they really like it, it’s a great stepping stone into the industry and they can get a job at one of the resort towns like Ocean City or Chincoteague.”

Cropper said about two or three students a year go on to a culinary arts school, which can cost up to $60,000.

The culinary program at Wor-Wic Community College in Salisbury is almost the same as Worcester Tech’s, but those students graduate with an Associate of Science degree. At Worcester Tech, students earn either fundamental cook or fundamental pastry cook certifications.

Most students go right to work on the Eastern Shore, according to Cropper.

“We have a couple kids in the program that work at Fager’s Island in Ocean City,” Cropper said. “The Harrison Group was just in here trying to recruit kids for the summer, so it really opens the door for opportunities for the students.”

He also mentioned one student works for the Atlantic Hotel in Berlin, and another for Coastal Coffee Roasting in West Ocean City. In addition, one graduate runs a gourmet donut shop in Washington state and another works for a restaurant in D.C.

Anna Butler, a junior at Pocomoke High School, said she wants to open her own organic bakery in Worcester County.

“I’ve always wanted to do this since I was young, but then also getting the experience before I go to college helps me prepare for college, so that I can be the best I can be,” Butler said.

She will be competing in the state SkillsUSA competition in Baltimore on April 17-18, which Butler said she is excited for.

“I’m going to be making scones for the state competition,” Butler said. “We’re going to be doing practices in class and I’ll come in after school and on weekends and work on my skills.”

She is considering attending Wor-Wic and then transferring to the University of Maryland Eastern Shore or attending the Restaurant School at Walnut Hill College in Philadelphia.

Khalil Suggs, a senior at Snow Hill High School, has already completed the culinary arts program and is now taking the baking and pastry class. He said he was fascinated by cooking as a kid.

“I would get bored in the house, so cooking was my outlet to do something,” Suggs said. “It stuck with me over the years.”

He is thinking about studying business at Wor-Wic and then transferring to another school. Suggs would like to stay in the culinary industry if possible and encourages others to try the culinary program.

“It’ll broaden your outlook on everything,” Suggs said. “Being able to work in a $3 million kitchen is pretty cool and being able to use different tools that you’ve never heard or seen before.”

The department will host a fundraiser at the school in Newark on Thursday, March 19, from 7-10 p.m. The students will transform the ballroom for a food and jazz gala dinner where they will create the menu, take the orders, cook and serve.

“I always do stuff to try to promote the program, give the kids different opportunities and bring in some income for the kids that need the extra assistance,” Cropper said.

The money raised will help the students with additional program costs. There are 100 tickets available for $45 each. Call 410-632-5050 for tickets.

This article is part of an ongoing series highlighting Worcester Technical High School programs. The school, located in Newark, Maryland, serves students in grades 9 through 12 enrolled in the three area high schools – Stephen Decatur, Pocomoke and Snow Hill. More than 20 programs are available for study.

The mission of Worcester Technical High School, “a progressive public secondary school which offers students the opportunity to prepare for both the world of work and post-secondary education, is to provide high quality career education and training programs through holistic teaching and learning.”