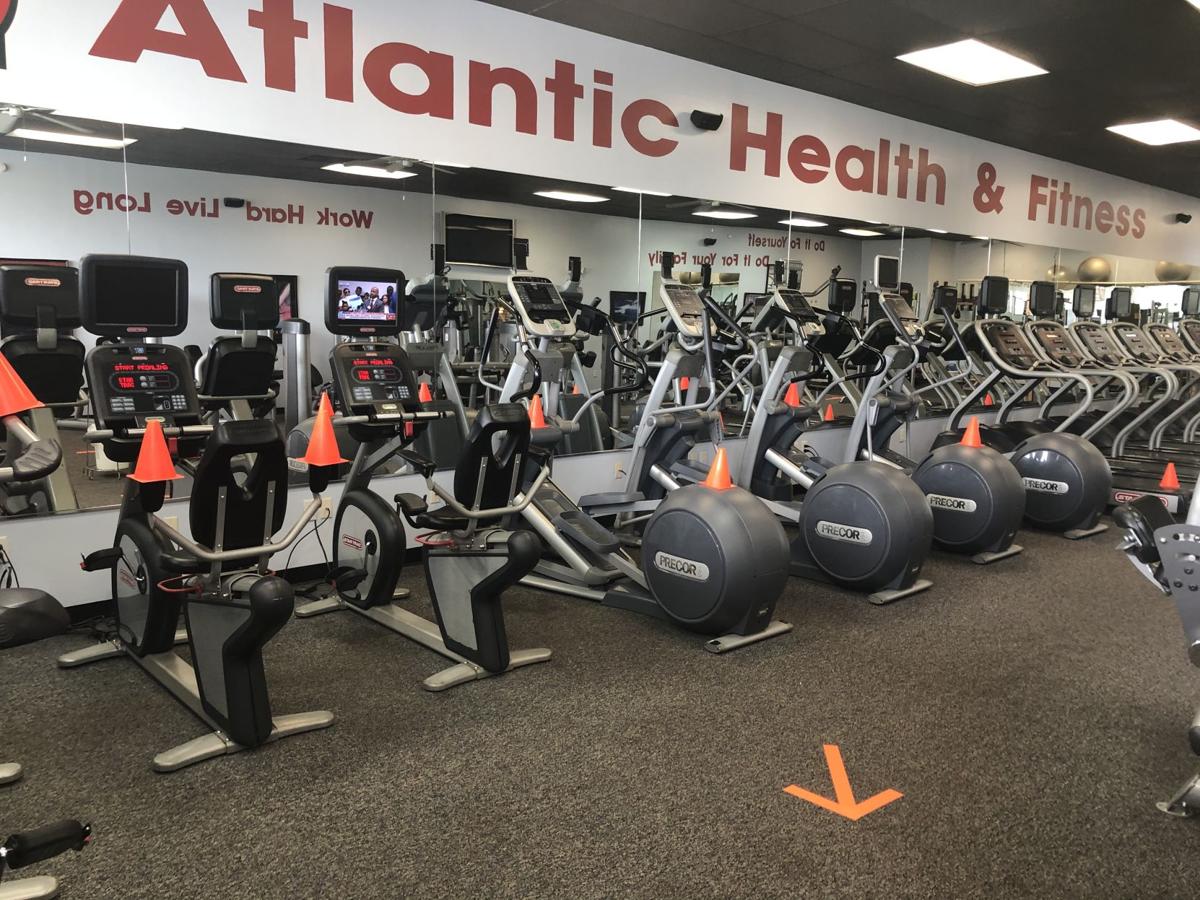 Atlantic Health and Fitness in Ocean Pines has sectioned off some machines to allow for guests to social distance. The gym has also added arrows to direct one flow of traffic. 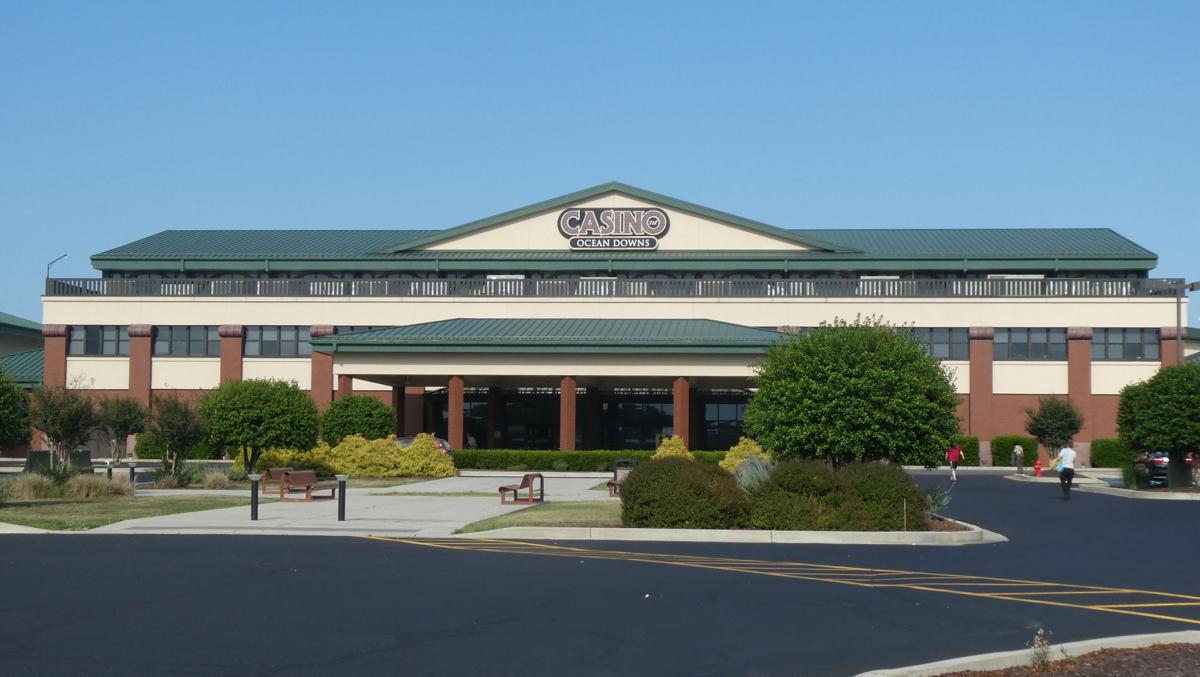 Ocean Downs Casino is operating at half capacity to help mitigate the spread of coronavirus. 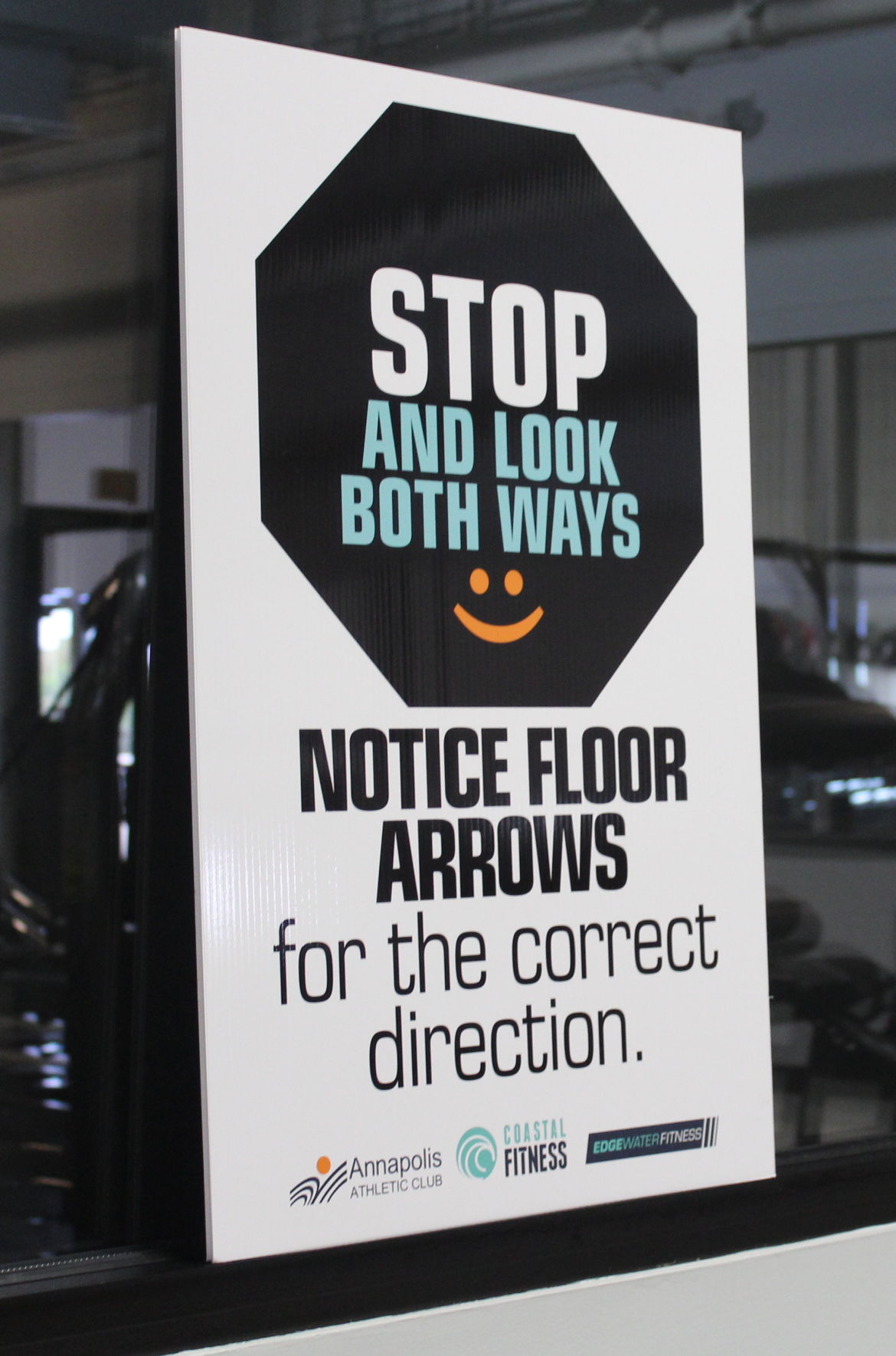 Coastal Fitness, on 115th Street, has posted several signs in the gym reminding members and guests of the proper safety guidelines. 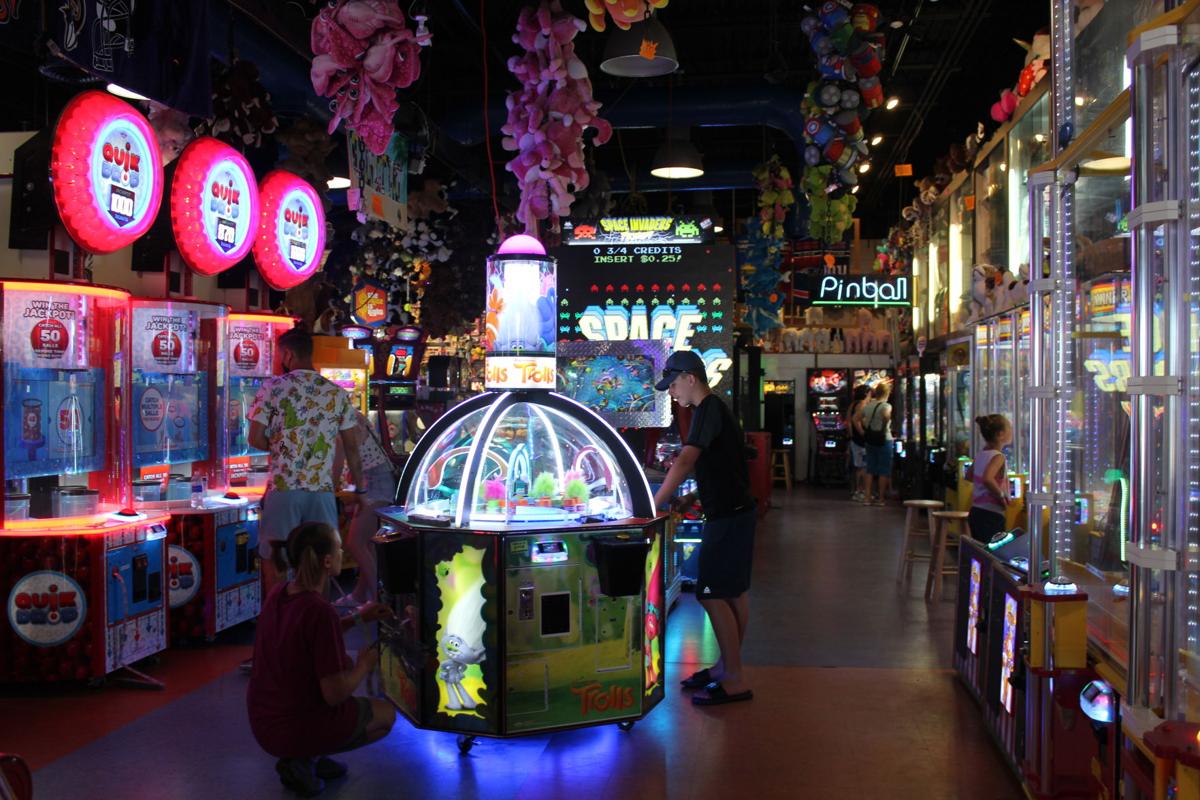 The Sportland arcade on the Boardwalk opened up last Friday at half capacity. 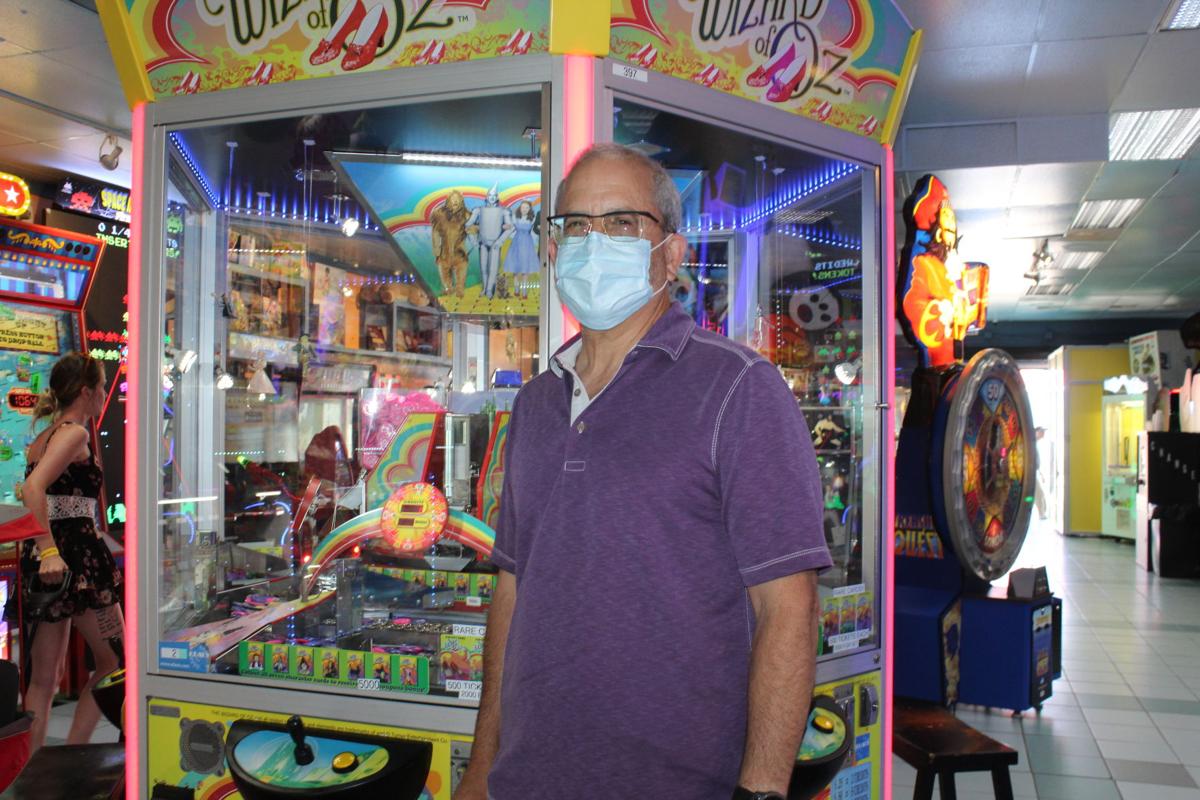 Jerry Greenspan, owner of Fun City and managing partner with Sportland, said that the arcades spray a “fog” to disinfect the area twice a day. 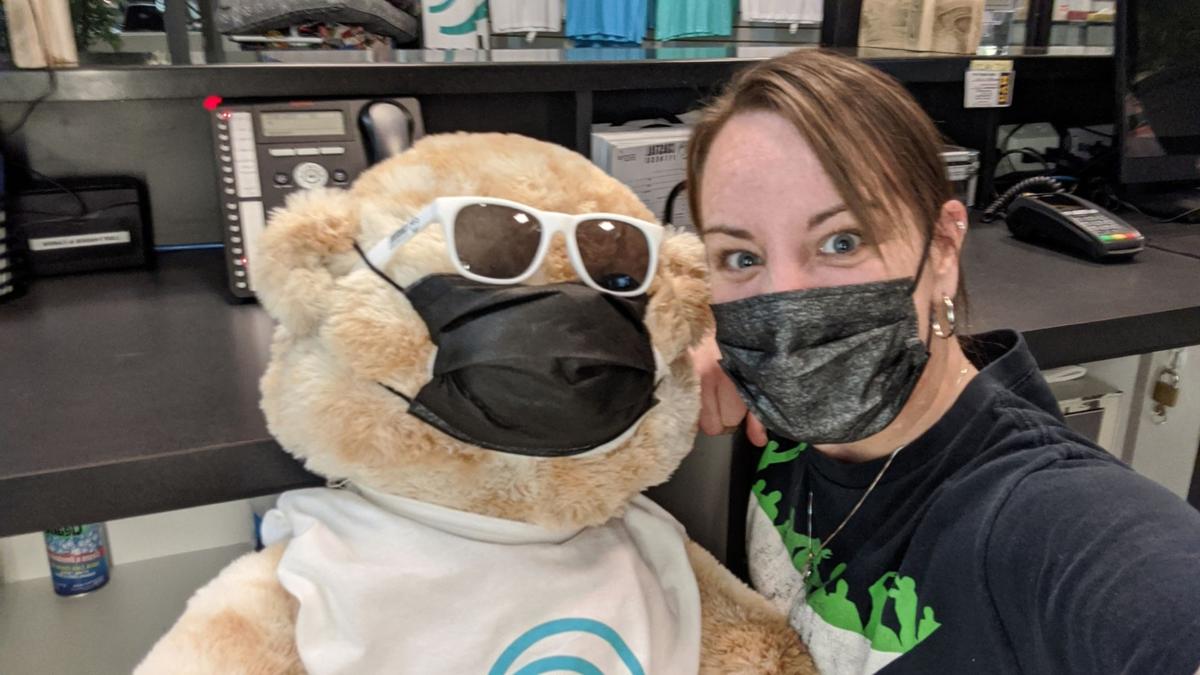 Jayna Griffith, manager of Coastal Fitness in the Gold Coast Mall on 115th Street, and Begz, the gym’s mascot, welcome guests back to the facility.

Atlantic Health and Fitness in Ocean Pines has sectioned off some machines to allow for guests to social distance. The gym has also added arrows to direct one flow of traffic.

Ocean Downs Casino is operating at half capacity to help mitigate the spread of coronavirus.

Coastal Fitness, on 115th Street, has posted several signs in the gym reminding members and guests of the proper safety guidelines.

The Sportland arcade on the Boardwalk opened up last Friday at half capacity.

Jerry Greenspan, owner of Fun City and managing partner with Sportland, said that the arcades spray a “fog” to disinfect the area twice a day.

Jayna Griffith, manager of Coastal Fitness in the Gold Coast Mall on 115th Street, and Begz, the gym’s mascot, welcome guests back to the facility.

(June 26, 2020) Arcades, gyms and casinos had a re-opening last weekend that was grand, considering those businesses had been closed since March because of the state’s covid-19 outbreak.

Jerry Greenspan, owner of Fun City and managing partner with Sportland, said that opening weekend went well, especially since the staff isn’t as seasoned. Part of this is because the Boardwalk arcades have no returning international student workers, whose J1 visas either weren’t or will not be processed because of federal mandates and a presidential directive.

“We have core managers, but we have a lot of new people working with us, which added a new stress level to the operation,” Greenspan said. “We had to do a lot of training within a one-day period because of not knowing when we were going to open.”

He said that it will take a few more weeks for the new technicians and redemption clerks to feel fully trained.

“We put up signs asking people to be patient and understand that we’re understaffed,” Greenspan said. “Most people were really nice this weekend.”

He explained that since the games hadn’t been on for months, they had some glitches that normally would’ve been caught by now.

Greenspan said the number of people in the arcades is less than last summer. He attributed a large part of that to the cancellations of nearly all summer events in Ocean City and at the convention center.

As for the visitors who did come, most of them were respectful of the social distancing and mask guidelines that are also observed by the staff, Greenspan said.

“All service techs and redemption people wear masks,” Greenspan said. “We have sneeze guards and constantly disinfect our hands, going around and disinfecting equipment, also fogging the arcade every morning before we open.”

The “fog” is a disinfectant spray to kill germs. It is sprayed twice a day in the arcade.

Coastal Fitness on 115th Street and Atlantic Health and Fitness Center in Ocean Pines took approaches similar to those employed by the arcades, posting signs to remind people to social distance, spacing out machines and constantly cleaning equipment.

“When a guest or member comes in, it’s very important for us to log their temperature and who came in at what time, so if anybody does come down with covid, we can trace exactly who was in the gym at that time,” Griffith said.

The gym is also asking guests to wipe down the machines before and after using them.

Gym goers can choose to wear a mask — Griffith said that most did not. The gym is also purchasing more touchless items, such as automatic hand sanitizer dispensers, and an air purifier that kills germs.

She added that opening on Saturday was stressful, as not everything went according to plan, but fun.

She said about 100 people came through on opening day.

“It was a normal Saturday in summer,” Griffith said. “The only difference I had seen is our older population members have been cancelling and not coming in.”

“They [clients] are issued a spray bottle and a cloth with disinfectant spray for any piece of equipment that they touch,” Cummings said. “We also have some equipment moved a little bit so that we are distanced. We also have a few items that are not in use.”

She added that although clients are required to wear masks when they enter the building and go to a machine, they can remove it for strenuous activity.

Owner Bobby Hammond said that the family-owned business had great cooperation from the clients.

“We make sure the clients know what is to be expected, so we can all return to normalcy in the best way possible and the safest way possible,” Hammond said. “If we have to remind someone or make sure everyone knows the rules, that’s how we reinforce that.”

For the first day, clients could only come in by appointment.

“We wanted to make sure that the way we were trying to operate with all these additional cleaning measures and sign-in measures that everything would work smoothly,” Cummings said.

The gym is operating at 50 percent capacity. Hammond estimated that about 30 percent of the normal clients returned to the gym last weekend.

He emphasized that the gym has a physical therapy clinic next door, which had remained open as an essential service.

“The gym is so important to them because coming from physical therapy, they’ve made the lifestyle change to continue to stay healthy, so it was a very positive thing to get back in the gym,” Hammond said.

As for Ocean Downs Casino, it is requiring employees and guests to undergo a temperature check and wear a mask inside. Bobbi Jones, director of marketing, said hand sanitizer is widely available and that staff is constantly cleaning.

“People get up after finishing a machine and move. We’re coming in behind them to clean the machines,” Jones said.

The normally 24-hour casino closes at 2 a.m. for cleaning and will open at 8 a.m.

“We’ve also put in social distancing for our tables, so there’s only three spots per table to make sure that everyone’s not sitting on top of each other,” Jones said. “We also have Plexiglass shields between a lot of machines to ensure that people can sit and play. We distanced the ones that we didn’t do a Plexiglass machine.”

Although there are normally 892 games in the casino, there are only 514 so the casino can keep capacity at 50 percent. Jones said the casino almost reached that capacity on Friday and did reach it on Saturday.

Overall, she said it was a great opening weekend and that patience was the biggest lesson, as not all operations went as fast as usual.

“For the most part, everyone’s been very respectful and very understanding,” Jones said. “I thought it was a great weekend as far as not just the associates getting acclimated to going back to work after a long time, but the guests were a lot more patient as well.”

She emphasized that all staff has been working together.

“Everybody’s been chipping in to make sure that we keep the property clean and keep our guests as well as our associates safe,” Jones said.