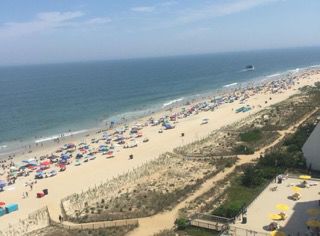 (Jan. 11, 2019) A disease that has killed more than seven horses on the Virginia end of Assateague Island could claim more victims if left unchecked.

The condition, known as “Swamp Cancer,” is also known by its scientific name, Pythiosis, which is a rare and deadly tropical disease caused by the aquatic microorganism oomycete Pythium insidiosum.

The organism was not discovered until 1987 and until that point, scientists believed the infections were being caused by a fungus. The disease it causes occurs most commonly in horses, dogs, and humans, with isolated cases in other large mammals.

Pythium insidiosum, when in water, results in the release of zoospores that are attracted to open cuts or sores of hosts. Once the spores find their way into a host, they cause Pythiosis.

Symptoms of Pythiosis in horses can include gastrointestinal distress, fever, vomiting and diarrhea. As conditions deteriorate, it can spread to lymph nodes and bones.

“As of right now I believe each case of swamp cancer has been isolated on the Chincoteague region of the island,” said Billy Weiland, communications manager for Assateague Coastal Trust. “This is likely because of the presence of more standing water in that section of the island. Further, this stuff spreads quick, and, though treating it is possible, early detection is critical. That said, it’s going to be tough to catch this because, as we know, the island’s herds are indeed wild.

“As for Assateague Coastal Trust’s role in this, for now I think the most important thing for our organization to do, for me to do as the communications director, is to make our public aware of this latest issue,” he continued.

Humans are not immune from the disease. Conditions brought on by pythiosis include arteritis, keratitis – inflamed eyes –, and periorbital cellulitis, an infection of the eye tissue. Severe cases can lead to a cornea transplant.

“Education is critical in any environmental issues,” Weiland said. “If people are aware of something and know a little bit about it, they will be more prepared to abate any adverse results.”

Pythiosis is heavily underdiagnosed due to unfamiliarity of the disease. Symptoms often occur once the disease has progressed to the point where treatments are less effective.

Most successful treatments include surgery, immunotherapy, and chemotherapy.

Environmentalists are encouraging hikers and other guests of the island to avoid marsh waters, particularly if they have any open sores.

“I suspect that this swamp cancer is probably, at some capacity, a result of warmer air and water temperatures that we’re seeing across the region as climate changes,” Weiland said. “So, I think those that are venturing out need to be aware, and should probably use precaution if they are moving through any kind of standing water that may exist in the marshier, swampier areas of our region. Something tells me that pythium insidiosum is not just confined to the southern portion of the island.”