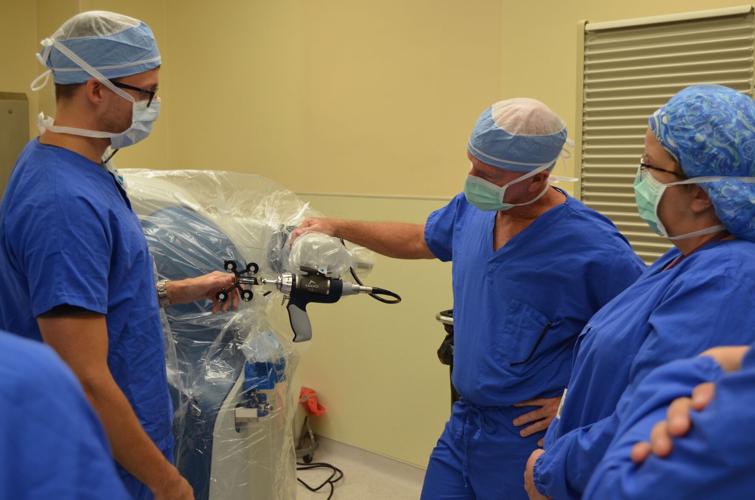 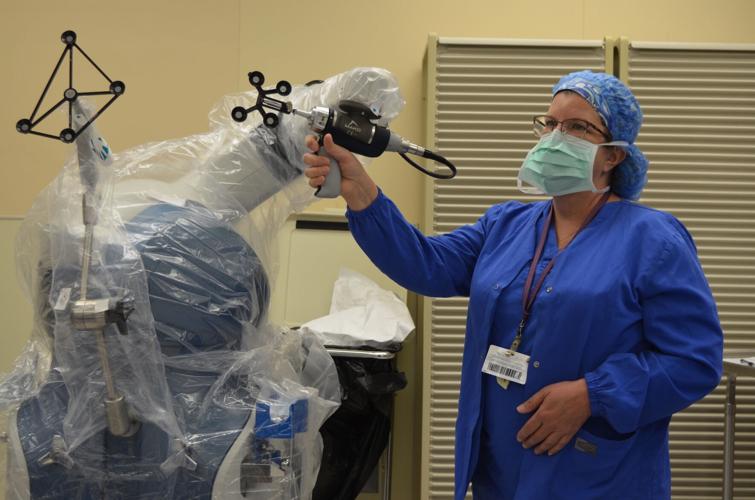 A member of the Atlantic General Hospital orthopedic surgery unit stands with the department’s new Mako robot Wednesday while performing in-service work on the device. The robot was recently received to help with hip and knee replacement surgeries.

A member of the Atlantic General Hospital orthopedic surgery unit stands with the department’s new Mako robot Wednesday while performing in-service work on the device. The robot was recently received to help with hip and knee replacement surgeries.

When some people hear the word “robot” they likely picture a rough, fictional, man-made version of a human created to provide companionship or perform work or chores, similar to Optimus Prime, Wall-E, or Rosie from The Jetsons.

But at the Atlantic General Hospital Orthopedic Surgery unit, the word means something else, something that has opened the door of a new realm of high-tech, top-notch care.

Standing a little shorter than the average person, the Mako robot, also known as the Mako robotic arm, is a square medical device with a robotic arm extension. It aids in providing high-level precision and accuracy during hip, knee and partial knee replacements. And as Farrell pointed out, it bears little to no resemblance to the Jetsons’ futuristic maid.

“It’s basically semi-autonomous,” Farrell said of the Mako. “Where Rosie is that autonomous one — you tell it go vacuum the kitchen, and she goes and vacuums the kitchen — we can’t tell the Mako, go do the total knee.”

The Mako robot is not a replacement for the surgeon, but a tool that helps them, Farrell continued. During a Mako procedure, the surgeon uses a CT scan to get a three-dimensional view of the joint and interacts with the robot to plan the cuts, as opposed to using a two-dimensional X-ray.

“The CT scan is really crucial because that’s how the robot really knows what it’s cutting and where things are,” Farrell explained.

From there, the surgeon does the cutting and the robot keeps the surgeon’s hand in line.

“That’s kind of how it works,” Farrell said. “It’s kind of like the robot, machine and man, working together. As opposed to some sort of artificial intelligence let loose on a patient. We all think of robots and we have all sorts of experiences and thoughts about them. And I think that’s probably a good way to understand it.”

The hospital recently bought the robot in an effort to step up its orthopedic surgery game.

“I think it’s an excellent tool and it certainly is helpful for us to have that available and I think in that regard makes us a place where we have more resources here to accommodate all the different patients that we have in our community with hip and knee ailments requiring these replacements,” Farrell said.

While the technology has been around since 2004, AGH’s Mako robot is new, and set to aid in its first surgery on Sept. 12. The robot is manufactured by the medical technology company Stryker, which bought it several years ago from Mako Surgical Corp.

Typically, the devices cost about $1 million

Farrell said he and fellow orthopedic surgeon Dr. Sean Hooker, along with other surgeons in the department who have received certification, can use the Mako.

“The company and manufacturer has every surgeon who’s interested in using it get certified,” Farrell explained.

The orthopedic surgery unit at Atlantic General already performs a “fair amount” of hip and knee replacements, Farrell said. With the Mako, those procedures will be taken up a notch.

“As far as I know, it’s the largest or most popular robotic orthopedic technology for hip and knee replacement in the world,” Farrell said of the Mako. “ … It’s not going to replace the surgeon, it’s not going to replace the training that is required to do this. But what it does is it allows … the surgeon to perform the surgery and plan it a little more accurately than traditional techniques. And the technology allows one to accurately, or more precisely, execute the planned surgery than with traditional techniques.”

This story appears in the Sept. 9, 2022 print edition of the OC Today.

Windy with morning showers evolving to a steady, soaking rain for the afternoon hours. High 67F. Winds ENE at 20 to 30 mph. Chance of rain 90%. Rainfall around a half an inch.

Thunderstorms likely in the morning. Then a chance of scattered thunderstorms in the afternoon. High 74F. Winds ESE at 10 to 15 mph. Chance of rain 80%. Locally heavy rainfall possible.