The Ocean City Board of Zoning Appeals approved measures last week that will allow the owner of Beach Barrels near 132nd Street on Coastal Highway to have a nearly 1,000-square-foot outside tiki bar in the front of the pub. 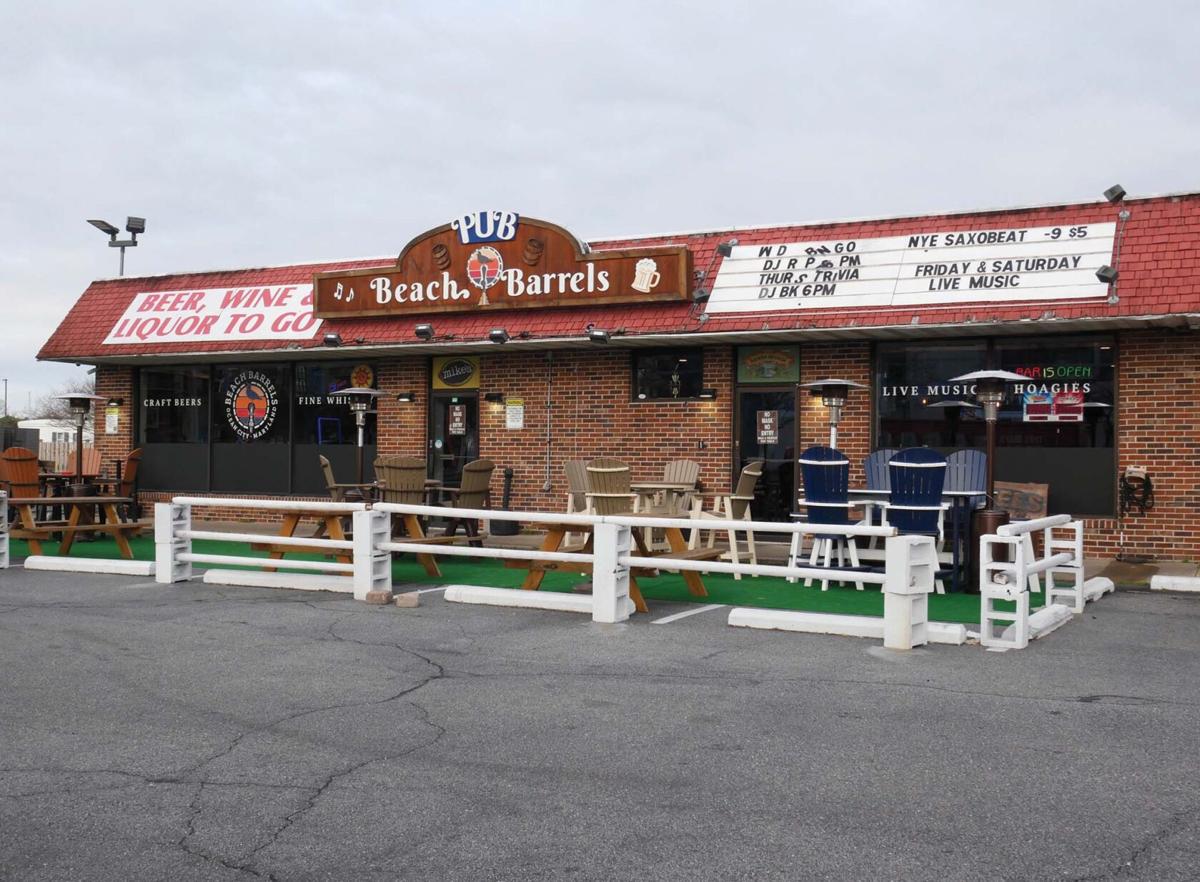 The Ocean City Board of Zoning Appeals approved measures last week that will allow the owner of Beach Barrels near 132nd Street on Coastal Highway to have a tiki bar.

The Ocean City Board of Zoning Appeals approved measures last week that will allow the owner of Beach Barrels near 132nd Street on Coastal Highway to have a nearly 1,000-square-foot outside tiki bar in the front of the pub.

The Ocean City Board of Zoning Appeals approved measures last week that will allow the owner of Beach Barrels near 132nd Street on Coastal Highway to have a tiki bar.

(April 2, 2021) A new precedence for restaurants was set last week after Beach Barrels in North Ocean City was granted approval by the Ocean City Board of Zoning Appeals to waive a seven-parking space requirement that it would have had to provide to construct a tiki bar.

Raymond McGrath, the owner of Beach Barrels at 132nd Street, sought permission to increase his overall occupancy level by building an open-air fenced-in space at the front of his establishment that can seat 32 people in a socially distanced atmosphere. The zoning code requires the space to have seven parking spots, but because parking is tight, he asked the requirement to be waived.

In an effort to help restaurants during the pandemic, Ocean City has allowed outdoor dining areas because of the open air and ability to socially distance. But now, as the pandemic begins to slow somewhat – and business owners start to notice the advantages to having these outdoor areas for patrons to dine – the city is beginning to entertain measures that make dining areas like this the new norm.

“There’s a lot of new precedence going on these days,” BZA Secretary Chris Rudolf said. “It’s just something we have to deal with.”

Zoning Administrator Karen Gordy told the three BZA members in attendance – Rudolf, Emily Nock, and Brooke McGrath – that restaurant owners have begun asking for outdoor areas that were allowed during the pandemic, to be permitted on a permanent basis.

She said in the case of Beach Barrels, the site plan that was presented to the town shows the proposed tiki bar on the Coastal Highway side of the establishment, and under the current code, they are required to have 57 parking spaces. At the moment, the establishment only has 39 spaces that are shared with other businesses that lease space in the strip mall.

Rene Mueller, the architect for Beach Barrels, presented the new plans for the establishment to the BZA during the meeting. The front glass to the south of the front door, he said, will be converted into garage doors to improve the flow.

The tiki bar will not have a bar, though. Instead, the decked area will include seats for 32 customers during the pandemic and 64 after.

McGrath said Beach Barrels has had four-piece rock bands play four days a week, until 1 a.m. Those days, he added, there were never any complaints.

The restrictions related to covid-19 – specifically closing times and occupancy – pandemic have forced McGrath to change his business model.

“Starting the entertainment a little earlier and ending it earlier has benefited [the business],” McGrath said, saying the music now stops at 11 p.m. instead of 1 a.m.

McGrath also said he has switched to having mostly trios, duos and solo artists performing at Beach Barrels.

And while complaints about noise and parking were expressed in letters to the BZA, neither have been an issue in the past, according to McGrath.

“I have not been approached by one person about parking,” he said. “We run a pretty tight ship.”

People are able to park in the neighboring Sunsations lot, McGrath said, and most of the Beach Barrels employees do not drive to work, and instead, either walk, ride their bikes, or take public transportation.

“We also have a very mature clientele,” he added, suggesting older people do not get as rowdy as younger patrons. “I’m probably the youngest person in there.”

Several people have expressed support and opposition to McGrath’s plans in writing, whether out of concerns for noise or for parking.

Gordy said at the time of the meeting that McGrath had collected more than 240 signatures from those who support his application.

Thomas Hannon, a resident of Ocean City, said he supported the changes taking place at Beach Barrels, saying, “What [McGrath’s] done there has just been unbelievable and safe.”

Laviola said he has lived in Ocean City for 25 years, and when the full season is upon the resort, the lot has at least 10-20 open spaces.

Barbara Charen, on the other hand, recently purchased a condominium in Excalibur – a complex across the street from Beach Barrels.

She said she was disappointed to find out, after buying the condo, that Beach Barrels wanted to open a tiki bar outside that included live music.

“This summer will be our first here,” Charen said. “I just can’t imagine that that side strip of public parking is not going to be more filled. The noise [and] the limited parking is a big concern.”

She said she chose to purchase a condo in the northern part of town because it is traditionally quieter, and she can sit outside on her balcony and hear the ocean – not bands.

“My fear is that’s all going to be gone,” Charen added.

In response to her concerns, McGrath said bands will not play outside, but instead, will only perform inside the establishment. He also said the garage doors will be closed.

Brooke McGrath said she did not see noise being too much of a concern since there have not been any noise complaints regarding Beach Barrels.

Where she was concerned, though, was with ADA compliance. She suggested approving the waiver of six parking spaces, instead of seven, and to create one ADA-compliant parking spot.

Ultimately, the three board members approved the application.

“I don’t see a reason to deny this in its current form,” Rudolf said.

Director of Planning and Community Development Bill Neville met with Ocean City Council on Tuesday to let them know that more places like Beach Barrels are starting to come forward, seeking to make temporary seating areas outside of their establishments permanent.

The council extended temporary permits for outdoor seating with the idea that they would be renewed from last year, when the pandemic began.

So far, places like Bad Monkey, Embers, Bayside Skillet and Beach Barrels have requested these areas be made permanent.

Additionally, Layton’s has asked to put picnic tables along the sidewalk, Neville said, and places like the Crawl Street Tavern and Bearded Clam want to be able to do the same.

Business owners in Ocean City and across Worcester County are seeing value in outdoor seating areas set up during the pandemic even as covid restrictions ease.

A steady rain early. Showers with perhaps a rumble of thunder developing in the afternoon. Storms may contain strong gusty winds. High 76F. Winds E at 10 to 15 mph. Chance of rain 80%.

Thunderstorms during the evening, then becoming clear overnight. Low 66F. Winds NNW at 5 to 10 mph. Chance of rain 70%.