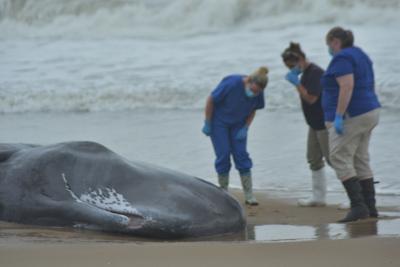 (Sept. 15, 2019) A juvenile sperm whale was pronounced dead six hours after it was discovered beached between High Point North and South condominiums between 114th and 112th Streets on Sunday.

The whale was first reported around 6:30 in the morning. While half submerged in the sand and high tide, the whale had weak but noticeable movements. Around 9:15-9:30, multiple civilians attempted to rescue the whale against the advice of the Ocean City Beach Patrol and Ocean City Police department who arrived at the scene hours earlier.

“It’s in a deep hole,” a bystander who attempted to save the whale said. “As the water moves it creates a hole just like when you put your feet in the sand and it buries your feet. If you don’t make a trough for the water that’s coming in … it won’t be able to move.”

Beach patrol, the Ocean City police and members of the Maryland State Police Department got involved, pushing concerned bystanders away from the whale.

Staff members and a veterinarian from the National Aquarium drove from Baltimore and arrived to the scene approximately around 12:55 p.m. and were able to confirm the whale’s death around 1:30 p.m.

“It appeared to be extremely underweight,” said Jennifer Reardon, public relations manager for the National Aquarium. “We are working with Ocean City Police and the Town of Ocean City to manage the scene and determine the proper path forward for this animal. We ask that any members of the public on the beach give the whale space and allow for our experts to further assess the animal’s condition.”

Approaching wild marine life on the beach is illegal as defined by the Marine Mammals Protection Act of 1972, which means it is not legal to approach, touch, harass or feed wild sea mammals. Marine mammals like seals, whales and otters carry infectious diseases that can be passed onto people, and vice versa.

If a whale or other marine animals are located on the beach, beachgoers are advised to not to approach the animal and to advise the beach patrol.

More information will be added as details come in.