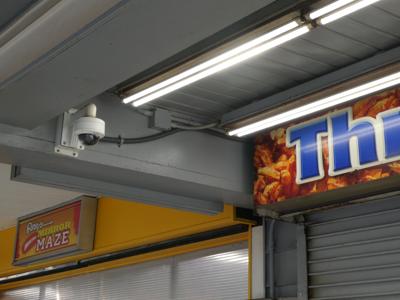 “Whether it’s before, during or after [a crime], the cameras have been very useful for us,” City Police Chief Ross Buzzuro said.

Since then, Buzzuro said the surveillance program has proved to be highly successful in enforcement efforts.

“It is a tool that is used on a daily basis,” Ashley Miller, Ocean City Police Department deputy communications manager, told Ocean City Today. “Our dispatchers watch the cameras, which allows them to dispatch the incident immediately instead of waiting on a concerned citizen, business or victim to call.”

Perhaps the program’s most notable achievement occurred in the summer when police used footage from the cameras to identify Harold Rafael Nunez-Dominguez, 19, of Harrisburg, Pennsylvania, who was accused of stabbing two teens on the Boardwalk on Sunday, June 9.

“From a technology and fiber [optic cable] standpoint, we have the ability to move forward,” Buzzuro said.

The cameras are state-of-the-art technology, Buzzuro said, and allow users to see a panoramic view of the surrounding area.

Currently, the police department has 12 or 13 locations slated for future camera installation.

“Looking at previous crime statistics, these locations would be truly advantageous,” Buzzuro said.

While supporters point to instances of success, such as the June stabbing arrest, as evidence of the cameras’ usefulness as a public safety tool, critics — such as the American Civil Liberties Union (ACLU), privacy advocates and even police departments — have denounced those claims.

In 2015, Police Chief Jim Peschong of Lincoln, Nebraska, said the devices had done little to nothing in aiding his department’s efforts to reduce criminal activity, as reported by the Lincoln Journal Star.

“Those evaluations outlined numerous problems caused by the cameras,” said Sonia Roubini of the American Civil Liberties Union. “They pose a heavy financial burden on police departments and cities, produce no positive effect on attempts to mitigate crime, aid practices of discriminatory targeting and often displace crime to unsurveilled areas.”

A more recent study, conducted by the University of Tennessee Municipal Technical Advisory Service Institute for Public Service in 2017, found surveillance cameras are most effective when combined with other crime reducing methods.

Such methods include improved lighting, security guards and defensible space.

While the civil liberties union criticized the Lincoln Police Department, the group also encouraged other agencies to follow in its footsteps.

“Every agency adopting a new surveillance technology should build in a process to evaluate its effectiveness,” Roubini said. “This will ensure that the agency and the public alike can understand whether they’re getting reasonable returns on both their investment and their privacy sacrifice.”

Regardless of the pros and cons, the expansion is favored by city officials, with Councilman Lloyd Martin saying the more eyes the city has, the better.

“This is the way to the future and we have to be proactive and I think we should support this request,” Meehan said.