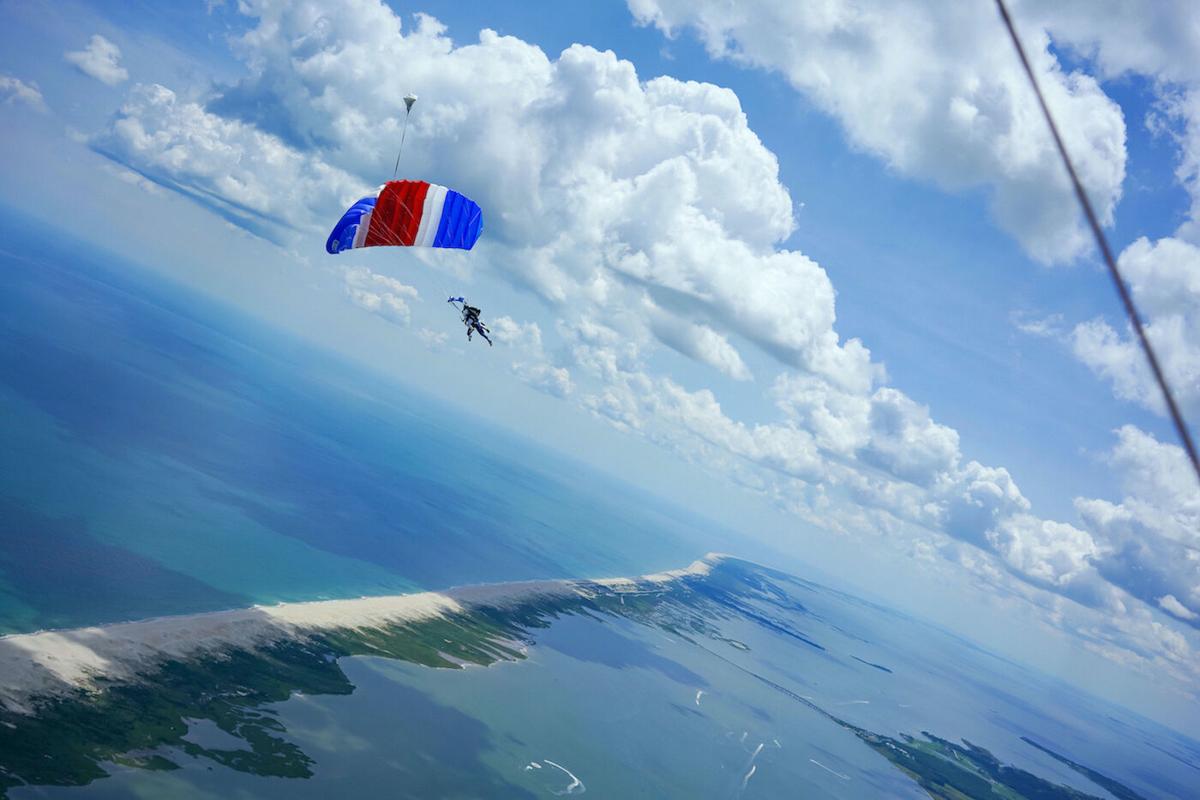 A skydiver from Skydive OC is shown flying above the resort skyline. Pres. Joe Biden traveled this week for the first time to his Rehoboth Beach-area home by air, thus grounding all skydiving operations for the duration of his visit. 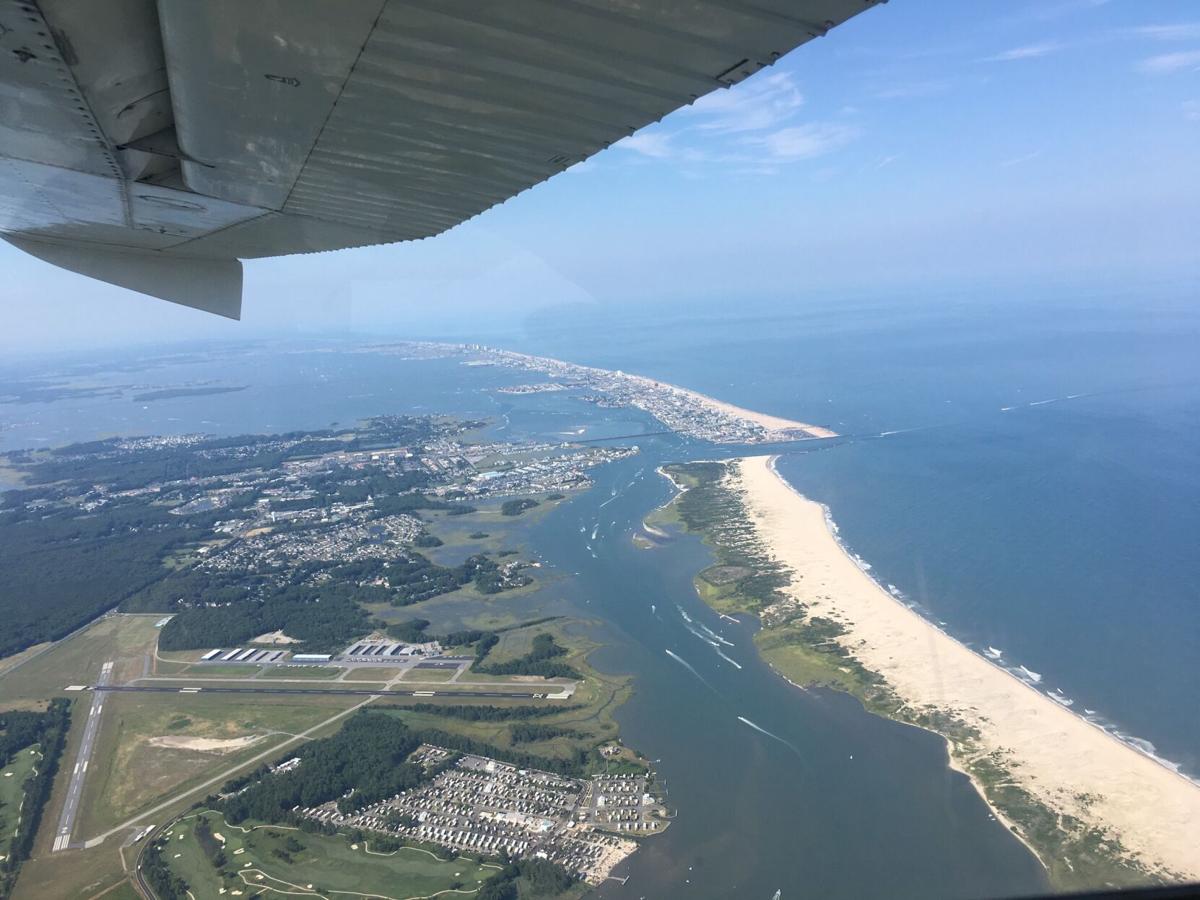 A skydive plane is shown flying above the resort skyline. Pres. Joe Biden traveled this week for the first time to his Rehoboth Beach-area home by air, thus grounding all skydiving operations for the duration of his visit.

A skydiver from Skydive OC is shown flying above the resort skyline. Pres. Joe Biden traveled this week for the first time to his Rehoboth Beach-area home by air, thus grounding all skydiving operations for the duration of his visit.

A skydive plane is shown flying above the resort skyline. Pres. Joe Biden traveled this week for the first time to his Rehoboth Beach-area home by air, thus grounding all skydiving operations for the duration of his visit.

Anyone who was planning to skydive Wednesday through Friday evening in Ocean City this week had to change their plans — and they have President Joe Biden to thank.

“Whenever the VIP TFR is active, skydiving is prohibited,” Skydive OC owner Jeanice Dolan said in reference to the Temporary Flight Restriction the federal government enacts for a 30-mile radius every time the president travels by air.

Biden was set to take his first trip since his inauguration to his Rehoboth Beach-area home Wednesday at 5:45 p.m., with his expected departure set for Friday, Dolan said. And because Skydive OC is on the edge of the TFR at the Ocean City Municipal Airport off Route 611, all of its flights are grounded for the duration of the visit.

“I still have not yet received any type of accommodations to be able to continue to operate while the TFR is active,” Dolan explained. “When I found out earlier this week, I had a couple of phone calls with the Secret Service and they were very responsive, but at this point there are no [exceptions] available to us.”

Overall, she said she had to cancel about eight scheduled skydive trips between Wednesday and Friday, which was not terrible. However she worries about the rest of the summer.

The trickle down effects are also concerning, as she cannot pay employees when she shuts down her business, and she hopes that there is some compensation available down the road if these situations keep happening.

“If we’re unable to operate from a business perceptive, and from the perspective of employees, we are looking for funding to assist us to keep our doors open,” she said.

Until this week, owners of air-based businesses in Ocean City were unsure of how the president’s trips to his Delaware beach house would affect their operations.

And for some, like Bob Bunting, who owns and operates Banner Planes and Red Biplane Sightseeing, it isn’t nearly as big of an interruption has he originally anticipated.

“I’ve been working loosely with the Secret Service for weeks and I’m permitted to fly,” he said of his banner, crop dusting and sightseeing planes. “I just have to follow the flight plans and I can’t fly in north Bethany through Rehoboth, but in Ocean City and lower Bethany, we’re fine.”

Bunting was initially frustrated with the lack of communication from federal officials and concerned about what the TFR could mean for his business, but as long as he files flight plans and sticks to them, he is pretty much in the clear in most spots.

Unlike Dolan, who got a hard and fast no.

Airport Manager Jaime Giandomenico said stricter regulations are in place for skydivers, paragliders and drones because of the unpredictability of the operations.

“What they are looking for is a predictable thing,” he said. “I fundamentally disagree with the opinion, but that’s their conclusion for the time being. It’s not controllable or predictable the way an airplane would be.”

He added that the planes that drop the skydivers also hover around the air within the TFR, which is also a cause for concern.

Outside of that, he said most planes can operate as usual as long as they follow the specific flight plans and stay in contact with airport officials.

“Our staff, to everybody that flies in, asks if they are familiar with [the TFR],” Giandomenico explained. “Our job is outreach and coordination to make sure nobody gets the fighter jet treatment.”

According to an article in the Cape Gazette in Lewes, Delaware, the president is traveling to his beach house in North Shores — a community between Rehoboth Beach and Gordons Pond — to celebrate his wife’s 70th birthday on Thursday. He bought the home during the summer of 2017 and has not been there since New Year’s Eve, the Cape Gazette reported.

This story appeared in the printed version of Ocean City Today on June 4, 2021.