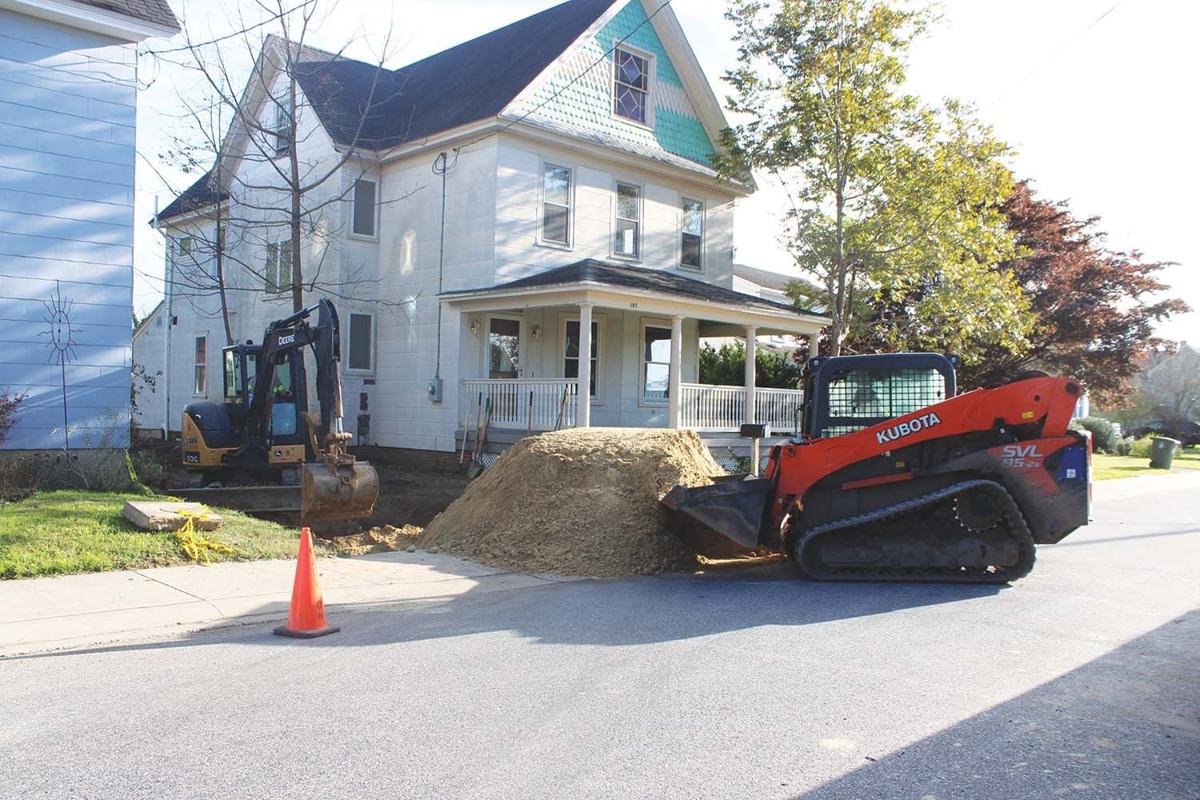 Chesapeake Environ- mental Services clean up an oil spill on the driveway of 105 West Street in Berlin that occurred on Oct. 30. 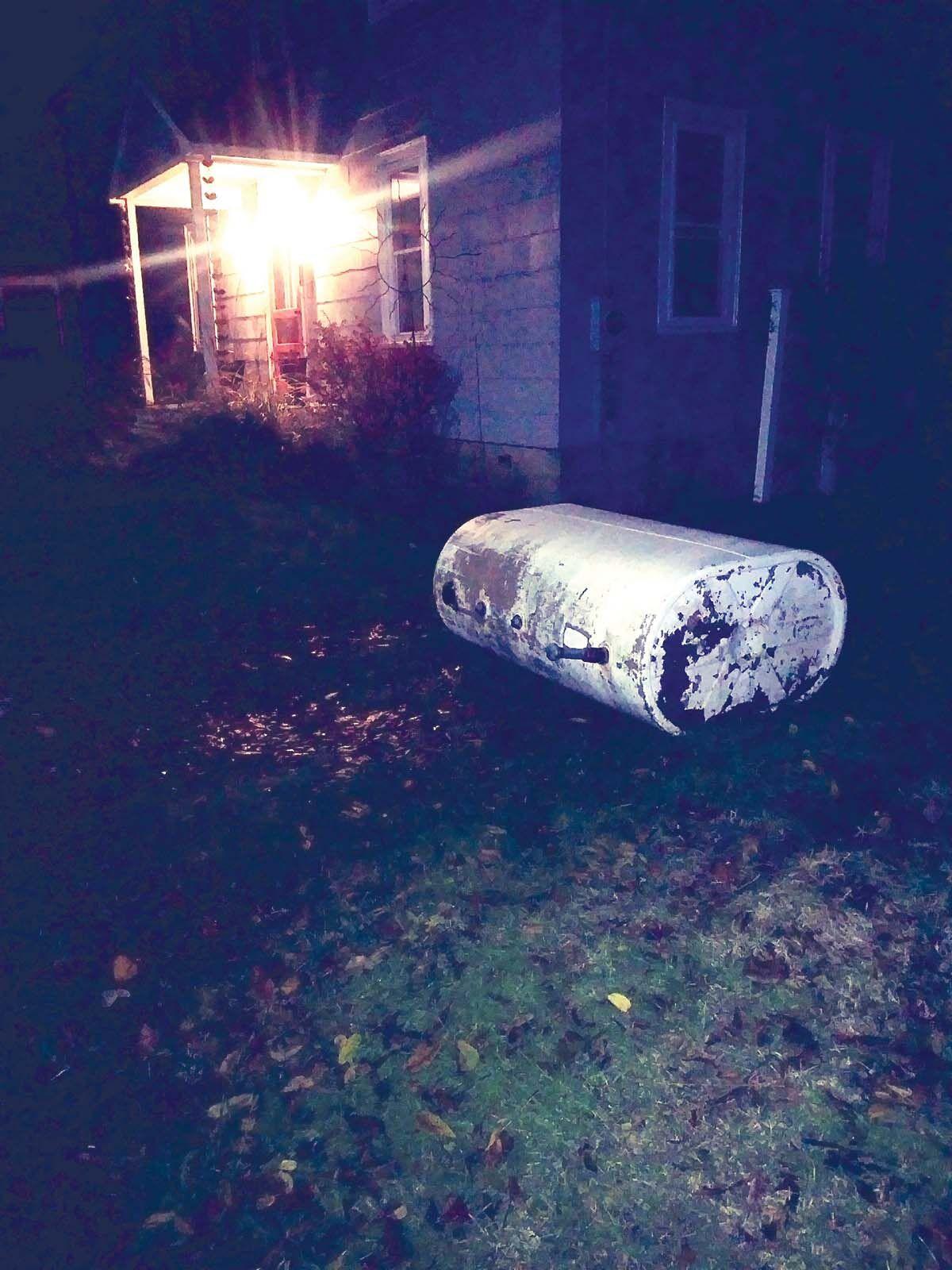 Brad Conlan, the homeowner of 105 West Street, ar- rived home on Oct. 30 to discover a heating oil tank tipped on its side in his driveway after someone al- legedly tried to re- move it from his neighbor’s property, 107 West Street.

JeriLyn Holston Andrews, the homeowner of 107 West Street, said the house has been a rental property for nearly a decade.

Andrews added that the heating oil tank was not used because the house has an HVAC system.

“We didn’t want the tank, so someone was interested in taking it,” she said.

The 2,440 square-foot property is currently on the market and is listed by Alexander Piela at Berkshire Hathaway HomeServices’ Ocean City office. The two-bedroom, two-bathroom Victorian home is for sale for $452,000.

Piela said he had spoken to several people who expressed interest in taking the oil tank. He planned to be at the property with the buyer of the tank for its removal. However, Piela is not sure who attempted to move the tank on Oct. 30 because he was never consulted.

Brad Conlan, the homeowner next door, said a police officer noticed the handle on the tank had broken on the side of the tank.

The individuals who attempted to take the oil tank and caused the spill have not been identified.

“I’m not a happy camper ’cause it’s costing me a lot of money, and I didn’t cause it,” Andrews said.

She and her husband are not taking any legal action at this time.

Conlan said when he arrived home on Oct. 30 about 7 p.m., he saw the oil tank laying on its side in his driveway.

“It was approximately half full of oil still,” Conlan said.

“They came out and drilled a hole in the side of the tank, pumped out approximately a hundred gallons of oil into barrels,” Conlan said.

Andrews and her husband live in Ocean City and were notified by the police late in the evening on Oct. 30 of the oil spill on the property. Her husband then went to West Street in Berlin.

Worcester County Emergency Services called Chesapeake Environmental Services that night and they came to clean up the spill.

Chesapeake Environmental Services removed the empty oil tank and spread absorbent socks onto Conlan’s driveway and where the oil tank previously sat on the property of 107 West Street, then covered it with plastic, Conlan said.

“When somebody spilled the oil and they obviously just left it there, they at least put some kitty litter down on my driveway and in that area,” he added. “So, later in the evening when I was walking my dog, I noticed that there was kitty litter all around the storm drain.”

Oil went into the storm drain but has been extracted, Town Administrator Jeff Fleetwood said.

Fleetwood added that residue in the ditch that runs from West Street to Main Street is being soaked up with absorbent socks.

Conlan said a portion of his garden had to be dug out because there was oil in the soil.

“As of right now, Chesapeake Environmental [Services] has the topsoil back down. It is grass seeded, and I hope they are coming out today with some stone for the driveway,” Conlan said on Monday.

Last Wednesday, town officials posted on the Town of Berlin Maryland Facebook page, “A number of calls have come in regarding contractor activity on a private property on West Street. The town is aware of the activity and the contractor is performing the job for which they were hired appropriately. The contractor has been hired by the property owner and is not working for, nor at the request of, the Town of Berlin.”

David Banks, owner of Chesapeake Environmental Services, said remediation has continued since Oct. 30 and the environmental services is working under the guidance of the Maryland Department of the Environment.

“I’m very glad that the townspeople and the emergency services have really helped out,” Conlan said.