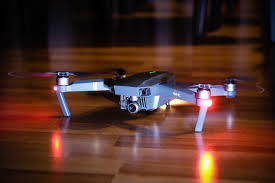 (March 27, 2020) Once life returns to normal and his schedule is not slammed dealing with the COVID-19 pandemic, Ocean City Emergency Services Director Joe Theobald hopes to continue development of a resort drone program.

“Over the years I’ve been monitoring other programs to see what direction they have been going, and quite frankly the technology has improved so much over the years, unmanned aircraft systems (UAS) is becoming a standard for public safety,” Theobald said.

Theobald said because Ocean City is the second most populated city in Maryland during the summer months he, the fire chiefs, the police chief and other department leaders agreed that drones would be essential, particularly during special events and mass gatherings.

“It gives us a view from the sky, not from the sidelines, to be able to see the big picture,” he said. “This gives us a whole different perspective for planning as well as modifying response plans on the fly if necessary.”

Additionally, the drones have thermal sensors, a spotlight and use GPS technology.

“It can be used for everything,” Theobald said. “Whether it be disaster response … [for] law enforcement it can be used for tactical situations, it’ll eventually be used for accident reconstruction on the highway … fire scene [overviews], hazmat situations, search and rescue — you just name it, [the uses] are endless.”

Theobald said procedures had been put in place to ensure deployment of the drones were approved by public safety leaders, and not just based on a whim by lower level employees.

“We want the command structures in all of the public safety disciplines to be involved in this and give the green light and OK that we’re going to put a drone up in the air. It’s not a decision that is made on the lower level,” Theobald said.

“I do envision the program to continue to build out, and in the coming years it may be commonplace to see an aircraft in the sky. We have to crawl before we walk. There are certain larger governments that deploy UAS 24 hours a day, but that’s a long way off.”

Once the drone program is refined, Theobald said his biggest priority would be to educate the public about it and keep the program as transparent as possible.

“Part of the program is certainly public education and outreach that will be included as we unveil the program,” Theobald said. “As I’ve said previously, this was developed with civil liberties and privacy in place. The public doesn’t have to worry — if they see an aircraft in the air it’s up there for a purpose.”

Foggy this morning followed by scattered showers and thunderstorms during the afternoon. Gusty winds and small hail are possible. High 63F. Winds SSE at 5 to 10 mph. Chance of rain 40%.

Sunshine along with some cloudy intervals. High near 65F. Winds W at 10 to 15 mph.