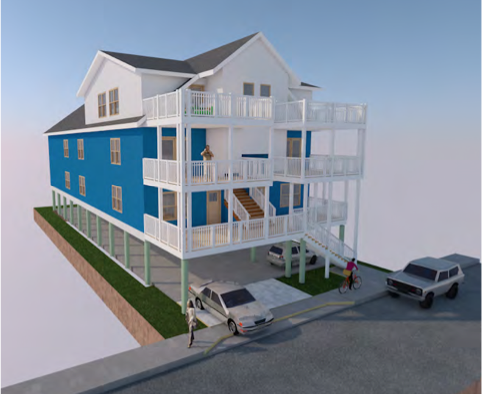 Some big changes are coming to a midtown Ocean City block.

On Sept. 8, members of the resort’s planning commission approved plans for a three-story multi-family condo building and some office space at separate spots on 57th Street.

The residential project, called 57th Street East Condominiums, is planned for 7 57th Street. It will include four condos with three bedrooms each and a design that Planning Director Bill Neville said is representative of “the structure we’re used to in Ocean City.”

The planning commissioners unanimously approved a site plan for the project with little to no discussion during their meeting on Sept. 8.

And just south of that, a 975 square-foot commercial project is planned for what is currently a banking drive-thru area under a building between 57th and 58th streets.

The site plan, which was also approved unanimously without drama, includes five parking spaces that will accommodate the new office.

According to the project details, the existing structure received approval in 1984 to become a commercial savings and loan, with construction completed in 1985. Today, it is a bank and office.

This story appears in the print version of the Ocean City Today on Sept. 17.

Rain showers in the morning will evolve into a more steady rain in the afternoon. High 44F. Winds N at 5 to 10 mph. Chance of rain 80%.