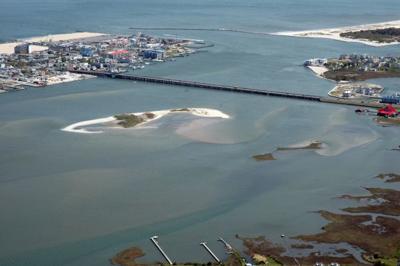 City sees no point in funding event not in resort boundaries

(Feb. 14, 2020) In a battle of Ocean City v. Worcester County, city officials on Tuesday approved the county Recreation and Parks Department’s request of $25,000 to secure the Great Inflatable Race obstacle course event with one condition: move it from West Ocean City to Ocean City proper.

The demand reflected the city’s age-old grudge against the county for seemingly leeching off the resort’s amenities.

As the name suggests, the Great Inflatable Race is a 1.5-2 mile inflatable obstacle course, and includes more than 14 giant inflatable structures for participants to climb on, bounce over and slide through.

Under the current proposal, the event would be held on the grounds of the Seaside Christian Academy in West Ocean City.

“Why would we fund this?” Councilman Matt James asked, adding that the resort stood to gain little from an event located outside its borders.

County Recreation and Parks Director Tom Perlozzo replied that it was his goal to garner more hotel stays in Ocean City.

“We felt like this particular event is certainly in the correct image and the correct demographics that Ocean City portrays, so it’s our efforts — Ocean City is in Worcester County last time I checked — to bring those kinds of events here,” Perlozzo said.

Perlozzo said he spoke with Susan Jones, Ocean City Hotel-Motel-Restaurant Association executive director, about creating special hotel-business packages. He also told the council that his department had considered holding the event on Ocean City’s beach, but that strong winds and sand could irritate and harm participants.

The next best thing, Perlozzo said, was to have the event as close to Ocean City as possible, within arm’s reach of the resort’s amenities.

That failed to satisfy council members.

“In your application to TAB (Tourism Advisory Board), and I quote, ‘With being held at Seaside Christian Academy, we anticipate people will gravitate toward adjacent shops and restaurants within the outlets and continue play at Baja Amusements,’ [you] kind of lost me there,” Councilman Dennis Dare said.

Perlozzo pointed to members of the business community who had expressed interest in working with the county on the race, such as Dean Langrall of Jolly Roger Amusements.

Tourism Advisory Board Chairman Steve Pastusak also mentioned the event’s brand power, with more than 80,000 likes on Facebook. He contended that securing the Great Inflatable Race would be another step toward making Ocean City a sports/outdoor activity destination.

“I’d like to add … after we have the race, we could certainly identify maybe the opportunity to come back into Ocean City,” Perlozzo said. “It is our intention not to come back before TAB. We’re looking at this as a self-sustaining event, but to get things off into the races, we reached out to TAB and said, ‘Look, we’re willing to take the $40,000 additional risk, if we can drive some business into Ocean City’.”

Dare and Councilwoman Mary Knight argued that the event would draw more participants if it were held on the beach, and that the sand was a non-issue.

Knight referenced the Spartan Race, which drew more than 3,500 participants to the resort.

“When I was at Spartan, everyone was so excited to be in Ocean City, and they beat their numbers being on the beach,” Knight said.

Only Councilman John Gehrig defended Perlozzo’s request, saying it was time for the city and county to overcome their differences and work together.

“At some point, I believe this body needs to get over ourselves, and our legacy mindset of city v. county,” he said. “We need to partner with the county, we need to build bridges with the county … We all win, we have to have confidence in ourselves that people will want to be in Ocean City.”

“I want you to know that when I go to an event to recruit these promoters to come to Ocean City, there are a lot of amenities inside corporate limits that are not available to bring someone in,” he said.

He recalled meeting with a lacrosse promoter who had 500 teams and who would book 14,000 room nights.

“We have the land, [but] they’re still going to stay in Ocean City because we have the beach. I just implore you to understand that there’s always two sides.”

Much is at stake, Perlozzo continued, if the two governments failed to set aside their conflicts.

“We had the opportunity to bring USA volleyball. Do I want to do that in Snow Hill? No. I have men’s and women’s volleyball that want to come here in August, Olympic year,” he said.

Perlozzo reminded the council that despite being a county employee, his work also benefited the resort.

“I think you really should do the event year one, if we make money you can have the money — we don’t need your money. I don’t see the risk … I’d be better off countywise putting them in hotel rooms in an  unincorporated town, but I want to put them on the beach, I want to put them here.”

Despite Perlozzo’s statement, the majority of the council remained adamant that the race had to be held in Ocean City.

There was also a spat between council members Mark Paddack and Gehrig, after the latter revealed his company, D3 Corp, would be aiding in booking hotels for participants.

Gehrig originally said he would abstain from the vote, but changed his mind and said he would vote and donate all revenue earned from the bookings to charity.

“Did I just hear you correctly [that you have a conflict of interest]?” Paddack asked. “We just sat here and had a conversation for 35 minutes, and now we’re finding out that you are conflicted, and you’ve been speaking, and you said you’re going to abstain and now you’re going to vote and say, ‘I’m going to give the money back to charity.’ That’s wrong. You say what we’re doing is wrong? That’s wrong.”

With the council not budging, Perlozzo said he would look into moving the event to Ocean City, which he said was possible with the funding somewhat secured.

“We have a conference call set up today with the promoter … [and] we’ll know in a week,” Perlozzo told Ocean City Today.