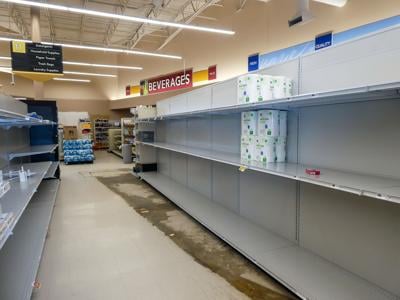 All shopping malls and entertainment shops are required to close.

No more than 10 people in a space.

Restaurants and bars are allowed to do takeout and delivery of alcohol products, and trucks may exceed weight limits in order to transport necessary supplies.

BWI airport will be restricted to ticketed passengers and badged employees only.

In one day, Ocean City goes quiet, too quiet

(March 20, 2020) A series of state executive orders issued Monday morning to combat the spread of COVID-19 is leaving local businesses and their representatives scrambling to mitigate economic fallout.

In a press conference Monday, Gov. Larry Hogan announced that all bars, restaurants, movie theaters, fitness centers and spas across the state must close and remain closed indefinitely.

Hogan also amended a previous prohibition on mass gatherings, reducing it from 250 or more people, to more than 50 people on Tuesday, and this encompasses all social, community, spiritual, religious, recreational, leisure and sports events.

Next month’s primary election has also been postponed until June 2, Hogan declared on Tuesday, and the 7th Congressional District special general election will proceed with a vote-by-mail system.

There are exceptions to these prohibitions — restaurants may continue carryout, drive-thru and delivery services; health care facility eateries may remain open; and essential service providers, such as grocery stores, gas stations, banks and food delivery services are exempt.

The city announced on Tuesday that public access to City Hall would be severely limited, while the visitor center and Ocean City convention center on 40th Street were closed to the public.

The district courthouse is also closed to the public, but the police department will remain open and accessible.

“Unfortunately, far too many people have continued to ignore those warnings and are crowding into bars and restaurants, willingly putting the health and safety of others in danger,” Hogan said.

This was true in Ocean City last weekend, where, despite cancelations of St. Patrick’s Day events, local bars, restaurants and the Boardwalk were teeming with guests ignoring requests to practice social distancing.

Nonetheless, last weekend’s surge in revenue will be short lived, as public safety measures have caused a flood of event and hotel booking cancelations.

Those cancelations on top of the restaurant and bar closures, and the unemployment that is likely to follow, have already caused irreparable damage to the local economy, according to local business leaders.

Michael James, COO of Hospitality Partners and managing partner of the Carousel Group, said the gathering ban was devastating for the hotel industry, especially since April and May see many conferences and conventions.

“We had several cancelations,” James said. “People are postponing [events] until they know what’s going on, [and] booking has been much slower.”

“It’s called a rainy day fund and in about two weeks, it’s going to be raining harder than we have ever seen in the State of Maryland for these small businesses,” Franchot said in a press release Monday morning.

“I don’t want to hear that we cannot afford it,” he said. “In the years that I’ve served as your comptroller, I’ve seen our state and federal governments shovel cash to the big banks, to our automakers, to the airlines, to Amazon and to gambling casinos. You will never, ever convince me that we cannot and should not stand up now and make a life-altering investment in those local businesses.”

Franchot announced on Tuesday that the state would extend business-related tax filing deadlines to June 1.

“The June 1st extension applies to certain business returns with due dates during the months of March, April and May 2020 for businesses filing sales and use tax, withholding tax, and admissions and amusement tax, as well as alcohol, tobacco and motor fuel excise taxes, tire recycling fee and bay restoration fee returns.

Business taxpayers who file and pay by the extended due date will receive a waiver of interest and penalties,” Franchot said.

Additionally, the Maryland income tax deadline has been extended to July 15.

In addition, legislation headed for the governor’s office includes a measure that would extend temporary unemployment benefits to workers affected by COVID-19. It also would cut costs for screening tests, make telehealth services more accessible, prohibit price gouging and make it illegal for employers to fire an employee because he or she is quarantined.

Monday’s prohibitions also came with protections that prevent utility companies from shutting off any residential services or charging late fees, and that stops landlords from evicting tenants.

Locally, the Ocean City Chamber of Commerce collected names of businesses that have had a substantial negative economic impact because of the pandemic, and sent it to the Department of Commerce as part of the States Economic Injury Declaration on Wednesday, according to CEO and President Melanie Pursel.

“We have also been assisting with the collection and dissemination of food and items for the children that are not in school during this crisis, as well as families that have lost their jobs due to the restaurant closure” she said.  “Many businesses and restaurants are making donations to that, as well, even as they are suffering such economic impact.”

For students in need of a meal, visit https://mars.msde.maryland.gov/ mars_sitesearch/ . For a list of local restaurants offering carry-out services visit https://www.facebook.com/ ochmra/.