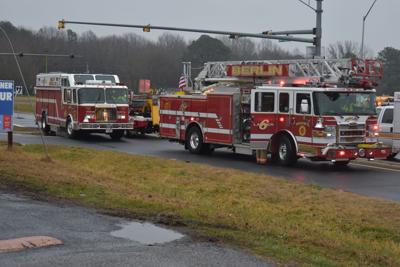 Fatal vehicle collision at intersection of 818, 113

(Feb. 7, 2020) The driver of a 2000 S10 Chevy pickup was killed in a two-vehicle crash in Berlin around 7 a.m. Thursday, when the pickup collided with a large rollback truck at the intersection of Routes 113 and 818 just south of town.

The deceased was identified as Johnie Derrickson of Parsonsburg, 73. The other vehicle, a 2017 Freightliner rollback tow truck, which was traveling south on Route 113 was driven by Robert Kressman, 58, of New York.  Kressman was not injured in the collision and refused medical treatment at the scene.

The Berlin Police Department, along with assistance from the Worcester County Sheriff’s office, Maryland State Police, Berlin Fire Company, Office of the Fire Marshal, State Highway Association and Commercial Vehicle Department and the Medical Examiner’s office were on the scene, closing off southbound Worcester Highway during the accident.

The highway was closed for approximately four and half hours.

Accident reconstruction took place immediately. The cause of the collision is still being investigated by the Berlin Police Department with the assistance of the Maryland State Police Commercial Vehicle Enforcement Division, and the Worcester County Sheriff’s Department.