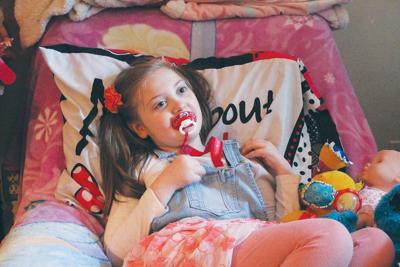 (March 15, 2019) The Martin family, of Ocean City, has had a tough few years, but the advent of medical marijuana has made at least one aspect of their lives a little easier.

Buddy and Rachel Martin have a family with six children, one of whom, their 9-year-old daughter Shelby, has the genetic condition, Rett Syndrome.

“What Shelby has is really about the worst thing a kid could have period,” said 38-year-old Buddy.

“She can’t speak. She can’t walk. She has very little use of her hands. Eating is a problem. Swallowing is a problem,” he said. “Constant constipation is a problem, like bad enough where they can actually like rupture their intestines.”

In addition to those difficulties, epilepsy is a concern with Rett Syndrome,  Shelby experiences as many as 30 and 40 seizures a day, Buddy said. He added when she’s been tested in hospitals overnight, it’s been constant.

“The biggest thing for epilepsy is sleep, and for her being up every hour, or two every single night of her life, she never gets the amount of rest that she needs so that just makes it worse,” he said.

Shelby sleeps in a hospital bed in her parent’s room, and they continued to watch over her.

“I mean we would before sleep in shifts,” Rachel said. “He’d go to bed at like 2 and I’d get up around 3 with her. And we’d done that for years. Just normal.”

Shelby is on two highly addictive seizure medications, one of which takes its toll on her organs.

“They just tear your body up. We’re not really designed to handle them long-term and to be on them every single day for several years and to be so little and have to fight for your life a few times a year is a lot,” Rachel said.

Even with that medication, however, the seizures can come on suddenly.

Then the Martins began speaking with hi Tide Dispensary co-owner Bob Davis about their options for Shelby after doing researching online. Davis said he met with the family last November, and the Martins picked up Shelby’s products not long thereafter.

Davis, who has been a pharmacist for more than 25 years, worked with the family to get her registered with the Maryland Medical Cannabis Commission, and to develop a treatment.

Davis said it involves a grapeseed oil based tincture administered from a dropper. It contains two compounds found in cannabis, CBD (Cannabidiol), which produces no “high,” and THC (tetrahydrocannabinol), which can generate a “high” in sufficients amounts. The ratio in the tincture, however, is 10 parts CBD to one part THC.

Davis said the ratios are typically higher in CBD, and it “stabilizes the nerve impulses … increasing the seizure threshold, meaning it’s harder for them to get to the point where you’re going to actively have a seizure.”

Shelby is a third grade student at Cedar Chapel Special School in Snow Hill, and uses a computer to communicate with her teachers, aides and fellow classmates.

Rachel added Shelby takes the cannabis with pharmaceutical drugs. Both parents have noticed a drastic reduction in her seizures and Buddy “think[s] she’s had four seizures in total” since starting the cannabis therapy.

“That doesn’t happen, you know what I mean? That just doesn’t for anybody for any reason,” Davis said. “It shouldn’t happen, it’s not normal for something to be that effective and then not to be toxic at the same time.”

Buddy and Rachel agreed that Shelby has become more alert, and cited instances when she held out her hands to others, which she hadn’t really done before.

“She was really proud of herself,” Rachel said. “She’s doing amazing.”

“We were all excited because she broke a bowl the other day because she tried to reach her own potato chips,” Buddy said.

Buddy also noted how her eyes have been more expressive.

Buddy and Rachel also said Shelby has been sleeping through the night since taking sleepytime, a combination of THC and CBN, which Davis said is a subset of CBD and helps sleep functions.

“She’s like 20 some days in a row now of sleeping through the whole night, which has never happened in her whole life,” Buddy said.

For the Martin family, they continue to treasure every moment of Shelby’s life.

“Rett [Syndrome] is a terminal diagnosis, so you never know how long you’re going to have with your daughter, so any day that she is happy is a good day for us,” he said.

“That also puts a lot less stress on the family,” Buddy said. “Less fighting or arguing over things.”