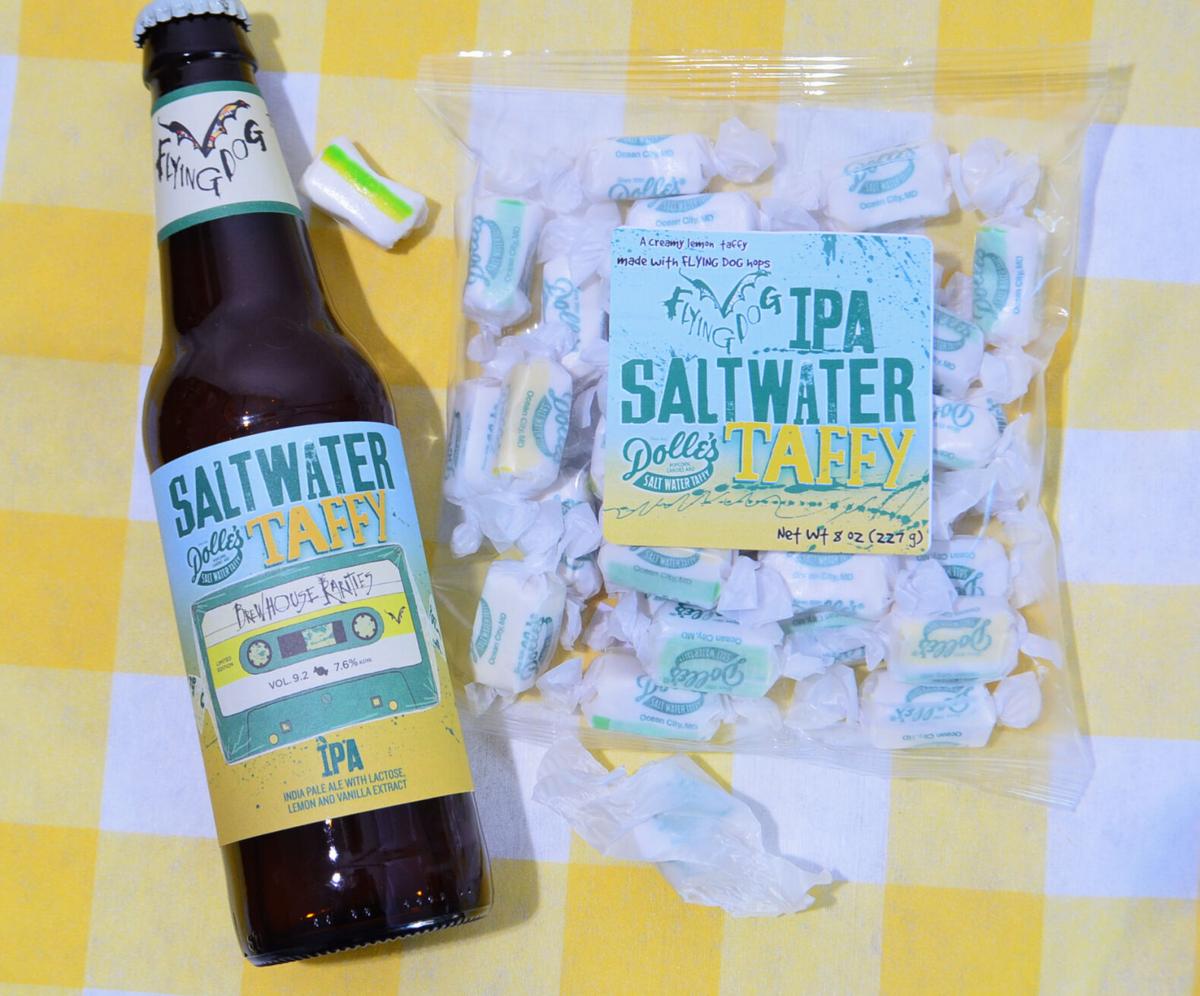 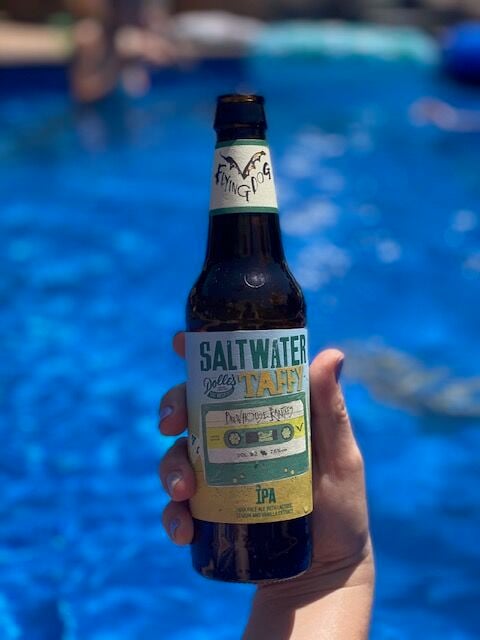 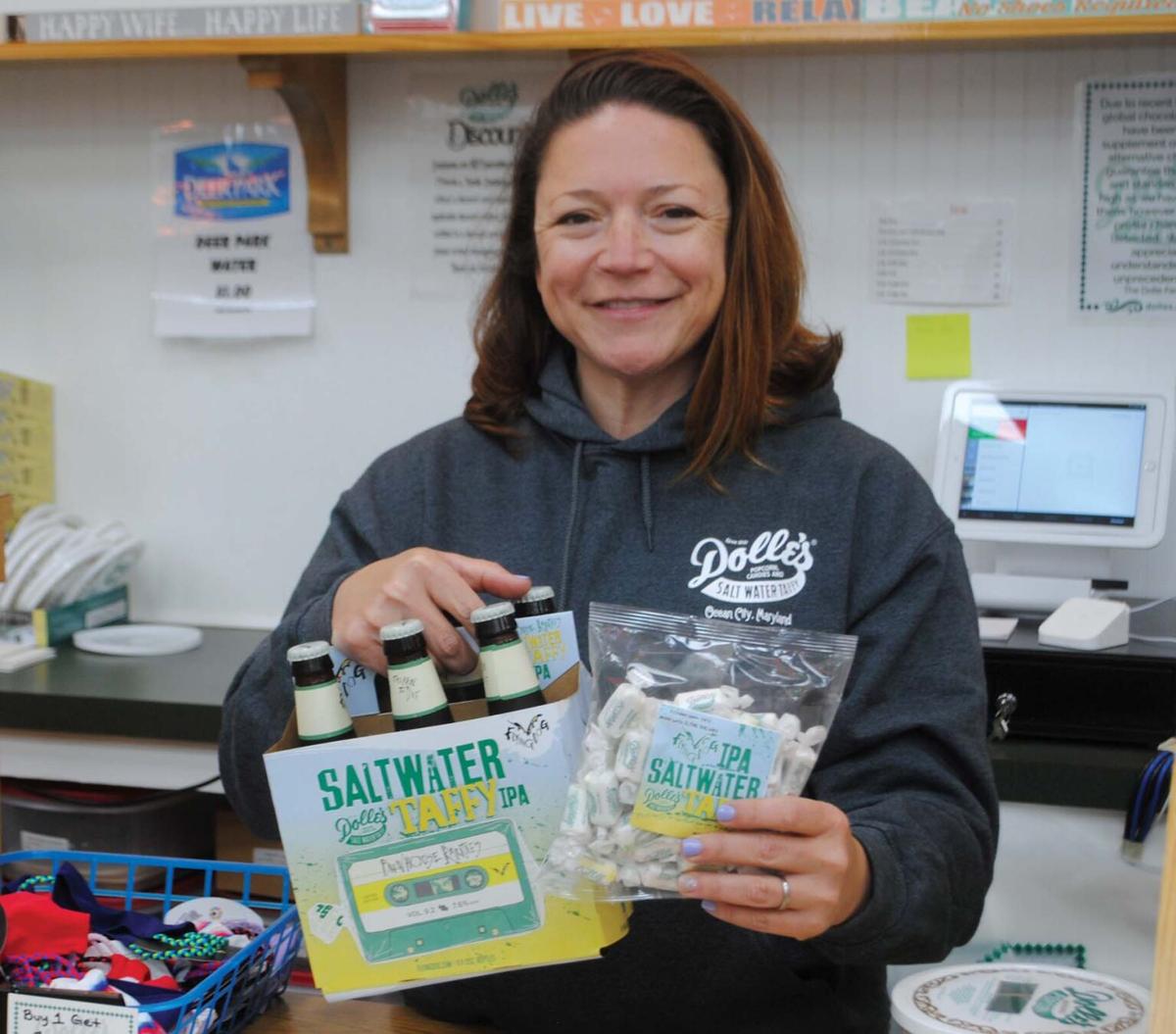 Anna Dolle Bushnell, the owner of Dolle’s Candyland, poses with Flying Dog Brewery’s new Saltwater IPA and a bag of saltwater taffy flavored with hops at her downtown shop. Frederick-based Flying Dog and Dolle’s collaborated to make both the beer and taffy, which are both available now in Ocean City.

This story has been updated to correct that the Saltwater IPA is only available in bottles in Ocean City, not on tap.

That was the thought Frederick-based Flying Dog Brewery Sales Director Steve Olintz had when he came up with the idea to flavor an IPA with the light, sweet summer flavor of Dolle’s saltwater taffy.

“Most craft beer enthusiasts love IPAs, but on a hot summer day it can be rough getting down a big, bitter beer,” Olintz said via email recently of Flying Dog’s new Saltwater IPA .

“So I thought if we created a beer inspired by a popular saltwater taffy flavor, it would add some sweetness to the beer while bringing back classic memories of walking on the Boardwalk,” he continued. “The whole thing comes together to create the perfect summer beer.”

With a blend of freshly squeezed lemons, citrus hops and vanilla creaminess, the 7.6 ABV beer takes drinkers right to Dolle’s Candyland on the Ocean City Boardwalk at the peak of summer. And as a complement, Dolle’s has created its own saltwater taffy flavored with Flying Dog hops.

“[Flying Dog] contacted us last fall and asked if we wanted to do a collaboration between the brands and we were game,” Dolle’s Candyland owner Anna Dolle Bushnell said. “Over the course of the winter, we sent them our lemon oil to create a tart and sort of saltwater taffy flavor that’s lemony and bright. We worked with them on that and did the same thing with the saltwater taffy so we could sort of match it.”

The fluffy white taffy trimmed with yellow and green stripes is creamy, light and sweet with a bit of tang. It contains hops, lemon and vanilla and took a couple of tries to get just right.

“The first batch was a little bitter,” Dolle Bushnell said. “But we changed the flavor profile a bit and now we have a saltwater taffy made with Flying Dog hops.”

She said both the taffy and beer are delicious and she looks forward to people tasting both.

“People love it,” she said of the feedback she’s received so far on the taffy. “They think it’s really fun that it has two Maryland names on it that are familiar and it’s perfect timing with it being the beginning of summer."

Eve Butt, the director of public relations for Flying Dog, said via email that Olintz came up with the idea for the Saltwater IPA and collaboration with Dolle’s during the brewery’s annual Brewhouse Rarities event where employees are encouraged to pitch ideas for new beers.

“We know we’ve got a team of creative beer geniuses at the brewery and we love bringing their innovative ideas to life,” she said.

The partnership with Dolle’s is also not the first time Flying Dog has teamed up with an Ocean City business for a beer. Butt said a promotion in 2017 contained a caramel lager that was brewed with caramel from Fisher’s Popcorn, and a 2020 beer called In God We Crush was inspired by orange crushes, which originated in Ocean City.

Butt said the Saltwater Taffy IPA is available now in bottles at several Ocean City spots. The taffy is also available at all Dolle’s Candyland locations across the resort.