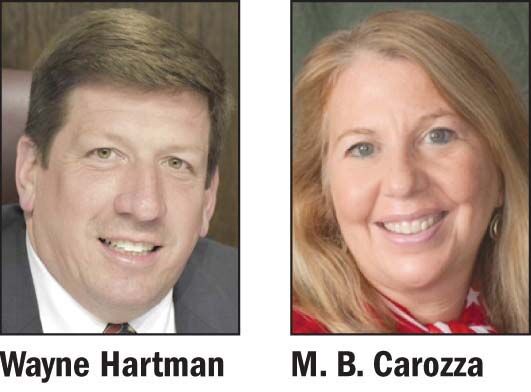 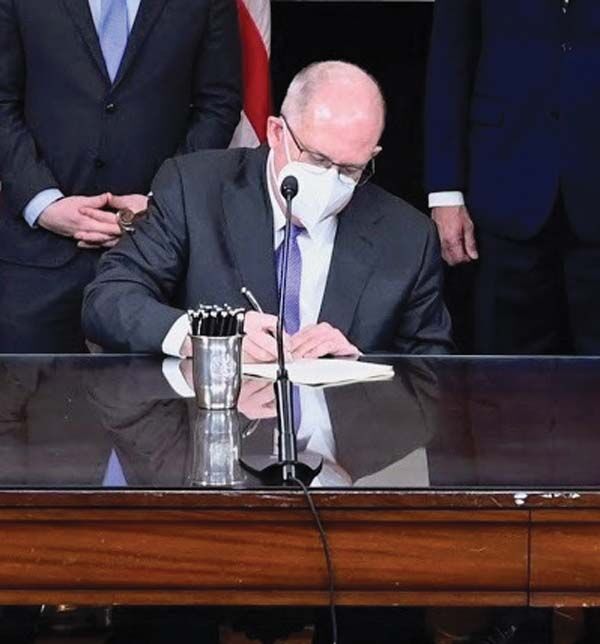 (Feb. 19, 2021) Gov. Larry Hogan’s covid-19 emergency RELIEF Act passed in the Maryland General Assembly on Feb. 12 and was sent to the governor to sign on Monday.

The RELIEF Act is an emergency stimulus and tax relief package intended to provide over $1 billion for Marylanders and small businesses.

Hogan held a bill-signing ceremony for the RELIEF Act of 2021 on Monday.

“As a part of this bipartisan legislation, people who have lost their jobs will not have to pay any state and local income taxes on their unemployment benefits, letting them keep more money in their pockets,” Hogan said during the ceremony. “Tax relief for small businesses will let them keep up to $9,000 in their pockets over the next 90 days, so that they can keep their doors open and keep people on the payroll.”

Small businesses will also be protected against substantial or sudden increases in their unemployment taxes, the governor said.

“Today, I want to sincerely thank the leaders on both sides of the aisle for coming together to pass this measure with near unanimous support. It’s almost unheard of for any major piece of legislation to pass in such a short period of time and with such universal bipartisan support,” Hogan said.

In just three weeks, Senate Bill 496 made it through both chambers with improvements and back to Hogan for his signature.

The law went into immediate effect after being signed on Monday.

During a press conference on Tuesday, Maryland Comptroller Peter Franchot said his office will issue more than $200 million in payments in the upcoming weeks to help Maryland taxpayers, unemployment insurance claimants, small businesses and nonprofits significantly affected by the covid-19 pandemic.

Taxpayers can go to www.MarylandTaxes.gov/ReliefAct to see if they qualify and check the status of their payments. They can also call 1-833-345-0787 or email ReliefAct@marylandtaxes.gov for assistance.

Those who qualify for a RELIEF Act stimulus payment will be automatically processed either via direct deposit or paper checks unless their address on file is not verifiable with the U.S. Postal Service, Franchot said.

There are nearly 6,000 recipients whose address information needs to be verified by the agency. Those individuals have been contacted and asked to call 1-833-345-0787 or email ReliefAct@marylandtaxes.gov to provide current information so the payments can be issued to them.

Under the RELIEF Act, 422,531 recipients are eligible for one-time stimulus payments of $300 or $500. Taxpayers who claimed the Earned Income Tax Credit in Tax Year 2019 and reside in or have permanent residence in Maryland as of Feb. 12 are eligible for payments.

In total, 98 percent of RELIEF Act stimulus payments to individuals in need will be processed by this Friday.

Furthermore, 32,000 Marylanders waiting for unemployment insurance adjudication will be sent $1,000 grants once the state Department of Labor sends the Comptroller’s Office a list of recipients.

The RELIEF Act also includes waiving state income taxes on unemployment insurance income received during 2020 and 2021 for single filers who report under $75,000 in income and joint filers who report under $100,000. Taxpayers who have already filed their 2020 state tax returns can file an amended return for a full refund of Maryland state income taxes on those unemployment insurance benefits, according to the Comptroller’s Office.

In addition, the state Senate reconsidered House Bill 1300, Blueprint for Maryland’s Future bill, which lays out a broad education reform plan that would have increased state and county annual education spending by roughly $3.2 billion per year over 10 years.

“It’s the single largest spending undertaking the state has ever considered,” said Del. Wayne Hartman (R-38 C). “My concern is not just the cost. It’s the timing that we’re doing it. We’re doing it at a time when we should be trying to put money in the hands of Marylanders because of the pandemic that we’re still trying to get through.”

Hogan vetoed the bill in 2020 given its fiscal impact.

“We have a blueprint costing nearly $40 billion over 10 years, a Kirwan plan that we simply cannot afford, especially in the midst of an international health pandemic, and which does not provide local flexibility and control which is especially needed during the covid-19 crisis,” Carozza said on the Senate Floor.

“I strongly believe our constituents expect us to balance the ideal with the possible when it comes to funding Maryland’s education priorities, which means factoring in the reality of the significant state and local fiscal impacts, and balancing education and non-education priorities, especially during a global health pandemic,” Carozza continued.

Carozza also spoke out during the debate on an override of House Bill 732, which establishes a tax on digital advertising. She voted against the increase and voted to sustain the governor’s veto.

“Here we are, we have been working together on the covid-19 emergency relief package and I’m proud of our bipartisan work together …but then we turn around and we’re going to increase taxes during the covid-19 recovery,” Carozza said during her floor remarks.

During the debate, Carozza also read from an email she received from a constituent in Bishopville, who was concerned about the possibility of tax increases.

“I have been a Maryland resident for all 66 years of my life but if taxes are increased, I will be forced to flee Maryland and move two miles away (Delaware) where it is far more affordable. Please vote against increasing taxes and vote for a decrease in taxes for senior citizens in my beloved state of Maryland,” the constituent wrote.

Both vetoes were overridden on mostly party lines.

“House Bill 4, that was another governor’s override that was kind of disappointing,” Hartman said. “It interferes with the transfer of long guns, which here on the Eastern Shore have commonly been traded without any interference of government.”

He added that there is limited documentation that long guns are used for crime.

“It’s just another infringement on the Second Amendment right,” Hartman said. “An illegal transfer under this bill, which could mean lending someone a gun without going through the proper procedures, would have a greater penalty than actually stealing a gun, which makes zero sense.”

House Bill 4 was passed in the House of Delegates during the 2020 session, but the governor vetoed it. The veto was overridden on Feb. 12 and will become law on March 14.

Hartman’s balloon release ban is expected to come up for third reading and final vote in the House and then go to the Senate.

In addition, Hartman recently spoke with the Worcester County Commissioners about his Sunday hunting bill.

“I’m trying to get them to reconsider it with a vote this week on an amended version that would take out any wildlife management areas or public property, and the bill would strictly be a Sunday hunting bill on private property for various mammals and birds in-season,” Hartman said. “It would exclude federal migratory birds, anything such as geese and ducks, that are covered by federal regulations.”

As for his concealed carry bill, which would require the Secretary of State Police to issue a certain permit to carry, wear or transport a handgun to a person who meets certain requirements and is employed in a specific profession, Hartman said the hearing on Feb. 10 went well.

House Bill 538 is cross filed in the Senate.

“There’s definitely documentation out there to support the need for the bill. Hopefully, that the committee chair will take it [seriously] and get it before committee for a vote and have it get voted out of committee,” he said.

Furthermore, a hearing for Wade’s Law is scheduled for Feb. 24.

The legislation, filed by Carozza, increases penalties for criminally negligent driving that causes a life-threatening injury. Hartman added that Carozza has been trying for years to get the bill passed.

Additionally, Hartman said he supports House Bill 1, which would financially benefit the University of Maryland Eastern Shore and other historically Black colleges and universities across the state.

“The additional funding will help grow that university,” he said.

The bill was cross filed  in the Senate and co-sponsored by Carozza. Senate Bill 1 passed on Feb. 5.

Hartman also supports House Bill 247, which give priority to older voters and those with disabilities and the person bringing them at polling places, and House Bill 373 regarding school employment and actions to be taken during a 60-day timeframe.

“It also allows board to share employment history with other boards of education,” he said.

“Access to alcohol and drug counseling through telehealth is increasingly important especially given the devastating data from the Maryland Health Department and Opioid Operational Command Center. There were 2,025 overdose deaths in Maryland in the first three quarters of 2020. That is a 12 percent increase from the same period in 2019,” Carozza testified. “These numbers make it clear that Maryland cannot let up in our efforts to provide the needed counseling services and treatment to those with alcohol and drug addictions. Senate Bill 646 would ensure that alcohol and drug trainees can continue to provide telehealth services after the COVID-19 pandemic.”

“We know that alcohol and drug counseling services are critical, especially during the pandemic where we have seen a downward trend in mental health. Alcohol and drug trainees are key to the makeup of the addictions counseling workforce and essential as we continue to face workforce shortages in the field of substance use disorder treatment,” Carozza said. “With the expanded use of telehealth throughout our health care system including the allowance of ADTs to provide telehealth services for the last 10 months, it only makes sense to allow ADTs to continue to provide telehealth services so more clients can benefit from these lifesaving counseling services.”