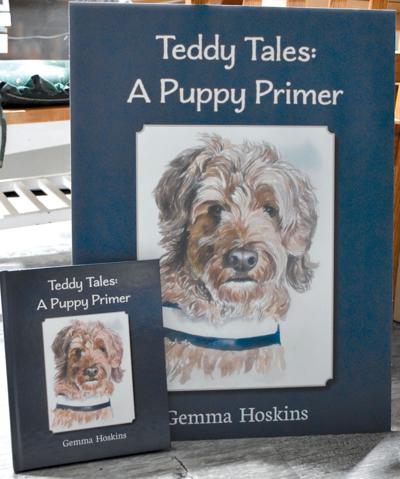 (Oct. 8, 2021) Gemma Hoskins, who was unenlightened about canine behaviors before bringing her first dog home nearly a decade ago, has used the extended learning curve as inspiration for her second book, “Teddy Tales: A Puppy Primer.”

Hoskins and Teddy gained notoriety after being featured in the Netflix true-crime series “The Keepers” and more recently turned the spotlight into an opportunity to publish a volume about a lighter topic than unsolved crimes.

“This is the commercial break to lighten everybody up a little bit,” she said.

“I’ve been writing about having a dog for the last 10 years because I never had a dog,” she said.

The extended journey into puppy ownership got sparked unexpectedly in October 2010 when Hoskins was exposed to the labradoodle breed.

“My first sighting of a labradoodle was at an outdoor party at a wind farm,” she said. “I’d never seen one before.”

Instantly smitten, Hoskins sensed karma was at play after returning home from the affair and chancing upon an episode about the cross between a poodle and a Labrador on the Pet Channel.

Convinced the random occurrence was a sign from beyond, Hoskins began researching the breed online.

“All winter I kept thinking this is what I want to do,” she said.

By early spring 2011, Hoskins attended an open house held by the breeder.

“We got to meet all the dog parents,” she said.

To begin the process, Hoskins completed an eight-page application.

“She was a serious breeder,” she said. “You had to follow the rules and you weren’t allowed to see your dog until the day you picked [it] up.”

After becoming familiarized with labradoodle blood lines, Hoskins requested a “red boy,” from the breeder.

“She said, ‘I pick the one … you don’t get to pick,’” Hoskins said. “She said, ‘I have to look at your application and it will match you.”

In the end Hoskins’ choice was greenlighted.

“I got a red boy,” she said. “His mother’s name was Sadie Soleil and his dad was Hobson’s Choice.”

“It’s all in here with pictures,” she said.

While Teddy was still a puppy, he had a chance encounter with his father.

“He met his father when I took him to a ‘yappy hour,’ in Ellicott City at the Wine Bin,” she said.

During the fundraising event, a fellow labradoodle owner approached Hoskins.

“She said, ‘I have Teddy’s father,” she said. “They met and he wasn’t impressed because he was already bigger than his father.”

“I wasn’t a real dog lover,” she said. “I was terrified of him when I got him and he could tell and picked on me.”

“He was so cute but I was fearful,” she said. “We learned some basic commands [but] he started biting on me and being mean.”

After being advised about another trainer in the region, Hoskins made a second attempt at gaining control of the rambunctious pooch.

With limited success and still at a loss for solutions, Hoskins consulted her veterinarian.

The doctor offered a key insight to address the power imbalance.

“He said, ‘Teddy’s in charge but you have to be in charge,” she said.

The assessment was validated after attempting to have Teddy groomed.

“I took him to Pet Smart for grooming,” she said. “By the time I got home Pet Smart was calling me saying, ‘Come and get him, we can’t handle him.’”

Still under a year old, Teddy’s frantic energy was on full display.

“When I brought him out of the grooming room, he got loose in the store and the manager was yelling, ‘Loose dog in the store,’” she said. “There’s Teddy walking around the store like he owned it.”

“He’s a ham,” she said. “I’m always putting stuff about him on Facebook.”

“He was the showoff in the class and was so good,” she said. “He loved it.”

These sessions eventually phased to the dance floor.

“We attended ‘Dancing with Your Dog,’ where people wore matching costumes with their pet,” she said. “He learned to dance.”

With Teddy hitting the decade mark this December, Hoskins said the early struggles have faded into memory but did yield sufficient fodder for the new book.

“People are buying it,” she said.

In addition to original musings on canine topics, the book is also filled with artwork contributed by Facebook fans of Teddy.

Although not available on Amazon until next month, the Teddy release can now be purchased for $21.95 through publisher Salt Water Media or by visiting gemmahoskins.com.

Additionally, for $30 including shipping Hoskins is offering signed copies with a doggie swag bag.

“The book comes in a recycled plastic poop bag with a joke printed on it,” she said.

Hoskins will be signing copies of “Teddy Tales: A Puppy Primer,” in person on Saturday from 1-3 p.m. at Sandy Paws Pet Supplies on 128th Street in the Montego Bay Shopping Center. Books will be available for $25 with $10 of each sale donated to the Worcester County Humane Society.