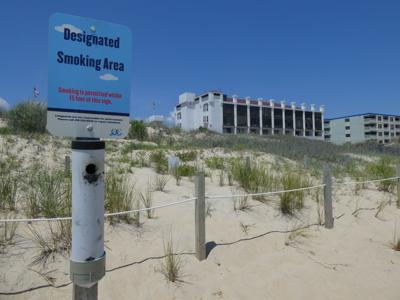 (Jan. 17, 2020) With 360,000 plus cigarette butts recycled, it would be safe to say the public portion of the Ocean City Green Team’s cigarette butt receptacle, or butt hut, program was tremendously successful last summer.

Riding on this wave of success, Ocean City government’s Green Team hopes to add at least 20 more butt huts in high priority areas, with an eventual goal of reaching the Delaware state line.

However, the Department of Public Works, tasked with emptying the litter collectors, questioned the viability of such an expansion, as it found itself already struggling to keep up.

“Who is servicing them? … we did get some criticism this past summer where we had some that were out there already that were overflowing. They weren’t overflowing because we ignored them, we just didn’t have time to get to them,” Public Works Director Hal Adkins said.

Adkins has mentioned before how his department was stretched thin, as his staff has not grown since the 1980s, yet their responsibilities have grown — a point he made during last October’s Strategic Planning Update meeting.

In response, Adkins said he would be increasing the size of several butt huts that saw extreme usage, but the solution would be temporary.

He said if the team were to move forward with an expansion, an intern would be needed to aid in disposal work, and he asked City Environmental Engineer Gail Blazer if there funds available to hire one.

“If we tried to create an intern program where we had someone probably working for you that could help service these — the money you [Blazer] accumulate annually for your mitigation fund … can any of that be used?” Adkins asked.

Blazer said the idea had been initially brought to her attention by Sandi Smith, Maryland Coastal Bays Program marketing and development coordinator, and she had been on board to fund it, at first.

“I said yes at first, thinking it was only a couple thousand dollars, but she’s [Smith] thinking $20,000. That money is not meant for that purpose at that level,” Blazer said.

Smith explained the original figure had been a ballpark estimate, but now that an intern recently had completed his or her term, she had a better gauge as to how much the group would need in the future.

Additionally, Smith said the group might be able to work with Salisbury University’s environmental studies department, as it had an internship requirement.

“They don’t necessarily have to be minimum wage paid internships, so we can create a stipend program. It could be more like a $10,000 investment if we did it all year long,” Smith said.

It could be even less than $10,000 if the internship was only a few months, Smith said.

Furthermore, Smith said she had already secured money from the Environmental Protection Agency that could be used to hire an intern for the summer, as long as he or she is from the University of Maryland Eastern Shore.

“Long story short, at least this year, we have EPA funding to get this intern to do this [butt hut program],” Smith said.

Cloudy and damp with rain early...then becoming partly cloudy. Low 44F. Winds SW at 10 to 20 mph. Chance of rain 100%. Rainfall near a quarter of an inch.

Some clouds in the morning will give way to mainly sunny skies for the afternoon. Morning high of 48F with temps falling to near 35. Winds NW at 15 to 25 mph. Higher wind gusts possible.