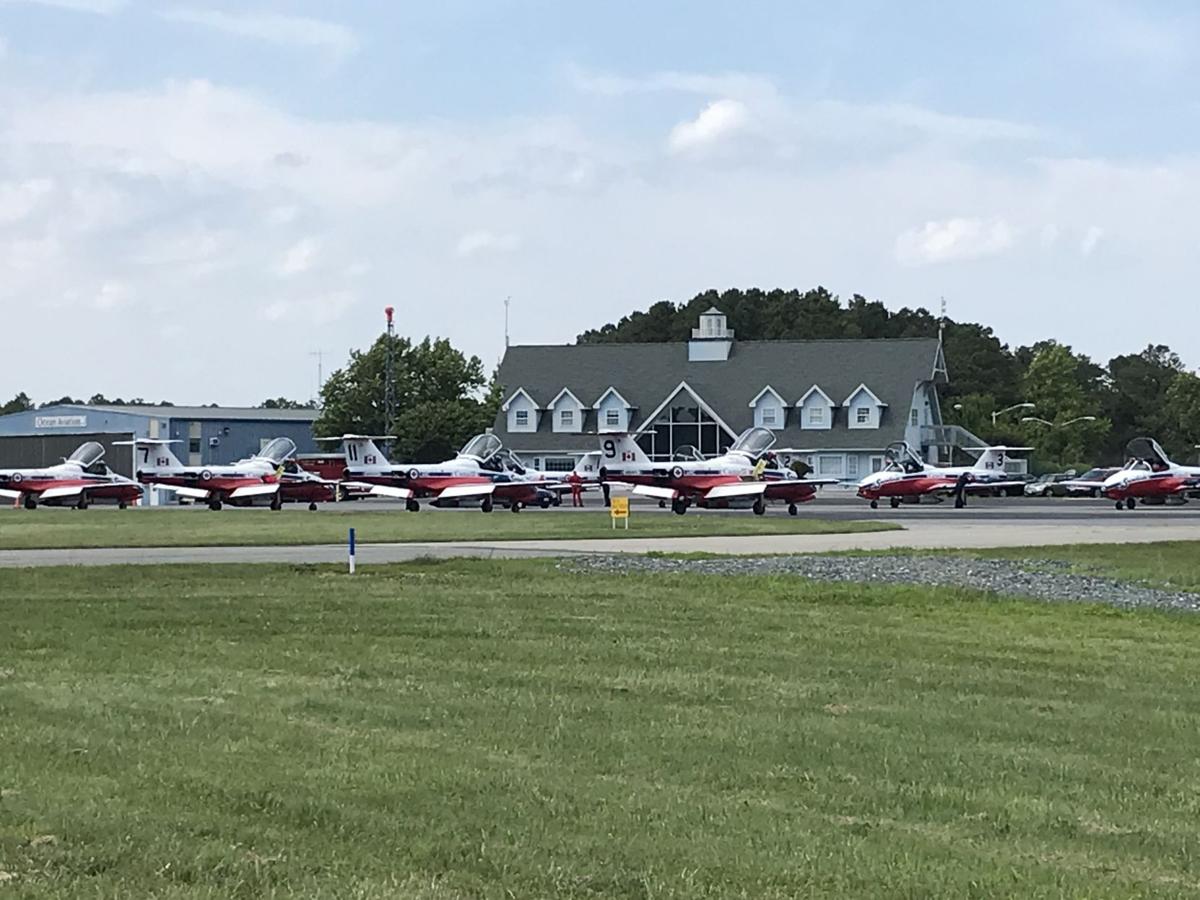 The Ocean City Municipal Airport Berlin is on the edge of the 30-mile fight plan radius that will be implemented when President Joe Biden visits his home in Rehoboth Beach this summer. 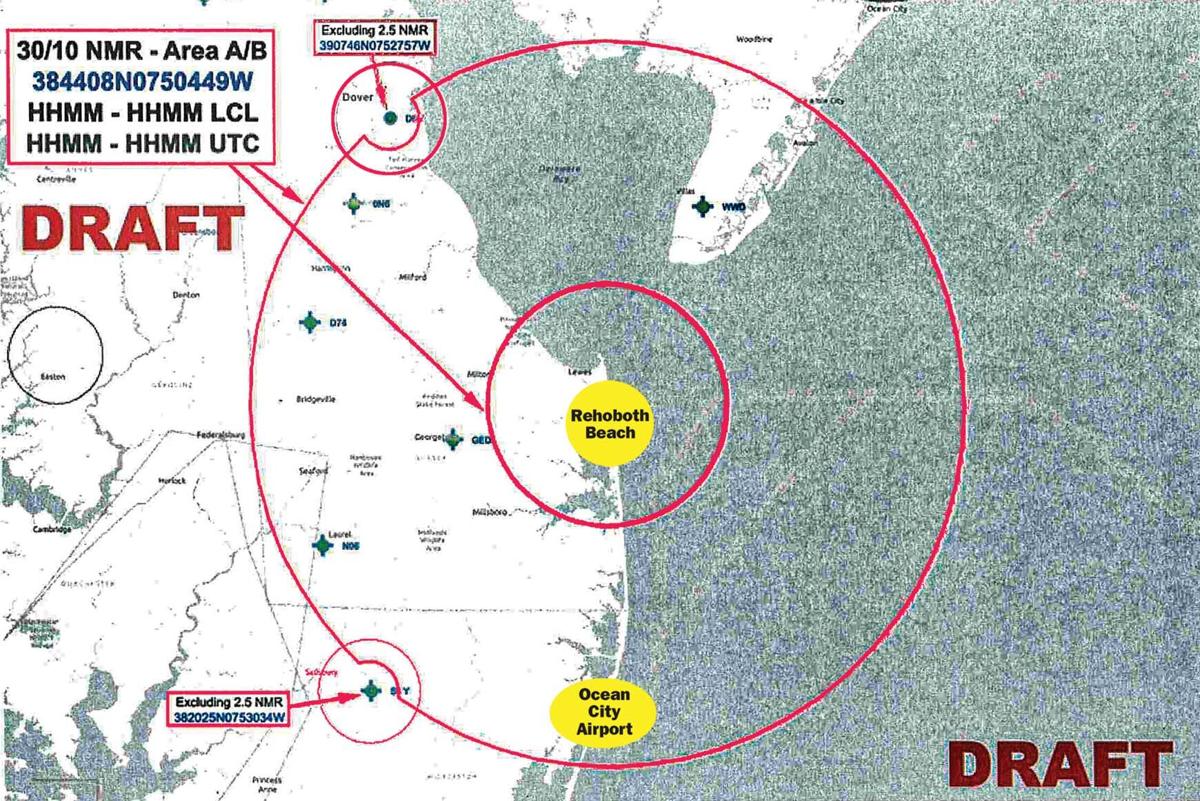 A draft version of a Temporary Flight Restriction, or TFR, that the FAA is set to issue when President Joe Biden visits his house in Rehoboth Beach. The Ocean City Municipal Airport is on the edge of the 30-mile radius that restricts flight activities

The Ocean City Municipal Airport Berlin is on the edge of the 30-mile fight plan radius that will be implemented when President Joe Biden visits his home in Rehoboth Beach this summer.

A draft version of a Temporary Flight Restriction, or TFR, that the FAA is set to issue when President Joe Biden visits his house in Rehoboth Beach. The Ocean City Municipal Airport is on the edge of the 30-mile radius that restricts flight activities

(April 2, 2021) The president of the United States taking a weekend vacation may not seem like a huge deal.

But for those running air-based businesses in Ocean City, President Joe Biden’s leisurely jaunts to his Rehoboth Beach house this summer could have major impacts.

From its location in Berlin, the Ocean City Municipal Airport is just barely inside the 30-mile radius — called a Temporary Flight Restriction, or TFR — that federal officials will set up each time the president travels to the area by air.

Airport Manager Jaime Giandomenico explained that the implementation of the TFR essentially prohibits most aircraft from flying within that radius during those travel times, which he anticipates will have a “major financial impact” on businesses at the airport.

He said the regulations are not so much an issue for transient planes that fly in and out of the resort, but for those that perform activities that keep them more confined to the area, like dropping skydivers, carrying sightseers, crop dusting and flying banners.

“Ocean City is a resort town. Two-thirds of takeoffs and landings occur between Memorial Day and Labor Day,” Giandomenico said. “People build their vacations around these activities — skydiving, they take a helicopter around … these are ubiquitously Ocean City attractions. If you plan that three months in advance and find out you’re not going to be able to do it, it’s more than just a bummer, it sours your whole vacation.”

One of the major issues is the uncertainty of it all.

Skydive Ocean City owner Jeanice Dolan said the United States Parachute Association put her on notice early about the restrictions and what they mean, but she has no way of knowing how often she will need to implement them.

She explained that unless she is granted a waiver, or “cut out,” — which she has applied for — when the TFR is in place, she will not be able to operate at all. She hopes the waiver will be granted because her airport-based business is just barely in the radius at 29 miles out.

“The prospect of being shut down on select weekends when the VIP TFR is in place is frustrating,” she said. “Because we are so close to that 30-mile radius we are really trying to get a waiver.”

Bob Bunting, the owner and operator of Banner Planes and Red Biplane Sightseeing, has similar concerns about his banner planes, sightseeing tours and crop-dusting operations. He flies from both a location at the airport and from Bunting’s Field further in Berlin. Both locations are on the edge of the TFR.

Bunting said that while he is concerned overall about having to change or halt his operations, he is mostly frustrated with the lack of information and correspondence he is receiving from the federal government.

“We can’t prepare. We can’t even hire our pilots or anything without knowing something, and we know nothing,” he said. “We normally have five to six banner planes on the beach, three to six [agriculture and crop dusting] planes, one to two sightseers in the air … so you can imagine the devastating effect it would be.”

Mike Freed, the president and CEO of Ocean Aviation Flight School, which is the third business that operates from the airport, is less concerned about his operations, as he can implement some workarounds to keep going. But he said he also has not received a lot of information.

“We’re waiting to be better informed,” he said. “From all indications, I have spoken to the secret service and the FAA, I do not believe that we will be impacted. But the community here, we are all good friends. The skydiving, sight-seeing flights, I’m concerned about them as well.”

Giandomenico said federal officials have given him some information about the intricate rules — and strict penalties — associated with the TFR, however he is still not sure how often they will be enacted. He also does not expect to know very far in advance due to national security protocols.

“The unpredictability of the thing is part of the impact,” he explained. “[President Biden] hasn’t been in Rehoboth yet but he has spent quite a bit of time at his Wilmington location. There’s a similar 30-mile ring set up and it has been affecting a group of airports in Maryland pretty much since the time of his election. Our time is coming once the weather gets nice. You don’t have a beach house to spend time in February.”

He added that if the amount of time Biden spends in Rehoboth is similar to the time he has spent in his Wilmington home this winter, the Eastern Shore can expect a presidential visit about two weekends out of five.

Also, anyone who flies in any capacity within the radius, which includes drones, should know all of the rules because of the implications if an aircraft is found operating inside the radius.

“Aircrafts that transgress this TFR and wind up in the place they’re not supposed to be, not talking to the right people, they’re subject to interception by fighter aircrafts … It’s a pretty serious thing,” Giandomenico said.

Arlene Salac, a spokesperson for FAA, said via email that impacts to airport and aircraft operations at the Ocean City airport will vary “based on restrictions outlined in each TFR Notice to Airmen.” She said officials encourage pilots and operators to continuously monitor the notices and advisories for the latest TFR information.

She added that FAA officials work closely with U.S. Secret Service and the Department of Defense to “inform users through as many avenues as possible.” The email said virtual and in-person outreach efforts through advocacy groups will continue at local airports once coordination is finalized with the Secret Service.

An earlier version of this story misspelled the word Rehoboth.