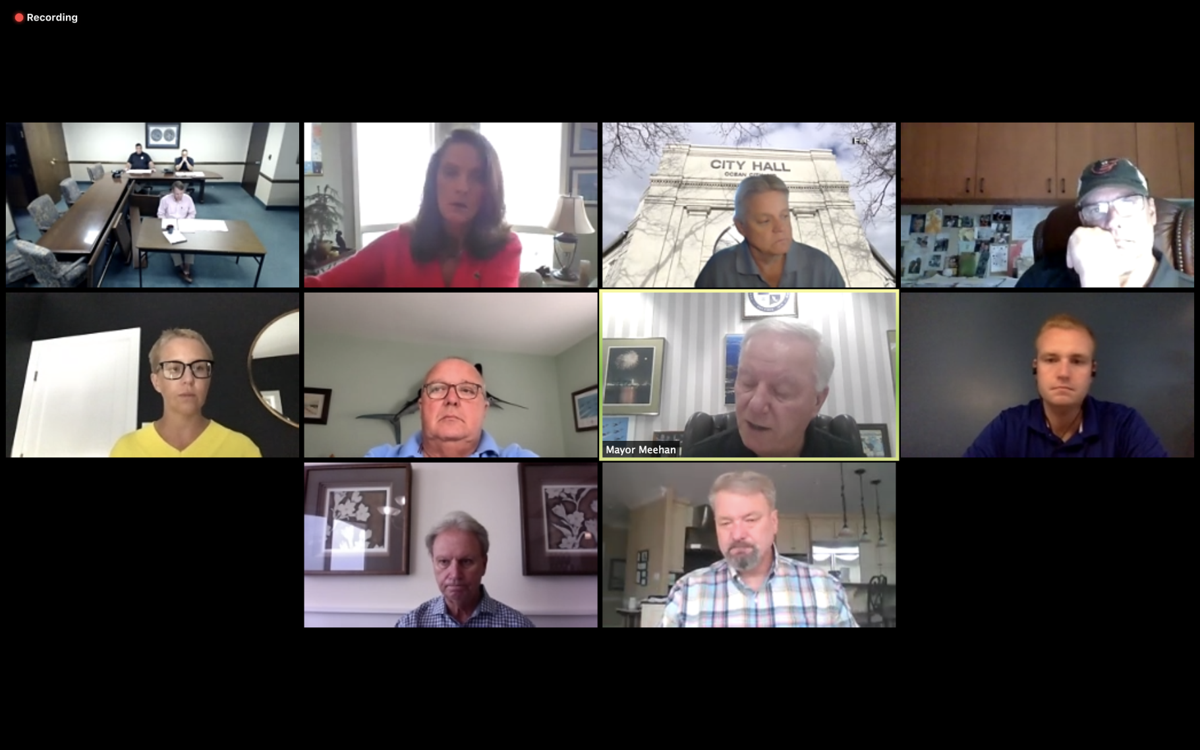 Mayor Rick Meehan issued an emergency declaration Friday morning mandating masks to be worn on the Boardwalk from 8-2 a.m., regardless of social distancing. 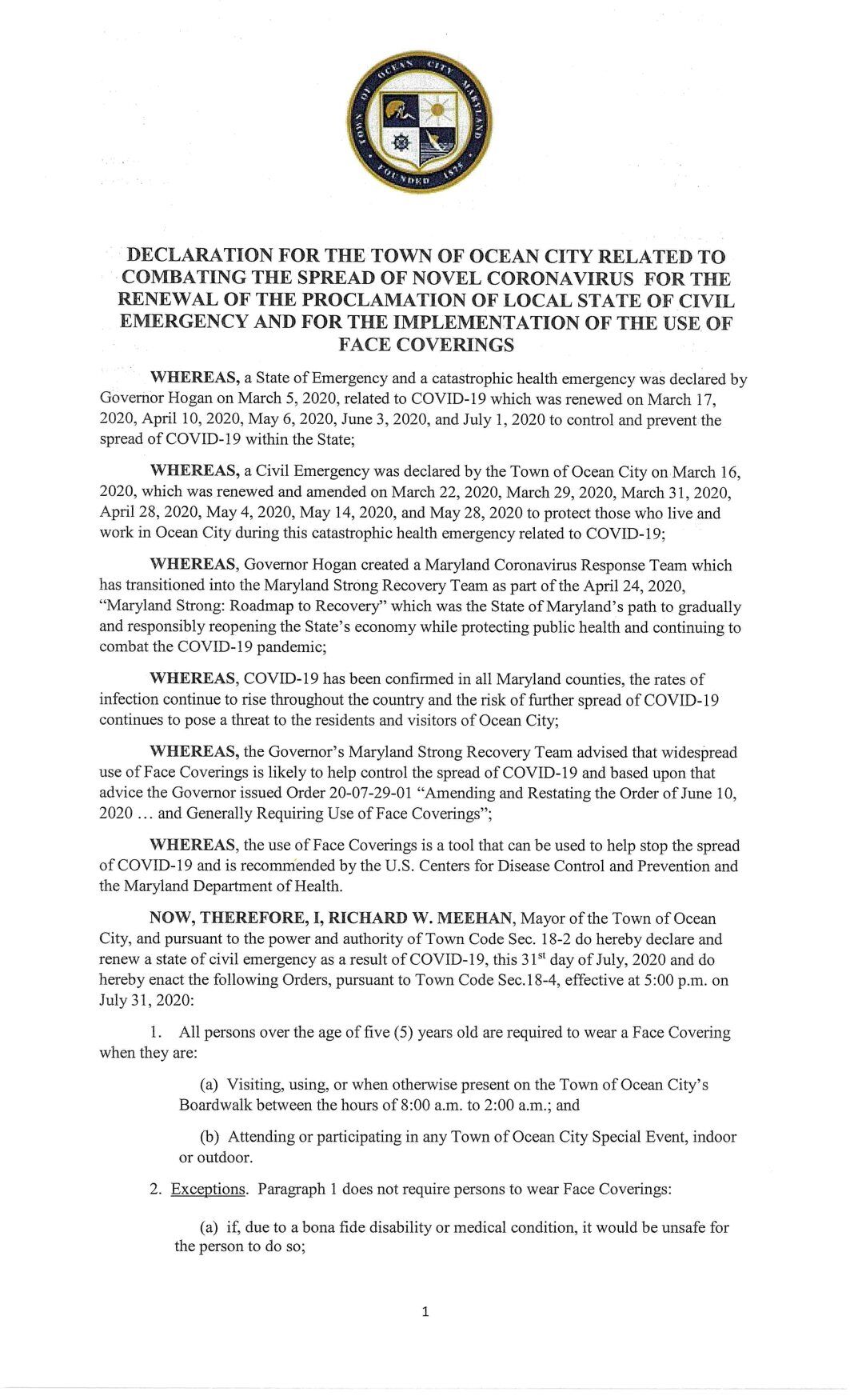 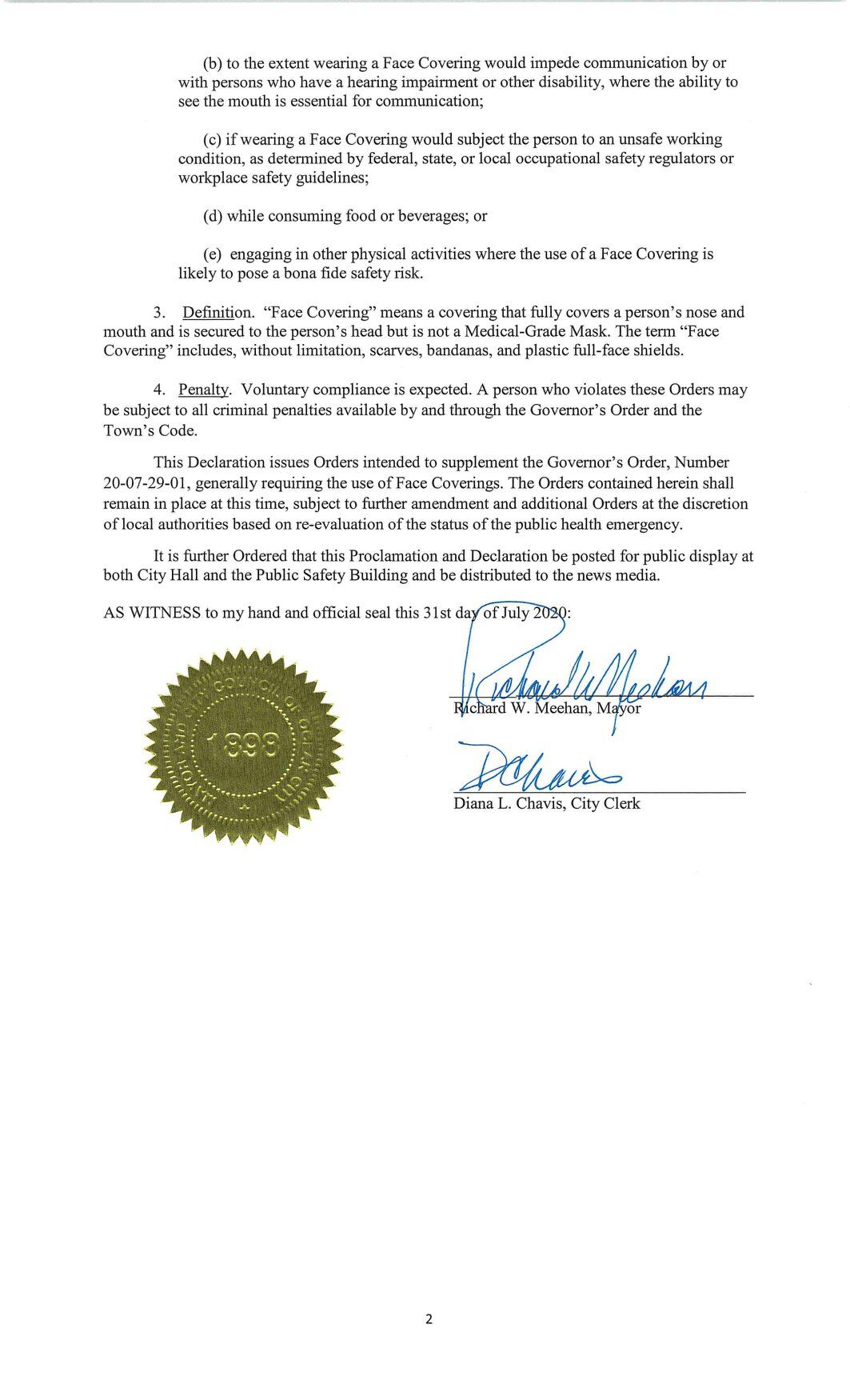 Mayor Rick Meehan issued an emergency declaration Friday morning mandating masks to be worn on the Boardwalk from 8-2 a.m., regardless of social distancing.

(July 31, 2020) As a follow up to Gov. Larry Hogan's mask order, Ocean City Mayor Rick Meehan issued an emergency declaration early Friday afternoon that will require masks on the Boardwalk from 8 a.m. to 2 a.m.

Meehan’s new rule, issued during an emergency meeting of the mayor and City Council, becomes effect 5 p.m. today and will apply to everyone above the age of 5, regardless of ability to social distance. Additionally, masks will be required at all special events.

“One of the challenges we face and have faced is on the Ocean City Boardwalk,” Meehan said. “There are many instances where you can social distance and there’s certainly, I think, an effort by the public … to do that. But there are also situations that you can’t, and they become more frequent as the crowds build.”

In conjunction with the emergency order, Meehan sought the council’s approval of an emergency ordinance, which would call for violations to be a municipal infraction, akin to a smoking citation, rather than a misdemeanor, as per Hogan’s order.

Meehan clarified that his order did not encompass the beach, as most people have been socially distancing and could comply with Hogan’s order.

“Those individuals playing soccer would be engaging in physical activities where the use of face coverings would likely pose a bona fide safety risk and that would be an exception E [under the governor’s order],” city attorney Heather Stansbury said.

In response to a question, Councilwoman Mary Knight was told that even people walking on the Boardwalk in the early morning, when there are fewer people, would be required to wear a mask as well.

“Because the Boardwalk is such a fluid place, it was very difficult to find a time or day restriction,” Stansbury said. “There’s just too many unknowns up there, so yes, of course, voluntary compliance and then ultimately an infraction would be the way that would be policed.”

Councilman John Gehrig said he understood the intention of the order, and had been pushing for city officials to create a Boardwalk and special event mask policy for some time, but that his emails to the council had gone unanswered.

However, “It just feels like we’ve gone from zero to 100 here,” Gehrig said. “We’re overreacting — we’re setting ourselves up for failure.”

He pointed to the spring, when the city closed itself to visitors, but could not truly enforce it.

Rather, Gehrig said the order should establish certain zones and hours of the day where crowding proved inevitable on the Boardwalk, which would be more easily enforceable.

He also said police should carry masks to give out — earlier Stansbury said that had not been the expectation — and that enforcement needed to focus on education, politeness and voluntary compliance.

“What the governor stated the other day was reasonable — you basically make a choice and [use your own] discretion,” Gehrig said. “We’ve basically taken it to a completely different level.”

He added that if the ordinance passed, the city had to be explicit with its intentions for enforcement to not confuse or overly frustrate the public.

Councilman Matt James agreed, and asked whether officers and public works employees would also be required to wear the masks, The question went unanswered.

Councilman Mark Paddack and James also mentioned the resort’s publicity, which has taken a hit in the last several months.

“The town has seen millions of dollars in cancelations, from being put on the quarantine list of other states and the cancelation of Bike Fest. This is just one more thing that’s going to negatively impact the economy here” James said. “If we’re not going to be enforcing, which I don’t think we will be able to enforce this, there’s really no sense in doing it.”

Knight asked police Chief Ross Buzzuro what the enforcement process would look like.

Buzzuro said he needed clearer guidance from city officials, and warned of the negative publicity associated with strict enforcement.

“Are we looking at education at all costs versus enforcing this ordinance?” Buzzuro asked.

“If we’re just going to be educational, we don’t need an ordinance,” Gehrig added.

Meehan said the goal was to educate, seek compliance and then enforce if necessary.

Buzzuro expressed his concerns over the optics of enforcing mask violations.

While many will voluntarily comply with the order, some won’t, he said, and those who don’t could be arrested.

“Whenever we take action on the Boardwalk, rule of thumb is we’re being viewed through cameras [and] through phones,” Buzzuro said.

He also said there was a legal issue, as some people legitimately cannot wear a mask and have ADA exceptions.

“People have become more emboldened,” Knight said. “I know restaurant workers are getting spit on when they ask a patron to put on a mask. I know retailers in Berlin have to break up fights between women my age because they won’t put on a mask.”

She said she did not want to see videos online of local law enforcement issuing citations and with violators mouthing off the resort.

Paddack used the city’s Boardwalk smoking ban as an example of the potential consequences of fining violators.

“Multiple people said, ‘Give me the citation I’m never coming back to Ocean City again,’” he said.

Councilman Dennis Dare, however, said all of the council members’ arguments could be applied to the mask ordinance.

“You wouldn’t be harming anybody but yourself if you were smoking at 4:30 a.m. on the Boardwalk,” he said, yet the ban was all-encompassing.

He pointed to bicycles, how the city could have weekday and weekend hours or special zoning, but it doesn’t.

“I would suggest that we pass what we have, and for those who think there’s a better way to do this — prepare something we can look at,” Dare said. “If all of these fears come to pass on enforcement or compliance, then you’ll have something concrete.”

More importantly, Dare said Hogan had put his recovery plan on pause based on data derived not from internet articles, but from a team of experts.

The language of Hogan’s mandate was practically aimed at Ocean City’s Boardwalk, Dare said, and the spotlight was on the resort.

“Everybody’s looking at beach resorts right now, and the ones around us have already done what we are contemplating today,” Dare said.

If the council didn’t take this measure and cases continued to spike, another stay-at-home order could be issued, which would devastate the local economy more than any bad publicity.

“Either we take this little step here and do our part to help or take the bigger risk,” Dare said.

Meehan agreed, reiterating that public safety was the number one priority and that the proposed declaration would reduce the governor’s misdemeanor to a municipal infraction.

Nonetheless, Meehan said he would be willing to put a time period for his mask order, from 8-2 a.m., rather than a 24-hour policy.

Several council members took issue with the time slot Meehan suggested, and wanted to match the mask mandate with the city’s bike policy, which allows bikers on the Boardwalk from 2-11 a.m., or from 4 p.m. to 2 a.m.

After some debate, Meehan remained firm in the 8-2 a.m. policy period.

As for the emergency ordinance, Gehrig said it was unnecessary, as law enforcement would be educating and seeking compliance.

“Quite frankly, if we’re being educational and kind and we provide masks and we’re encouraging, and that one person … is being a complete jerk, I want them to get a misdemeanor,” Gehrig said.

The emergency ordinance failed to pass two to three, with DeLuca, Paddack and Gehrig in opposition and Councilman Lloyd Martin absent.

City Manager Doug Miller said he would look into the city’s inventory of facemasks to provide to law enforcement.

I'm sorry, but based on my viewings of the OCMD boardwalk cams the last few days, since masks were made mandatory, enforcement is a joke. There are way too many people walking around with no masks on. And I have not observed law enforcement making any attempts to educate them about the requirement or the consequences. It's basically a free for all out there. Why have the rule if you are not going to enforce it? It just seems that the decree was made to appease people, or, make visitors think it would be safe to come to Ocean City and visit the boardwalk. I for one would not and in fact had to cancel my vacation this year because if this behavior and the lack of enforcement. It's just not worth it to put my family at risk. And judging by the cancellations I am not alone. Lack of enforcement leaves possible visitors to draw the only conclusion they can, that Ocean City does indeed only care about the business/money and not people's safety. Regardless of what the mayor has said on this topic.