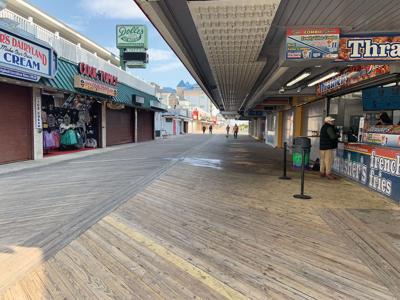 (March 27, 2020) The COVID-19 pandemic is not a joke, it is not a hoax and it is not just another flu — it is a real and dangerous virus that is projected to kill hundreds, if not thousands of Marylanders if it is not quickly contained.

That is why Ocean City Mayor Rick Meehan and the City Council chose to make the difficult decision on Sunday to close the resort’s beach and Boardwalk to the public, and restrict access on them to residents, until April 15.

“We had observed large numbers of people on the Boardwalk, and pockets of crowds on the beach, throughout the last couple of weeks,” Meehan said. “In the best interest of public safety for, not just our residents, but for those out on the Boardwalk exposing themselves during a time when we’re encouraging social distancing, that the only way to avoid that [exposure] would be to take that drastic measure and close our beach and Boardwalk.”

Effective Sunday, March 22, at 5 p.m., the Boardwalk and beach, including beach access points, were closed to all nonresidents until April 15.

Residents are allowed to walk their dogs and exercise on the beach and Boardwalk, but are restricted to groups of two adults and children.

Exercises, such as a surfing, are also permitted.

Boardwalk restaurants may remain open, but must do carry out services, only.

Although the mayor holds authority to issue emergency declarations sans a City Council vote, he took the matter to the council and received its support in a six-to-one vote.

The only opposition came from Councilman Matt James, but not because he opposed the decision overall.

“The closure of the Boardwalk to nonresidents is not enforceable,” James said, pointing out that officers did not have the legal authority to go up to people and demand proof of residency. “The Ocean City Police Department, in my opinion, has better things to do.”

Nonetheless, he voiced his gratitude to the mayor for allowing the decision to be made collectively.

“The group collectively made some tweaks to it, and ultimately I think what was passed implemented what the goal of the group was,” James said.

The mayor’s declaration was followed by further restrictions imposed by Gov. Larry Hogan on Monday, who announced that all non-essential businesses, organizations and other establishments were to close effective 5 p.m.

“Unfortunately many people are still not taking this [pandemic response] seriously,” Hogan said. “There were crowds of people visiting the cherry blossoms in Washington D.C., and large gatherings on the beach in Ocean City and on the Boardwalk … Let me repeat once again as strongly as I possibly can — if you are engaged in this kind of activity, you are breaking the law and you are literally endangering the lives of your family, your friends and your fellow citizens.”

Currently, the state has 580 confirmed cases of COVID-19, or the novel coronavirus, and four death, as of Thursday, March 26.

As reported by NPR, the novel coronavirus is two times more contagious than the flu — the former infects two to 2.5 people versus the latter’s 1.3 people.

Every year, about 8 percent of the general population contracts the flu, and the flu typically wanes in warm weather.

For the coronavirus, scientists estimate anywhere from 25 percent up to 80 percent of the population would become infected without drastic actions taken by individuals, local, state and the federal government.

Additionally, of those already infected roughly 20 percent of coronavirus patients suffer conditions severe enough to warrant a hospital stay, which is 10 times the number of people who go to the hospital because of the flu.

Perhaps the most glaring difference is that there is no vaccine or cure for the coronavirus, as there are for the flu.

As reported by the New York Times, experts around the world agree that extreme social distancing is one of the most important tactics people can use to stop the spread of COVID-19, and Ocean City has joined a multitude of cities, states and countries in that effort.

“We are in uncharted territory right now, and it’s requiring us to take some measures that we normally wouldn’t even consider, but this is a pandemic that we are facing,” Meehan said. “I think it’s important for all of us to stand together, to work together and to do everything we can to help stop the spread of this virus, to save lives and to hopefully look forward to better times ahead.”

Partly cloudy with a slight chance of thunderstorms. High around 85F. Winds SSW at 10 to 20 mph. Chance of rain 30%.